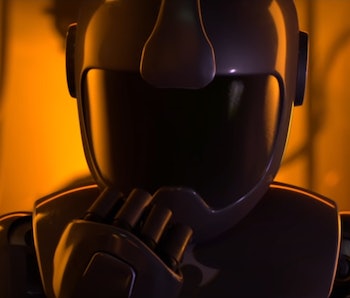 We owe it all to Toonami. While anime spent decades arriving on western shores in irregular stages — and often with new titles, like Astro Boy, Speed Racer and Battle of the Planets, which scrubbed away evidence of their Japanese origins — the explosion of anime in the late ‘90s is found in two main entities: Pokémon and Toonami. We’re here for the latter.

Toonami went live on March 17, 1997. In an era where streaming services deploy inhuman algorithms to make fumbling guesses at what we’ll watch or listen to next, Toonami was the first broadcast programming block to curate for its audience. Even now, Toonami’s particular passion through careful brand packaging, which implies reverence and respect for the art it airs on TV, is absent from streamers that try to be everything to everyone.

Toonami was conceived by Turner-owned Cartoon Network as a means to showcase cartoons for an older audience. Its initial launch consisted of reruns of ‘80s hits like Thundercats and Voltron, but in 1999 Toonami rebooted. It refined its identity, anchored everything around an ultra-cool mascot, T.O.M. (voiced by voiceover legend Steve Blum) inside an original science fiction universe. Every Toonami promo was scored with bass and drum heavy hip-hop composed by Joe Boyd Vigil, which not only lent a manicured identity that differentiated Toonami from Nickelodeon and Cartoon Network, but appealed to the many Black and Brown audiences who tuned in.

“We knew that Toonami and Dragon Ball Z in particular over-indexed with boys, and even more with minority audiences,” said Jason DeMarco, a former associate creative for Toonami in a 2015 interview with Inverse. “We always used a lot of hip-hop, as well as drum and bass, so not only were they seeing a show that appealed to them [but we had] the music, and the way it was presented was appealing to them much more than other kids networks were.”

For Toonami, branding was everything. Along with sly humor — “Pardon Our Dust” is the title of one iconic network promo splicing the carnage of Dragon Ball Z and Gundam Wing — Toonami eschewed the corny tones that packaged other anime blocks on American TV. It’s impossible to fathom how differently anime was understood by the mainstream 20 years ago, and it’s because of the influential role Toonami played in adjusting perceptions.

You can see it in contrasts: Compare how Saban branded Dragon Ball Z for syndication versus how Toonami did it. Which one doesn’t make you feel stupid for watching orange-clad karate masters shooting laser beams? Toonami defined not only the atmosphere for anime in America for years to come, but the subculture too.

Most of Toonami’s content came through licensing deals, but how they arrived felt personal. Toonami had the voice of your friend’s cool older brother, someone passionate about showing you the music and movies you’d never find on your own. As YouTube video essayist kaptainkristian said in a 2017 piece, “Toonami understood its audience. Its goal was to speak to kids directly, rather than down to them.”

Because Toonami had the responsibility of introducing anime to a wide audience, it did much to educate young viewers. Toonami was many people’s introduction to Hayao Miyazaki, and scheduled themes around anime’s diverse styles and genres. In programming Cowboy Bebop alongside Sailor Moon, Toonami revealed to its audience how varied anime can be.

Miraculously, Toonami hasn’t gone offline. It was cancelled in 2008, but ever since its revival in 2012 it has maintained its place on the airwaves even when anime has proliferated on streaming. And the humans behind Toonami are still there; the block has recently used its platform to express solidarity for Black Lives Matter and #StopAsianHate. Many other brands have done the same, but Toonami has been keenly aware of who its audience and artists are in a way many have not.

It’s unknown what future awaits Toonami. As media distribution and access evolves, it’s far from a guarantee that Toonami will still be broadcasting another 25 years from now. But we’ll surely still be watching anime, and we’ll be doing so because Toonami showed us how.