What happens after someone else makes your movie?

My heart will go on 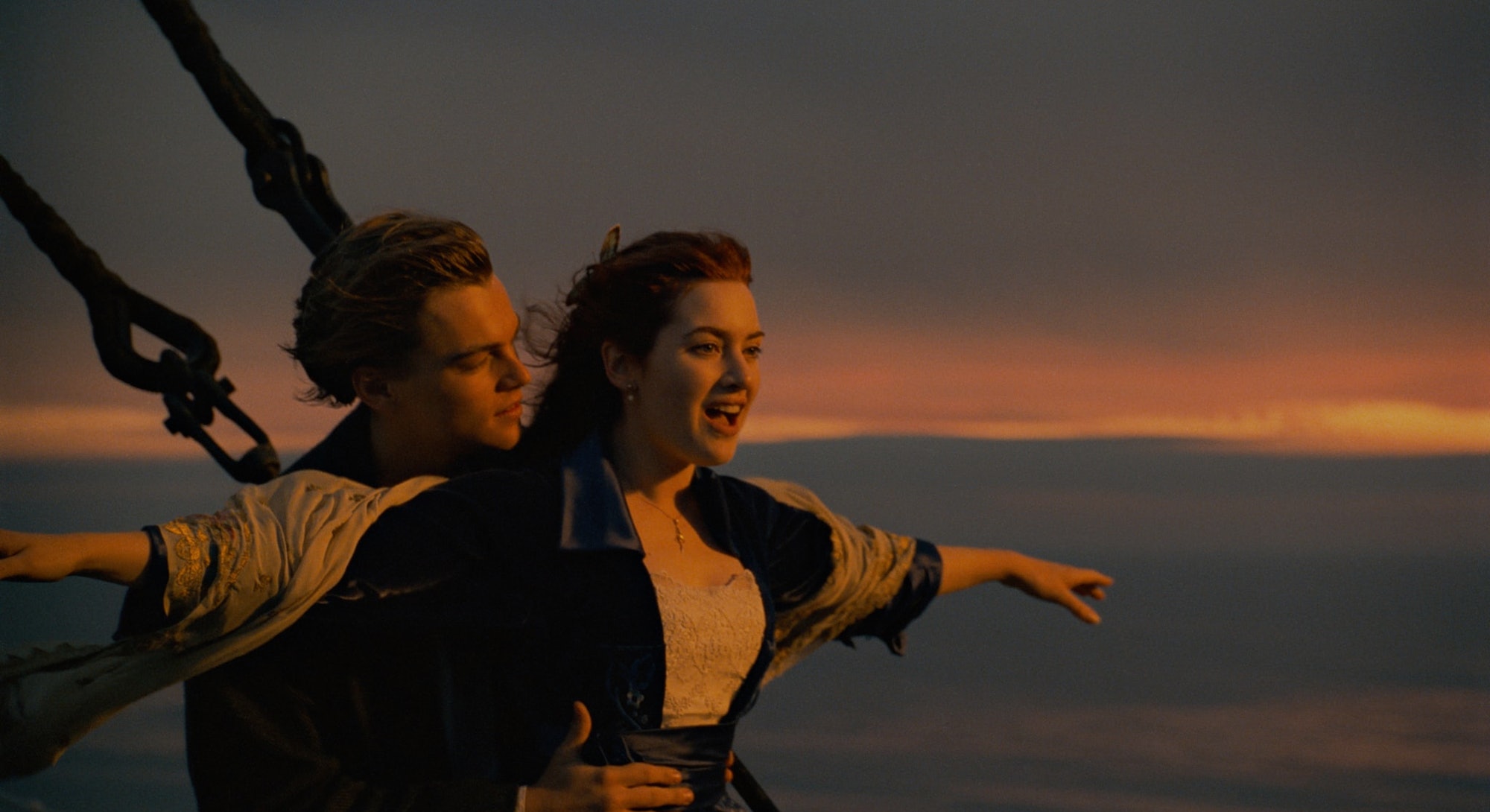 In early 1997, Liz Smith walked into Rag Time Thrift in Mountain View, California and discovered a Thomas Hardy poem about the Titanic.

The 17-year-old had been in search of books that could inspire guitar songs. One section of “The Convergence of the Twain” made a particular impact on her: “And as the smart ship grew / In stature, grace and hue, / In shadowy distant silence grew the Iceberg too.”

Smith liked going to local theater and was a member of the Shakespeare Club. Suddenly, thanks to Hardy's three lines, she had the starting point, not for a song, but a play of her own. She decided to write about a wealthy boy and a poor girl falling in love aboard the Titanic. The love story would be doomed, of course, the audience well aware of the fate that befell the ship. In Smith's version, inspired by Romeo and Juliet, both lovers would die at the end, going under with the boat while the stage was lit with the blue hue of a moonless sky.

About six months after Smith read the poem, she abandoned her play when a specific film happened to come out: James Cameron’s Titanic.

The similarities shocked Smith. The stories shared several scenes and the class divide between the two lovers, but the likeness was entirely coincidental. She adored Titanic, especially its historical accuracy. “There was probably a tinge of ‘Oh no!’” she tells Inverse, but since she wasn’t a working screenwriter, she found the parallels exciting rather than heartbreaking. Her script and James Cameron's were like the iceberg and the Titanic, on independent paths but destined to collide.

“We tell the same stories over and over and over again,” says Smith who, by a quirk of fate, later ended up working for Robert Ballard, the man who found the wreck of the Titanic. “But sometimes certain high concepts can't be done again. Romeo and Juliet, you can do a million times, but Romeo and Juliet on the Titanic? That idea is now burned. You can't do that again.”

“Romeo and Juliet on the Titanic? You can’t do that again.”

Writers are bound to have similar ideas. No concept is so original that no one else will ever think of yours. But how does it feel when you've poured your heart into a story, only to see that someone else had the same brainwave? How do you cope when all of your hard work is wasted? Five screenwriters tell Inverse all about this specific agony.

Not The Right Time

During his undergraduate screenwriting program, Michael Winn Johnson was derisively known as “Mikey Hollywood” because he was all about blockbusters. In 2001, he began developing a script called The Clockmen.

Clockmen was the story of otherworldly beings who act out a plan dictated by Time, an omnipotent figure representing God. Each morning, Time would slide a file down an immense table to the two clockmen, and they would visit Earth to ensure that various events in different time periods occurred according to the predetermined plan. One clockman, who questions the plan, creates serious problems when he falls in love with a human.

Johnson knew just what his story should look like. Influenced by the 1998 Alex Proyas film Dark City, he imagined the clockmen wearing trench coats and fedoras. Borrowing from Beetlejuice, he had them draw a door in the air whenever they needed to change eras. By 2003 he had written the full script and begun pitching it around Hollywood.

Plenty of studios were interested, but none committed. Eventually, Johnson called it quits. Five years later, he was back home in Canada when he saw a trailer. It was for a film starring Matt Damon and Emily Blunt.

The plot of The Adjustment Bureau is almost identical to The Clockmen. The titular bureau ensures that a precise “Plan” is carried out, and its trench coat and fedora clad agents answer to someone called the Chairman. They can travel instantly between locations using a simple door and, when Matt Damon's character tries to pursue a woman he’s fallen for, the Bureau puts obstacles in his way to prevent him from falling out of step with the sacred Plan.

The Adjustment Bureau is based on the Philip K. Dick short story “Adjustment Team,” but Johnson had never read Dick's work. “When I first saw the trailer I felt angry more at myself,” he says. He never felt that Universal, to whom he recalls pitching the idea, stole the concept from him.

“I've seen enough films to understand that people get inspired and borrow from other films anyway. Nothing's 100% original, but it wasn't until I watched it and I realized the level of specificity and the level of comparison that I went, ‘Wow, that’s really weird.’”

Johnson says The Adjustment Bureau “obliterated” any lingering hope of getting his movie made. The film was so visually similar that he couldn't do what he wanted with the aesthetic of The Clockmen.

Sometimes, two individuals working separately have similar ideas and the world just rolls with it. In Hollywood, the phenomenon is known as “twin films.” Deep Impact, a film about a comet hitting Earth, was released in May 1998, while Armageddon, a film about an asteroid hitting Earth, was released in July. In January 2011 came No Strings Attached, a rom-com about two friends who have casual sex but end up falling in love. Six months later, Friends with Benefits was released. You can probably guess what it was about.

As Liz Smith points out, this happens in other fields too. In science, the phenomenon of different people independently reaching the same conclusion is called “multiple discovery.” A good example is calculus, which was developed by both Isaac Newton and Gottfried Leibniz. Sometimes, one inventor is doomed to obscurity — who remembers that Joseph Swan also invented the lightbulb? On the topic, his better-known counterpart Thomas Edison said, “My so-called inventions already existed in the environment – I took them out, I've created nothing. Nobody does.”

But in entertainment two ideas are sometimes just too specific to co-exist, especially if one is written by an amateur screenwriter. Takeo Hori was fresh out of film school at New York University when he came up with the plot for The Closed Door. A man sees a woman shot near a phone booth. After the body disappears, he realizes he can see the booth from his apartment so sets up a camera to film it. When he walks by soon after, however, he picks up the phone ringing inside and a sniper threatens to shoot him just like he shot the woman.

Shortly after, Phone Booth came out.

“I just dropped it,” says Hori. He was really upset, but “it was like a tree falling in the forest.” Ideas can’t be copyrighted, and no one knew who Hori was so he had no choice but to move on to another idea. Now, he says he does a thorough search before writing a screenplay to ensure he won't be burned again.

Few people have been burned more than David Stokes, a screenwriter in his 40s who’s realized at least three times that someone managed to steal his thunder. In 2016 he was watching Shark Week with his then-wife and thought that a film about two people being trapped in a shark cage at the bottom of the ocean would make for a brilliant premise. “It was an idea that just wouldn't go away,” he says.

About four months later and 40 pages in, he checked the Empire website and felt his heart sink to his knees. He saw the trailer for 47 Meters Down, a film about two people trapped in a shark cage at the bottom of the ocean. He still can’t bring himself to watch it.

The same thing happened in 2014 when learning of the horror film Ouija stopped Stokes’ work on a similar ouija-centric script. But the worst was in 2008. Stokes had gone through the effort of writing the first draft of a two-and-a-half-hour script about a retired wrestler called Sick Mick. Then he learned about The Wrestler.

“It's great,” Stokes' agent said of his script, “but if [The Wrestler] turns out to be massive, you've got no chance.” Mickey Rourke won a Golden Globe and was nominated for an Oscar.

If there’s any consolation here, it’s that if your idea has been turned into a multimillion-dollar film then you’re thinking along the right lines for a screenwriter. “I was clearly coming up with ideas that were being made into movies,” says Stokes. “I just hope it never happens again.”

What these screenwriters are going through can be considered a form of grief, according to Sue Morris, director of bereavement services at the Dana-Farber/Brigham and Women’s Cancer Center. What makes it even harder is the unusual nature of the loss.

“It’s a loss that is kind of invisible to others,” Morris says. “And I think that’s hard, right? It’s a very isolating loss because no one else is experiencing it in the same way that you are.”

She recommends acknowledging that the loss is real and allowing for a period of mourning. She also highlights the importance of getting back into a routine, looking after yourself with exercise and healthy food, and connecting with people who are empathic, rather than people who want to “fix you.”

“It’s a loss that is kind of invisible to others.”

Like friends reassuring you after a break-up that there are other people out there, “Mikey Hollywood” Johnson says there will always be more ideas. Since swapping screenwriting for teaching, he’s come to believe in fate. “Something will happen, and it was always meant to happen, and the stuff that's happened to you led you to that.”

You might even recognize that your life wouldn't necessarily have been happier if it had been your name on the big screen. It’s an idea Johnson managed to make peace with. “Maybe I didn't make millions of dollars on a Matt Damon movie,” he says, “but I'm living a pretty blessed life.”