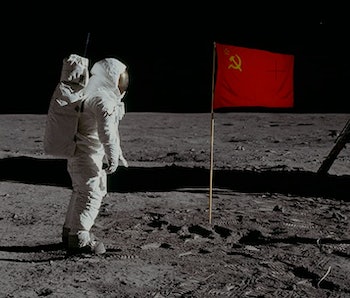 From Avengers: Endgame to Looper, any fictional story about time travel has to deal with one simple fact: time travel doesn’t make any sense. While aspects of time travel exist in the real world — like when scientists gaze deep into the far reaches of the Universe and see what ancient stars looked like — that's not what Doc Brown was talking about in Back to the Future.

In science fiction, time travel about physically transporting oneself into the past or the future — and then dealing with the consequences of those actions. And there's one underrated movie streaming on Amazon Prime that deals with these issues in a totally unique and amazing way.

The History of Time Travel is a fun movie that puts the focus on those consequences. Through the lens of a faux documentary, it explores how one family continually wreaks havoc on the timeline of the 20th century. It’s a family saga meshed with a loving ode to time travel stories of the past, everything from H.G Wells to Back to the Future.

One note: The History of Time Travel was director Ricky Kennedy’s college thesis film, and it really does feel like it. Not that there’s anything wrong with college movies, but the lack of budget shows in the movie’s settings, props, and performances. No one would mistake this for the History Channel documentaries it parodies. But like The Vast of Night, another zero-budget sci-fi movie streaming on Amazon Prime, History of Time Travel makes up for its lack of polish by leaning into aesthetics.

For Vast of Night, that was its eeriness. For History of Time Travel, it’s an earnest love of its topic — and a willingness to get goofy.

History concerns itself with the saga of the Page family, who over two generations shape time travel and the course of human history. It all starts with patriarch Edward Page, a scientist who joins a World War II-era secret government project known as the Indiana Project. After the war ends, Page’s work consumes him, to the extent of ignoring his polio-stricken wife (credit where it’s due: the movie references a 1949 polio epidemic in Indiana which actually happened. Kennedy is clearly a fan of details).

She dies leaving behind a boy, Richard, who follows his father into physics and eventually builds a time machine using Edward’s notebook after his own death. Using this time machine, which incorporates an old Atari gaming system, Richard kicks off new timeline after new timeline. The movie illustrates this by having its documentary talking heads suddenly change their stories mid-interview.

It’s a cute gimmick that also plays out in the movie’s background. Slowly but surely, a globe in one interviewee’s background grows redder and redder, reflecting the Soviet Union’s growing dominance in the world thanks to their theft of the Page time machine. Portraits behind a military general change back and forth between Barack Obama and Hillary Clinton.

Talking heads mainly convey the information in History of Time Travel, but that information is always changing.

As the Pages grow more obsessed with righting the wrongs of their new timelines, the changes in the movie start becoming more elaborate and complex. These changes are never really explored—what does a Soviet-dominated world look like beyond certain historical moments being altered? Everything seems pretty much the same in The History of Time Travel.

That’s the challenge of time travel: the changes being explored here are so huge that getting into any detail would risk making a very plot-heavy story even more confusing. But at an hour and ten minutes, The History of Time Travel never wears out its welcome. There are fun alternate timelines, Easter eggs galore, and a family drama grounding it all together.

The History of Time Travel is streaming now on Amazon Prime in the U.S.

More like this
Culture
Jan. 19, 2023
28 Days Later is still the greatest zombie story of all time — and it’s not even close
By Jake Kleinman
Culture
Jan. 28, 2023
Sci-fi legend René Laloux’s final movie is his most opaque — and maybe his best
By Jake Kleinman
Entertainment
Jan. 23, 2023
Animalia is an alien invasion movie with metaphysical dreams
By Andy Crump
LEARN SOMETHING NEW EVERY DAY.
Related Tags
Share: