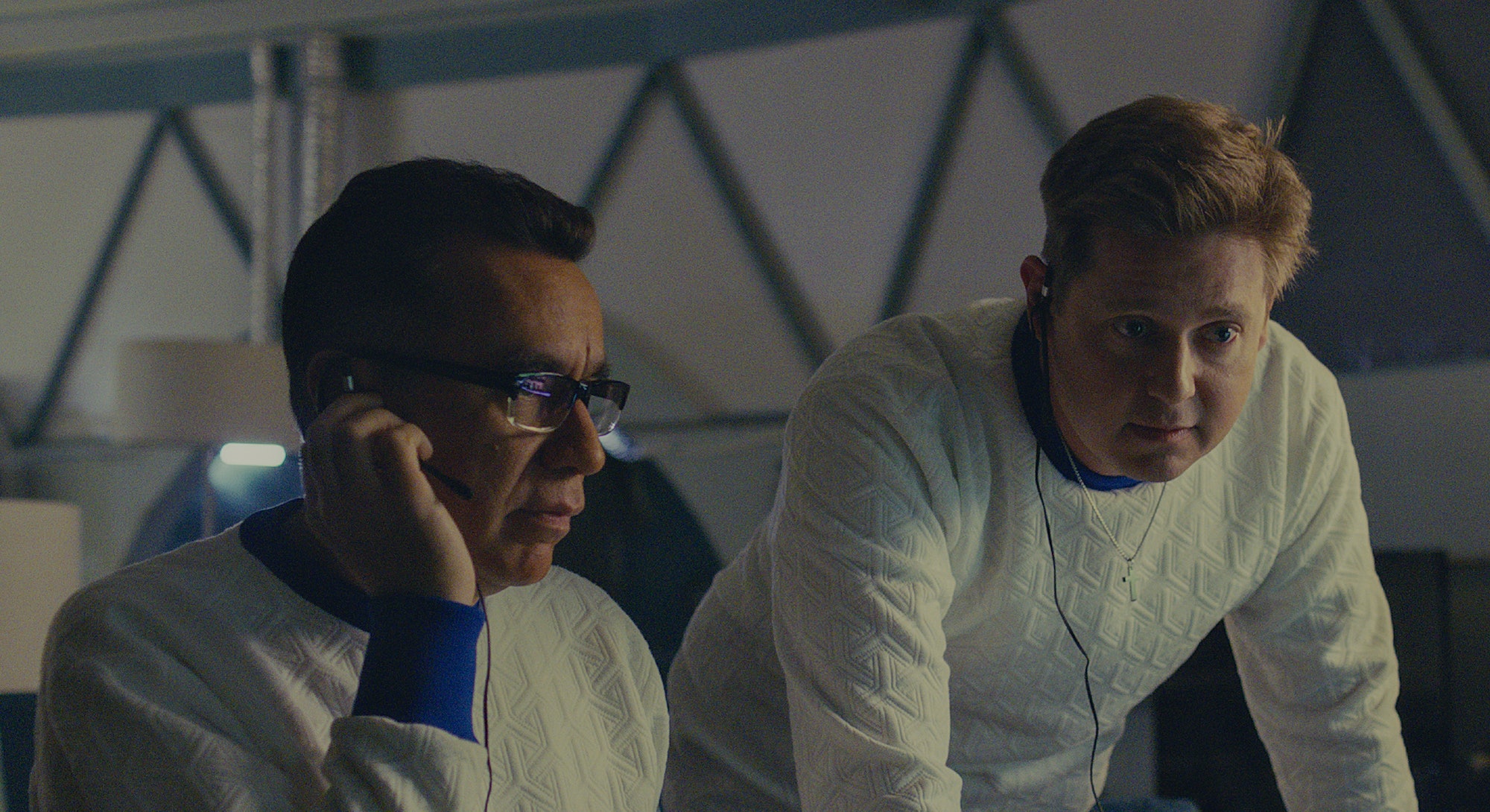 You probably know Tim Heidecker as half of the absurdist comedy show Tim and Eric Awesome Show, Great Job!

Or maybe you caught his brilliant standup special on YouTube. But on his new show, Moonbase 8, Heidecker tries something new: he plays a washed-out, middle-aged American Christian dad with 12 kids. Oh yeah, and he's an astronaut, too, which confuses that whole science and religion thing.

“It's about this guy who, let's put it this way, the audience is a bit ahead of him when it comes to the real deal,” Heidecker tells Inverse.

In the trailer, these goofy spacemen-in-training keep busy in a lonely outpost in an Arizona desert (though it was shot in Simi Valley, California), batting to keep their sanity in isolation (most of us can relate). Whether it’s getting caught in a windstorm, drinking purified urine, or chasing down a garbage bandit, the baseline is pretty much summed up in the trailer when Armisen says, “Let’s show NASA we know what we’re doing.”

There’s extra star-power, too, as the group gets shamed by hipster Tesla employees, one played by Queen singer Adam Lambert, who has a goatee and reeks of pretension.

Heidecker also recently released a new album called Fear of Death and first standup special An Evening With Tim Heidecker on YouTube. In an interview, he discusses his NASA stunt double, playing Beatles covers with his co-stars onset, and why he didn’t watch Netflix’s Space Force.

Why are there so few comedies about outer space and NASA, and the ones that are, aren’t… funny.

It depends, how do you look at it?

We’re fans of the genre of sci-fi. I do think it’s a little hard to do both at the same time, sci-fi and comedy. The trick we used is that we’re not really in space. One of the jokes in the show is this simulation and cosplay of adults pretending to do things, it's always a good start for comedy, I think. We take it seriously, the mission, and the idea that these guys have this true ambition to do this.

But why aren’t there any comedy space shows? For real, though.

Well, I don’t know. The intention for us, since the beginning, was to find an environment for the three of us to waste time together. This idea of forced isolation, as we’ve all been experiencing this year, this idea of being stuck together, stuck inside. This idea of NASA and space came as a secondary idea, but it's fun — and I hate to say this — but it’s a fun sandbox for us to play in. There are lots of fun gadgets, toys, and tools, lots of ways for us to screw up, which is just good for comedy.

Did you see Netflix’s Space Force? Did you find it funny?

I didn’t watch it. It’s a weird thing for me as a comedian, and some other people are different, but I don’t like to watch a lot of comedy. I either find myself thinking, "Damn, why didn’t I come up with that idea?" or, "why aren’t I in this show?" A variety of emotions. TV is about escape and relaxation, it’s a distraction, when it starts feeling like it’s a part of my job, I would rather watch a murder mystery or a documentary on The Kinks.

When you were shooting, did you really get drop kicked when your character was flirting with Diandra Lyle, or was that a stunt double?

That was a stunt double. I was so embarrassed when I came out to see the stunt double because stunt doubles are usually pretty fit people, they’re usually in good shape. This guy who was my stunt double had a pillow in the front of his jumpsuit to represent my beer belly. My gut. I thought, "Oh man, that’s what I look like?"

Were there any on-set bloopers that didn’t make the cut?

We’re pretty professional. It was all well-planned, of course, there’s going to be some screw-ups, but between takes, John, Fred and I went off into our bunks, our bedrooms, and we would play music. We brought our guitars and played Beatles songs. We brought a Beatles guitar book. Fred is so funny and we did characters. If we did it again, I think seeing that side of it is almost as good as the show. The natural silliness of coming up with ideas, and the time-wasting that goes on in a production, where you’re just waiting for the cameras to move, is a very fertile period of being funny and silly.

Do you think being an astronaut could be boring?

Yeah. We’ve all seen those videos of astronauts in their space stations flipping around, and you think, what do you guys do when you’re not flipping around on camera, showing how the toothpaste goes up in the air. That can’t be fun after a few hours. Then it's sort of like, okay, now what do I do? Read a book? Answer some emails?

Did you eat space food?

No, I didn’t. But we live in Los Angeles, and there’s two very different versions of the modern space program here: JTL, the Jet Propulsion Laboratory, which is government-associated with university, the west coast NASA, basically. It's extremely academic and serious, a little dorky. It has a university feel to it. Then on the other side of town, near the airport, is SpaceX, Elon Musk’s company, which is the opposite of that, it's fast. You can see them building rockets. We went and talked to people. We confirmed what we suspected in this situation: we watched a lot of YouTube videos, there are a lot of space simulation projects out there, where people are living in a dome, trying to be true to how it is up there.

There’s a part in the show where the Tesla kids pay a visit, they’re this punk, cooler-than-thou hipster group. Was that inspired by your research trip to the actual Tesla grounds?

Yeah, it was inspired by seeing those people working. For comedy’s sake, you rank it up and exaggerate to make it more ridiculous than it would be, but Adam Lambert’s character who has a goatee, that was in NASA, was this punk rock dude [engineer Bobak Ferdowsi], where everyone was like, "This guy is the face of NASA, we gotta make NASA cool." There’s a lot of things from the real world that we drew inspiration from. There’s a lot of relatable things from the show. While it's extraordinary to do a space program, there're a lot of relatable human feelings throughout the show.

You play a character who is a Christian with 12 kids, who is probably from middle America. He Facetimes with his wife, who is lost in this zoo of children, which is hilarious. What’s the background of his character?

It's about this guy who, let's put it this way, the audience is a bit ahead of him when it comes to the real deal. There are families like that out there, though, people with a ton of kids and their identity is based around the family. The comic side of that is that he’s encouraged to go off and live on the moon for a period of time. It feels like a silly concept, too. I’m a pasty, pudgy white dude from Pennsylvania, so whenever I get a chance to play someone like that, it's not the biggest stretch. I have two kids and that’s probably about it.

Is there the possibility of Season 2?

I hope so. We made it in an unusual way, with A24, the way you’d make an independent film, just full off the grid of the network cable world, and then sold it to Showtime. If people like it and we can get together again, why the hell not?