“Every year it gets likelier.” 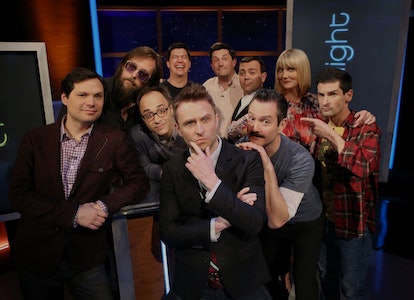 "Every year it gets likelier and likelier The State will do something," Lennon tells Inverse.

As he explains it, during a recent benefit show they performed on Zoom, "Dave Foley from Kids in the Hall joined us to do a little bit with us.[...] Jokingly, I said maybe when COVID, when there's some sort of vaccine or something and theaters open, I was like, what about a State-Kids in the Hall Monsters of Rock tour, together?"

That's an idea worth exploring, to be sure. But exactly what is The State?

Thomas Lennon's sketch comedy supergroup gained national attention on MTV in the early '90s, first, as part of the Jon Stewart-hosted program You Wrote It, You Watch It, before going on to lead their own successful sketch series.

Lennon and company didn't want to create recurring characters for their show, but MTV's demands brought forth the inception of Ken Marino's Louie and his memorable catchphrase, "I'm gonna dip my balls in it." And surprisingly to the crew, the network wanted more.

Tapping into their theater school roots and a punk rock mentality that Thomas Lennon compares to that of The Clash, the group went all-in on bringing their best characters to the fold in the show's third season in the unexpected form of a live Kabuki Theater stage play.

"When they said please do some more Louie sketches, I wrote one which was actually called 'Kabuki Doug'," He tells Inverse. "We did a full Kabuki play with all of our recurring characters based on a real Kabuki storyline called 'The Love Suicides at Sonezaki.' And we did it in Japanese."

So now what? We've got vaccines and there's talk of theaters opening up in the coming months. Will this Monsters of Rock tour of weird '90s comedians actually take place? It better. After all, Louie's balls aren't going to dip themselves.