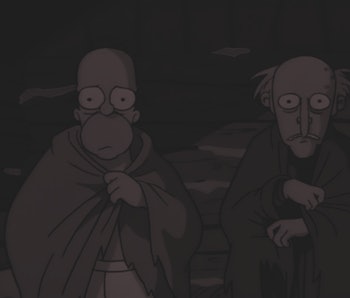 Events canceled. Trapped inside. Slowly losing sanity. Pants quickly deemed optional. There’s a Simpsons episode for everything, but the definitive Simpsons episode for quarantining has to be “Mountain of Madness,” the 1997 classic written by John Swartzwelder and directed by Mark Kirkland.

By 1997, The Simpsons had reached a level of cultural dominance. The moment was one of slowly emerging trends, as the televised monoculture began to crack and the wide world of the Internet was just starting to emerge. As Sean O’Neal of A.V. Club noted, by the show’s 8th season it wasn’t just going after audiences and mainstream critics, but was also “in the early stages of its tense alliance with the internet,” then taking the form of newsgroups.

Facing increased pressure and the risk of online fans deeming stale plots “worst episode ever,” the show responded by taking the family out of their well-known environs — both on Evergreen Terrace and Springfield in general — as often as possible. The season opened with the Simpsons leaving Springfield for Cypress Creek in “You Only Move Twice,” entered a burlesque house in “Bart After Dark,” and stepped into a metaphysical plane in "El Viaje Misterioso de Nuestro Jomer (The Mysterious Voyage of Homer)."

But of all these excursions, “Mountain of Madness” might be the best. It opens with a bored Mr. Burns at the nuclear power plant deciding to shake things up with an old-fashioned fire drill. The plant quickly turns to nihilistic chaos, with panicking employees desperate to get out by any means necessary (a bit like people leaving New York as the Covid-19 pandemic hit). Horrified by their poor teamwork, Mr. Burns demands the plant go on a team-building retreat to the snowy Mt. Useful, home to America’s “strategic granite reserve.

Like many of the episodes at this moment, "Mountain of Madness" is chock-full of visual gags and classic quotes that would take a whole article to write about. Just up to this point, there’s Burns saying “you’ll get more than you bargained for,” Homer telling Bart that “your ideas are intriguing and I wish to subscribe to your newsletter," Lenny anxiously waiting for coffee, and the family car crashing into every other car in the parking lot.

But the plot truly begins when the family splits up as the power plant's team-building day begins. Homer gets inadvertently paired with Mr. Burns on a race to a cabin on the mountain where the last employees will be fired. Then, Burns easily convinces Homer to cheat with the air-tight logic of asking, “Why should the race always go to the swift, or the Jumble to the quick-witted?” (A bit of a throwback reference: the Daily Jumble was a small word game that appeared in newspapers and was generally seen as very easy).

The two go merrily through the snow on “horseless sleigh” (a snowmobile) and easily reach the cabin. A friendship starts to form, with Homer teaching Montgomery new ways to be lazy. But then, while celebrating their ill-gotten gains, the two accidentally cause an avalanche, trapping them in the cabin.

Here's where the quarantine metaphor comes rushing out. Burns and Homer do their best to stave off cabin fever for a while, at first digging through their avalanche, only to have several more trap them. Then they take up hobbies, building snowmen. Then they lose their minds.

They give their snowmen all their clothes, and then fear them as upper-crust monsters. They hallucinate armies for each other, with Burns backed by snowmen in Pith helmets and German World War One attire, while Homer claims to be protected by “powers..political powers!” and is quickly joined by figures ranging from Mao Zedong to Abe Lincoln.

Producer Josh Weinstein has spoken in DVD commentaries about the script needing to be retooled, how the fan-favorite writer Swartzwelder’s scripts resembled a “finely tooled crazy German machine and if you have the wrong engineers try to fix it, it blows up.” The script for “Mountain” needed to be polished a few times, and some of the more “insane” jokes were cut

There’s no telling what might have been, but the episode ends with the cabin turned into a rocket house and riding to freedom. Burns and Homer recover from their incident but still glare at each other with conspiratorial glances, not quite through with their paranoia.

As Covid-19 has shown, even when it seems like you’re done getting trapped inside, you’re not quite done yet. Just like Burns and Homer, we'll probably never get over our own quarantine experiences — at least not until the next episode begins.

The Simpsons is streaming now on Disney+.