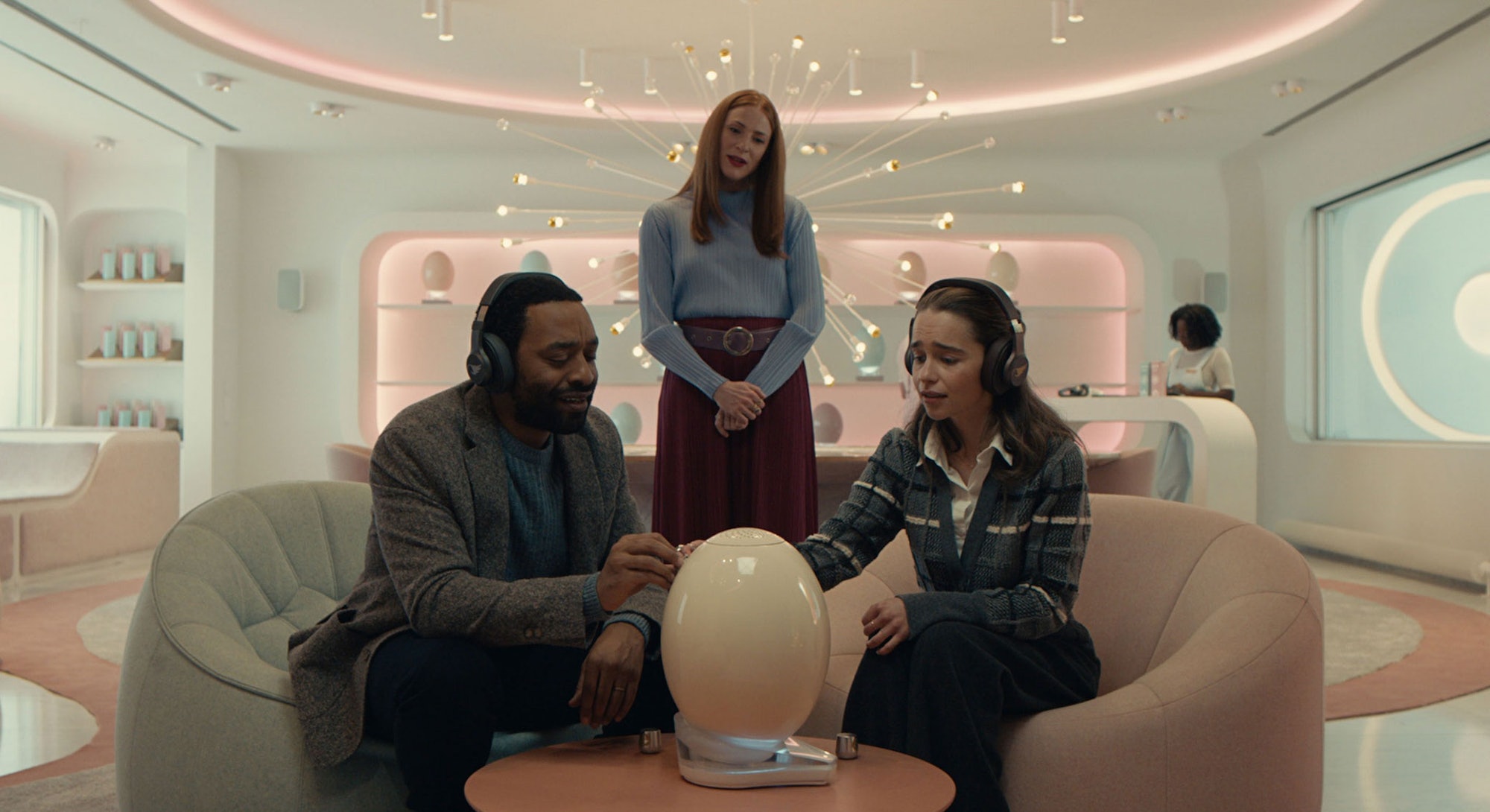 In the not-so-distant future of The Pod Generation, technology threatens to render nature obsolete.

Sophia Barthes’ gentle, pastel-hued sci-fi film introduces a quasi-utopian society in which ever-present AI assistants prepare the morning coffee, monitor “bliss indexes,” and conduct therapy sessions in Zen-like wellness chambers. Instead of going to the countryside to take in the great outdoors, people unwind in nature pods and swing by fresh air bars to enjoy deep inhales from oxygen masks. Everything feels comfortable and pleasant, because it’s been designed that way.

New York couple Rachel (Emilia Clarke) and Alvy (Chiwetel Ejiofor) have grown more-or-less accustomed to chipper virtual interfaces insinuating themselves into their everyday routines. Of particular interest to Rachel is an in-demand service called the Womb Center — presented as a perk of her role as an executive at an AI tech company — which vows to take the labor out of pregnancy by allowing parents to incubate fetuses in detachable artificial wombs, called pods. The absurdist technicalities and emotional fallout of outsourcing this innate biological process are the driving ideas of Barthes’ film, an intriguing if trifling social satire.

Almost diametrically opposed to Rachel, her partner Alvy works as a botanist and at his happiest tending to plants in a greenhouse, where he educates college students about the secret beauty of the natural world they’re in danger of disconnecting from altogether. “We’ve decided at some point that nature was a commodity, and that’s when everything started to unravel,” Alvy tells Rachel early on. Be that as it may, Rachel’s rather struck by the idea of “extending the family,” as her HR director so insidiously puts it, in a way that won’t disrupt her work. (Quietly, this “corporate benefit” is precisely that, intended to phase out the costly inconvenience of maternity leave.) And so Rachel applies for a spot at the Womb Center, only informing an incredulous Alvy after she gets one.

Inside the center, where director Linda (Rosalie Craig) delivers one polished-to-a-high-gloss lecture after another, Rachel and Alvy discover the pods — gleaming, translucent eggs that appear to have fallen off the back of an Apple truck — are equipped with endless features to nurture, sooth, and stimulate their unborn baby, all the way from fertilization to birth. Mozart, whale sounds, even remote feeding are all easily accessible in the app. Despite Alvy’s reservations about technology interfering with this most intimate stage of his relationship, the couple agrees to give the pod a go.

The Pod Generation is frustratingly content to linger on its soft-edged surfaces when it should be digging beneath them.

The Pod Generation is a lightly amusing, slightly familiar conception of a society in which convenience has overtaken connection as a primary human pursuit. Heavily reminiscent of Spike Jonze’s Her — a far superior work for its more pronounced sense of longing and isolation — the film’s monochromatic visual aesthetic gives off the same gentle candy glow; everything is rounded in sterile whites, delicate pinks, and baby blues. Barthes, whose 2009 feature Cold Souls concerned the plight of an anxious man who decides to have his soul extracted (it doesn’t help), is working in a similarly wry, satirical vein with The Pod Generation. She adorns the film’s calmingly uniform blend of domestic and professional spaces — all reflecting a modernist architectural aesthetic, placing a premium on exposed wood, clear glass, and tactile fabrics— with indications of Big Tech’s controlling influence on society ahead of the singularity (which is expected soon, of course). Rachel’s virtual therapist, for example, appears as a large eye ringed by digital flowers and voiced by Kathryn Hunter; in a flat, soothing voice, it implores her to open up, tells them “attachment parenting is obsolete,” and eventually suggests that it could even initiate sessions with the baby itself, in vitro.

Even outside of Rachel’s office, where she doesn’t remove her black business pumps before walking on the treadmill, people’s eyes remain laser-trained on their smartphones; much of Alvy’s consternation at the state of things stems from his sense people have lost interest in the world outside of little black rectangles in their pockets. Eventually, it becomes clear that the U.S. government no longer funds education; the omniscient mega-corporation Pegazus has instead picked up this responsibility, which makes its commitment to normalizing pod-grown babies feel all the more nefarious. Is this new technology designed to make daily life more convenient, or to make people more compliant? After all, the next generation won’t even dream. “Dreaming is not a primordial function,” justifies Linda. “Dreams do not serve any evolutionary purpose.”

A long way from Game of Thrones, though amusingly still invested in hatching eggs, Clarke remains an unfortunately blank screen presence but is at her best suggesting Rachel’s growing unease toward the artificial gestation period. This often manifests through gauzy dreams, in which she imagines a more innate and organic connection between mother and child. An even more affecting sequence finds her hand lingering too long on a more traditionally pregnant woman’s belly, enraptured by the sensation of physical touch.

Ejiofor, over-tasked with articulating the filmmakers’ wary view of this brave new world, still fares better than his co-star, though the eventual reversing of roles between Alvy and Rachel — even as she struggles to form attachments with the pod, he becomes emotionally invested, reading it Emily Dickinson poems and sobbing at Werner Herzog’s lost penguin while watching Encounters at the End of the World at home — is more amusing than convincing. And the central question of how and why these wholly dissimilar two people became life partners goes unanswered.

The Pod Generation falters most in its third act, which steers away from the unnerving speculative science-fiction of its first two thirds to deliver a strangely glib and genial outcome for this couple, a too-optimistic happy ending — enabled by a succession of impulsive, credulity-stretching decisions and lucky breaks — that rings insincere given the quietly eerie nature of the near-future Barthes has introduced. And while there’s plenty to savor in the film’s cozy score by Sacha and Evgueni Galperine, the music’s soft, muted mood extends to The Pod Generation as a whole. Settling for an atmosphere of dreamlike placidity at the expense of any truly incisive social commentary, this is a thought-provoking satire made with just too light a touch. The Pod Generation is impressive in its visualization of an artificially advanced tomorrow but frustratingly content to linger on its soft-edged surfaces when it should be digging beneath them.

The Pod Generation premiered at Sundance on January 19 and is available virtually through January 24.