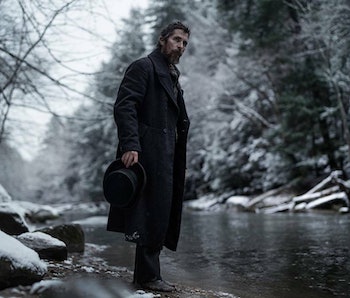 A sequel to the new film The Pale Blue Eye is not in the works. And yet, when you finish watching the film, the first thing on your mind might be: Could this be a backdoor pilot to an awesome Netflix detective show?

Set in 1830, the movie tells the fictional origin story of how horror legend Edgar Allan Poe — played brilliantly by Harry Melling — became so enamored and sympathetic to all things macabre. Based on the 2003 Louis Bayard novel of the same name, The Pale Blue Eye is a psychological horror movie masquerading as a period-piece police procedural. It’s a slow burn of a movie, with a great twist, which will ultimately leave viewers wanting more.

At West Point, in 1830, a young military cadet has been hung, and nobody knows why. Enter Detective Augustus Landor (Christian Bale), a grumpy, yet brilliant investigator harboring a personal trauma intentionally hidden from the audience. Landor is quickly aided in his investigation by another young military cadet, Edgar Allan Poe (Melling). And this is when the movie gets good.

Christian Bale is solid in this film. There’s no question. He’s one of the greatest living actors we’ve got. Period. But, everything transcendent about The Pale Blue Eye belongs to Harry Melling. The novelty of The Pale Blue Eye promises that you’ll get some Poe action, but there’s no way you’re ready for how good Melling is in this part. Instead of imagining Poe as a moody, depraved goth kid from ye olden times, Melling does the unthinkable: He makes Poe naive, warm, forthright, and loving.

Poe’s interest in the macabre doesn’t make him a creepy person, instead, this interest is presented as a layer of intelligence few others possess. Melling presents Poe as the kind of guy you actually would want to be friends with, rather than a master of dark prose whom nobody understands. The performance here is sort of like the opposite of what Ben Whishaw did as Keats in Bright Star. You’re not afraid of Poe, nor are you thinking about how tragic his life will (eventually) become. Instead, you’re rooting for him.

In real life, Poe did really attend West Point, which, unsurprisingly, didn’t work out long-term. But mercifully, the movie doesn’t really dwell on Poe’s future too much. Sure, we see a raven lurking about here and there, but overall, the screenplay from Scott Cooper (who also directed) has a light touch with just how Poe-ish the whole thing is going to get. The story of The Pale Blue Eye is utterly fictional, so, in a way, it’s best to think of this version of Poe as fictional, too.

Part of why this all works is because Poe is basically not the main character. Instead, the background of Bale’s Detective Landor is the focus, with Poe basically as his detective protégé. In this way, The Pale Blue Eye derives its tension as a study of social class strife. Landor is an outsider brought in by an institution (the burgeoning U.S. military) that wants to project an untarnished, upper-crust air of superiority. Landor isn’t one of those people, a fact which he’s reminded of frequently. And, the biggest twist in the film occurs specifically because of this kind of class divide; something in Landor’s past is connected with the impenetrability of certain social rules, rules which he both does, and doesn’t live by.

In this sense, Landor is a conservative mirror for Poe; somebody who is an outsider, but able to play by the rules, at least to a certain point. Of the two of them, Bale’s performance as Landor creates the darker character, which is what gives the film its true Poe-flair. As the film demonstrates, true darkness and true horror are often wrapped up in what appear to be everyday occurrences. Poe learns from Landor that darkness and horror are everywhere. Toward the end of the film, during an intense (and lengthy) denouement, Poe tenderly tells Landor that he “shall cherish” the time he’s spent working on this gruesome murder case.

It’s in these scenes where you really wish this was all leading to a regular Netflix series starring Harry Melling as young Poe, dashing about and solving mysteries. The intent of the film is certainly not about fostering a backdoor pilot for the next Penny Dreadful, and yet Melling’s wide-eyed, charming and unique turn as Poe makes you wish he was on screen more as this character.

The Pale Blue Eye is not a perfect thriller, nor is it a perfect mystery. However, the performances in this unique and unsettling film will stay with you. And if there’s ever a reason why the world needs young Edgar Allan Poe to star in his own film again, or in a TV series, Harry Melling has just given the performance of a lifetime.

The Pale Blue Eye is in theaters now. It hits Netflix on January 6.