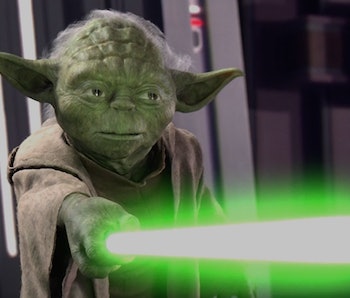 Ignite the green! In The Book of Boba Fett Episode 6, the Star Wars franchise has taken us back to an age-old question that pervades the entire saga: How do certain people get ahold of lightsabers when we’re pretty sure those lightsabers have been lost? The latest mystery is all about Yoda’s lightsaber from the prequel films. Here’s what we know about its journey and how it fits into The Mandalorian and The Book of Boba Fett.

At the end of Boba Fett Episode 6, Luke Skywalker gives Baby Yoda a choice. He can either take Old Yoda’s lightsaber and become a Jedi, or he can take a cool set of beskar armor made by his pseudo-dad, the Mandalorian. This dramatic moment sets up the likely reunion between Mando and Grogu, but it also raises a baffling question: How does Luke Skywalker have Yoda’s lightsaber at all?

When Yoda lost his lightsaber

In Revenge of the Sith Yoda clearly gets his lightsaber knocked out of his hand by Force lightning while fighting an epic duel with Palpatine. George Lucas even gives us a shot of the lightsaber falling into the depths of the Senate. The duel ends after that and Yoda flees.

Yoda didn’t have his lightsaber back when he trained Luke in The Empire Strikes Back, which means the only way that Luke could have Yoda’s lightsaber in The Book of Boba Fett is if Luke went to Coruscant to dumpster dive at some point.

But wait a minute. Some people say Yoda had a second lightsaber.

People losing their lightsabers is a Star Wars tradition. Luke lost Anakin’s lightsaber in Empire. Anakin lost or broke at least three lightsabers in the prequels. Obi-Wan lost two of his lightsabers and barely regained the third. The fact that Mando has the Darksaber is mostly because its other wielders kept losing it.

Satisfactory answers for how lost lightsabers get found are elusive. How did Maz Katana get the Skywalker lightsaber in The Force Awakens? Don’t ask! Why did Obi-Wan pick up Anakin’s lightsaber on Mustafar when Anakin was burning to a crisp? Because the Revenge of the Sith script had to match up with A New Hope. The answer as to why someone has a lost lightsaber is almost always connected to the fact that it’s cool to see an old lightsaber.

This brings us to the other explanation for Luke having Yoda’s little saber in Boba Fett: Yoda built a second lightsaber after his duel with Palpatine and kept it hidden on Dagobah. Then, after Yoda gave up the Force ghost, Luke would have gone through his stuff and found it.

Does canon back up that theory? Oddly, yes. A 2016 book called Star Wars: The Complete Locations claimed Yoda had his lightsaber stored in his hut on Dagobah. Meanwhile, a 2017 Darth Vader comic depicted Palpatine publicly burning Yoda’s lightsaber publicly as a propaganda stunt. Both comic book writer Charles Soule and Lucasfilm rep Matt Martin have pointed out there’s no canon error, and fans can easily imagine Yoda having built a second lightsaber.

That’s about it. Luke is probably offering Grogu Yoda’s second lightsaber. And if that’s the case, there’s a good chance that the Jedi Master barely even used it.

The season finale of The Book of Boba Fett hits Disney+ on February 9, 2022.