“These things were really, really heavy.” 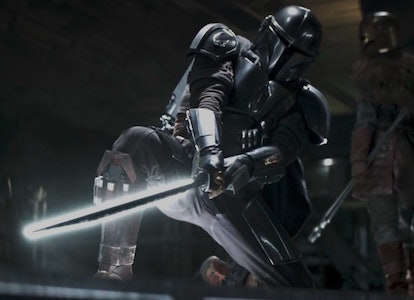 How heavy is a lightsaber? Because the blade of the lightsaber is some kind of energy beam, fans have long assumed that the actual handle was nearly weightless. However, the latest episode of The Book of Boba Fett suggests that some lightsabers, specifically the Darksaber, are actually more like boulders than feathers. And while this might seem like a change to the Darksaber, it’s actually a restoration of George Lucas’ ideas.

How Boba Fett changed the Darksaber

These days we associate the Darksaber with The Mandalorian, and now The Book of Boba Fett. However, this weapon first appeared way back in The Clone Wars episode “The Mandalore Plot.” It introduced fans to the weapon and showed us how it was forged in the days of the Old Republic, waaay before The Clone Wars. Since then a variety of people have wielded the Darksaber, from Bo-Katan to Sabine Wren and even Darth Maul.

But despite debate about who was worthy to own the saber, none of those people seemed to have a tricky time actually holding it. Kanan Jarrus had to teach Sabine how to use a lightsaber in Rebels, but the implied heaviness of the weapon wasn’t clear then. In a sense, depicting the Darksaber as heavy scans as a retcon within The Book of Boba Fett. But it’s really not.

In old interviews, including an official behind-the-scenes video called “The Birth of the Lightsaber,” George Lucas makes it clear he conceived of lightsabers as being unwieldy and “heavy” for inexperienced users. That’s why Han fumbles with Luke’s lightsaber in The Empire Strikes Back, and why in the classic films Luke and Vader usually have two hands on the hilt of their sabers.

“George was adamant that these things were really, really heavy,” Mark Hamill said in the same video. “That we couldn’t take a hand off [the hilt]. We always had to have two. It was like Excalibur, 40 to 50 pounds of weight.”

Lucas doubled down too, saying “They’re very powerful and have a lot of energy in them... so you worked with them as if they were heavy.”

Lucas has admitted that as the Star Wars films went on this concept was downplayed, and the fights “moved away from the two-handed form.” Still, his first conception of the lightsaber was that it felt heavy. “Originally, you needed two hands to hold onto this lightsaber,” Lucas said.

So how do we wrap our heads around this? Easy: Lucas is right and The Book of Boba Fett is right too. This episode isn’t saying all lightsabers are heavy, but that perhaps some of the older ones are. Chronologically, the Darksaber is probably the oldest lightsaber we’ve ever seen in Star Wars. So if we take Lucas’s comment about how the lightsabers were “originally” heavy, we can do a hop, skip, and jump, and apply that rule only to really old sabers.

The Darksaber does feel bigger and older than the other lightsabers we’ve seen. That fact makes this small retcon work well. And, since Lucas originally wanted lightsabers to be this way, the heavy Darksaber isn’t really a retcon at all. It’s a comeback.

The Book of Boba Fett airs on Wednesdays on Disney+.