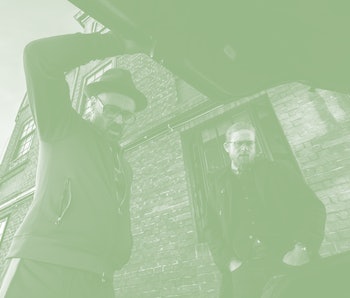 The Gentlemen from Guy Ritchie isn't a mind-bending narrative with an incomprehensible ending. You should understand it just fine so long as you catch the movie from the beginning, and don't wander in 20 minutes late because you just had to get Milk Duds at concessions. But to totally catch some of the more winking, insider jokes right at the end, you might need to know a thing or two about Guy Ritchie himself.

Spoilers for The Gentlemen ahead.

In The Gentlemen, an affluent American weed dealer in London named Mickey Pearson (Matthew McConaughey) is pursued by an alliance of competitors who want to buy him out. Matthew Berger (Jeremy Strong) and Dry Eye (Henry Golding) form an uneasy partnership to take down Mickey's lucrative empire. Meanwhile, a petty tabloid editor hires a private investigator, Fletcher (Hugh Grant), to dig up dirt on Pearson, which he turns into a screenplay and attempts to sell back to Pearson through his right-hand man, Raymond (Charlie Hunnam) for a fat sum.

Because half the movie is told through Fletcher's "screenplay," thereby implementing an unreliable narrative, it's sometimes difficult to figure out what's real and what's Fletcher's imagination. Sometimes Fletcher will pull up a recorded video with a semi-accurate transcript. Other times, he won't. You can still tell when Fletcher's story is real and when it's bullshit. But there are moments when the truth is surprising.

Still, things come to an explosive end when the movie reaches the end of Fletcher's screenplay. At this point, Fletcher's boss, the tabloid editor Big Dave, drops out of the whole thing when Coach (Colin Farrell) blackmails him by drugging him and filming him having sex with a pig, which traumatizes him.

Because Big Dave won't buy Fletcher's story, Fletcher attempts to sell it to Miramax, where Guy Ritchie himself cameos as a studio executive. A poster of Ritchie's cult hit The Man From U.N.C.L.E., which film critics love, hangs in the background. After the pitch meeting, Fletcher gets into a cab only to learn his driver is Raymond, which leaves Fletcher's fate looking grim.

Because The Gentlemen is a Guy Ritchie movie, there's a lot more we've left out from this quickened summary. There's a whole thing with Russian assassins, there's Pearson freezing Berger to get him to pay $270 million, there's Pearson getting kidnapped by the Russians right after that, and then Coach and his kids coming in for the unexpected save. But you'll get that just fine.

The Gentlemen is in theaters now.