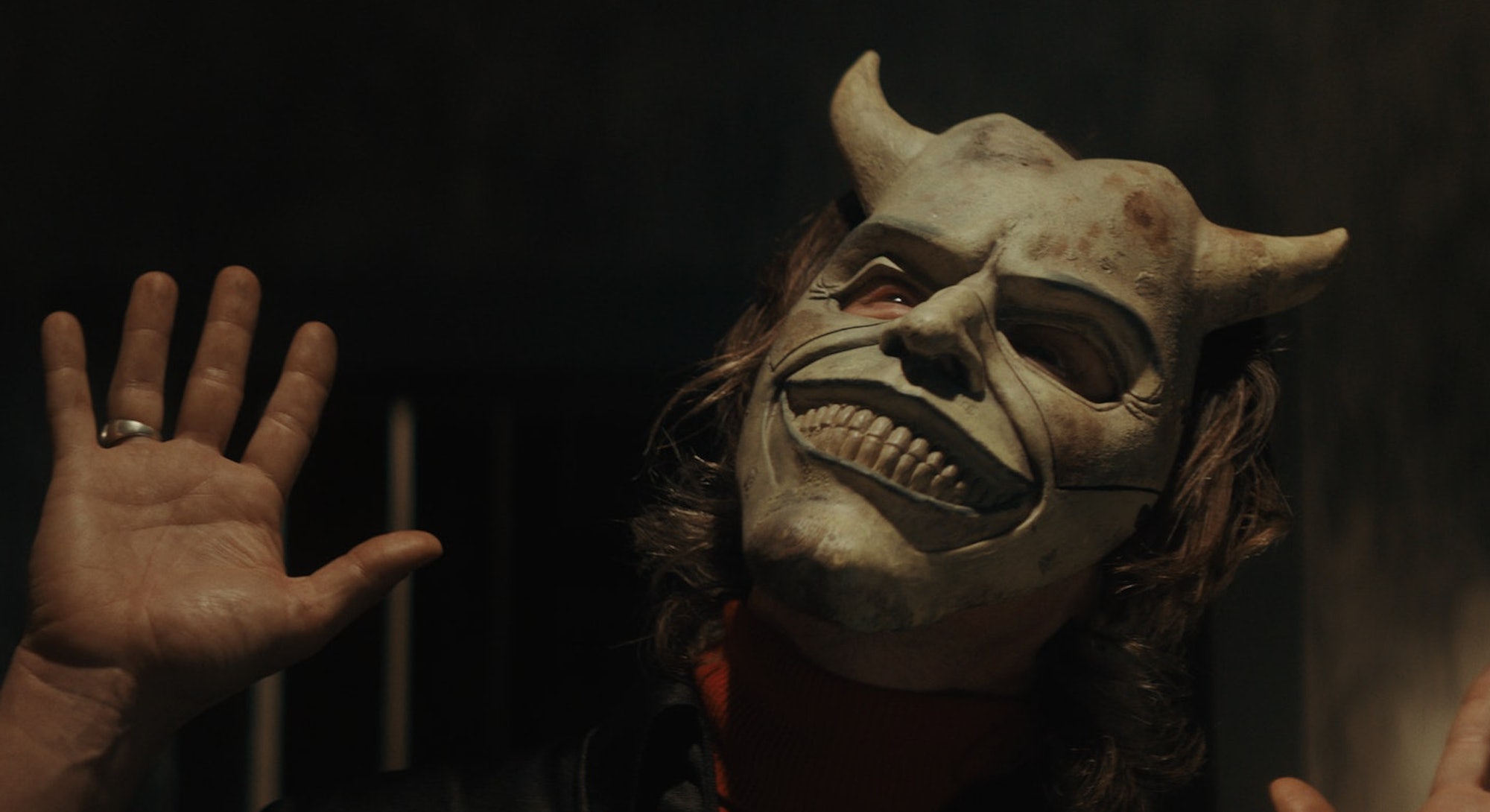 He rises into the frame like a carnival ghost, standing in the sun in shades of black, white, and rosy red.

Ethan Hawke, once and still the archetypical Hollywood leading man of tender romantic comedies and gritty cop movies alike is downright unrecognizable as a serial kidnapper with a flair for the dramatic in Scott Derrickson’s lissome The Black Phone. Far from his lovelorn vacationing writer in Richard Linklater’s Before trilogy, Hawke appears fleshed with the textures of a bonafide horror franchise mascot and the raw intensity of something very eldritch. The Black Phone is simply Hawke doing great stuff, albeit at the cost of everything else.

Co-written with Derrickson’s writing partner C. Robert Cargill and based on a story by Joe Hill, The Black Phone channels the ghosts of crime waves past. It’s 1978, and in a sleepy Colorado town there is a string of vanishing kids and a disturbing urban legend known as “The Grabber.” The only evidence are the stray black balloons that hang near every crime scene.

Finney (Mason Thames) is a bullied student with a wicked pitching arm. When he is kidnapped by “The Grabber” (Hawke) and left to perish in his dingy basement, Finney finds aid in the form of ghostly voices who call him through a disconnected telephone. He also gets help from younger sister Gwen (Madeleine McGraw), a budding psychic with razor-sharp wit and remarkable resilience in their difficult household.

The Black Phone marks Hawke’s first and instantly best cinematic villain role to date. It’s an outsized performance locked behind a lean and only kind of mean picture. This is also Derrickson’s return to horror since his exit from Marvel Studios in 2019. The Black Phone is further proof of Derrickson’s mastery over stories where the lines delineating the physical from the spiritual are foggy at best and disparate realms become reachable. Derrickson not only has a knack for such stories but for finding some semblance of human truths within them.

It’s a motif Derrickson has explored to varying degrees, from 2005’s The Exorcism of Emily Rose to 2012’s Sinister to even his 2016 superhero epic Doctor Strange. The Black Phone marks the maturation of Derrickson’s sensibilities, though there’s buoyancy in the already-gripping source material. The movie’s magical realism — an aspect where the King family DNA is most palpable — feels like catnip for Derrickson, though it also demands a certain kind of suspension of disbelief that, for some, can feel like a high cost of entry.

The titular black phone, a spectral Nintendo Power Hotline for the protagonist, is a novel framing device bugged by uneven scares and inconsistent tones. It’s scary until it's not, unexplainable until it's explained, surreal until it's just real. It’s never certain how the audience is meant to feel except pity for the lost souls calling in. When it’s all over, you may be swept up in the emotional highs, or caught in the quagmire of how everything was supposed to work. (My advice: Choose the former. It’s worth it.)

What else the movie offers besides an otherworldly Ethan Hawke isn’t to be underestimated, from its surprising subterranean depths of human evil to a gracefully agnostic exploration of spiritualism. (It also features one of the most honest and uncomfortable depictions of child abuse in a modern film. Kudos to child actress McGraw for going into such a harrowing headspace.)

But Hawke is so distracting and so enthralling it’s hard for everything else not to drown in his orbit. “The Grabber” is an all-time performance for the already-heavyweight actor, whose angular, handsome face has long screamed “villain” but who always pushed back against it for fear of being typecast. As a nameless terror who roams in a black van to snatch kids, Hawke appears like an unholy cross between London After Midnight’s Lon Chaney and “Wacko Jacko”-era Michael Jackson. Such ingredients seem to call for equal parts monstrosity and panache, and Hawke delivers it all in spades.

The Grabber might feel at home among Batman’s rogues' gallery, but Hawke elevates his villain above its cosplay-ready iconography of bone-white devil masks. The actor uncannily communicates pure and plain evil through aqua gray eyes and a breathy, gravelly voice that changes pitch on a dime. His presence here is the complete opposite of his turgid, loquacious cult leader in Marvel’s Moon Knight.

There are scarier movies with scarier villains, sturdier logic, and arguably even better filmmaking. But the specific alchemy that makes up The Black Phone means you’d be hard-pressed to find anything else as effective. Frightening enough to generate tension but not enough to anchor a midnight screening, The Black Phone’s saving grace is a nightmarish lead who impressively morphs into something visceral and infinitely menacing. Like its unlucky protagonist, The Black Phone has a way of locking you in with not much to offer, but when you come out the other side, you’ll have looked into the eyes of evil — and lived.

The Black Phone opens in theaters on June 24.