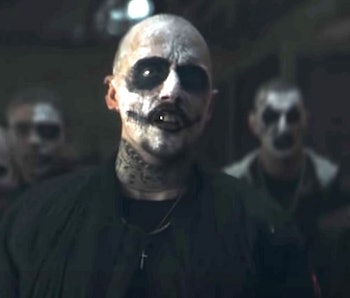 The latest trailer for The Batman brought back a slew of beloved characters. Catwoman, The Riddler, The Penguin, Jim Gordon, and of course Bruce Wayne himself all made appearances. Three villains are already a formidable threat for Batman during his second year of crime-fighting, but careful analysis of the trailer exposes two more possible adversaries may be hiding right under our noses.

Redditor Poundofcure first highlighted one of the most confusing aspects of the trailer: the gang of young men in ghoulish makeup, including one whose makeup only covers half his face. According to the theory, this is a gang of minions to either False Face or the Penguin. The latter is most probable, as False Face hasn't even been rumored to appear in The Batman.

The person with the half-face makeup is theorized to be either a prospect or initiate into the group, and the events shown in the trailer merely an initiation ritual. It seems pretty par for the course for a Batman movie, but this is where things get interesting.

The young man wears a red hood. If you know your Batman lore, you know that's a big clue this person could be Batman's future ward, Robin. If this is true, it could be our first glimpse of the dynamic duo, operating on opposing sides of the law. As much as the "circus orphan" origin story would be missed, "former gang prospect" would suit The Batman's neo-noir tone far better.

The theory also touches on one of the few original characters in this new movie. Commissioner Pete Savage, played by Alex Ferns, gives a speech in the trailer but we don't know much else about him. However, he apparently shares his last name with a character created for an episode of the '60s Batman series, a supervillain called Egghead, played by horror-movie icon Vincent Price.

Aside from the goofy implications, there's actually some pretty interesting backstory in that episode. The three powerful families said to have founded Gotham were the Waynes, the Tylers, and the Savages. This means that Commissioner Pete Savage isn't just a Police Commissioner, but a hugely influential Gotham figure in his own right.

Assuming his tenure is short-lived so Jim Gordon can step in, it's safe to assume Mr. Savage may not be the most law-abiding Commissioner. Perhaps his wealth and power goes to his head. Considering the theme of corruption evident throughout the trailer, it looks like he'll pay for his crimes.

The possibility of more villains and Pete Savage bring to mind an old, unfounded rumor from YouTuber Grace Randolph claiming there will be six villains in The Batman. This is probably not true, but we do already know of four so far — Catwoman, Riddler, Penguin, and Carmine Falcone. It's certainly possible, if not too likely, that two more baddies could get in the mix. After all, it's understandable Batman would have quite the mess to clean up at the start of his career.