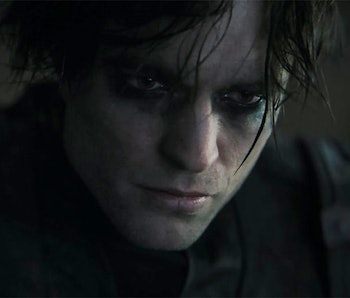 One of the highlights of DC FanDome was the first trailer for The Batman, and fans have been theorizing about the plot and characters ever since. Director Matt Reeves attended the virtual 24-hour event on Saturday, August 22 to discuss his highly-anticipated take on the Dark Knight. The film is set in Year Two of Batman’s journey, and the trailer offered glimpses of Catwoman, Commissioner Jim Gordon, and the Penguin. The trailer also showcased a twisted new take on the Riddler. With that in mind comes a theory that may explain the motives driving this new iteration of the classic villain.

Reddit user Mikhail10 suggests the “reason why Riddler starts killing is due to Batman's inaction/unwillingness to kill.” The theorist deduces that Batman turned a blind eye (a phrase that appears in one of the Riddler’s notes) to a crime that shaped Edward Nygma’s personal life. Perhaps another criminal hurt Riddler or someone close to him, inspiring him to dole out vengeance.

That alone could have transformed him into this twisted version of the Riddler. The trailer implies he is only after certain people; one victim's face is covered in duct tape with the words “no more lies” written on it. Fans speculated this mystery person was Gotham's mayor, which is why a press conference was held later on.

A commenter on the post suggests Riddler might be a “dark reflection of Bruce Wayne,” both victims of Gotham’s corruption. The commenter adds that, while Bruce still grew up loved and taken care of, the Riddler had a more troubled and abusive childhood.

Perhaps the Riddler is leaving these clues for Batman to uncover a conspiracy that involves the city’s corrupt justice system and the people who benefit from it. Riddler could see himself and Batman as two sides of the same coin, hance leaving notes for the Caped Crusader at every crime scene. The Riddler may be leading Batman straight to the Court of Owls, a mysterious criminal organization rumored to appear in the film.

The Inverse Analysis — It's very possible Riddler is trying to prove a point to Batman by killing and then leaving behind a trail of clues. Perhaps he believes the Dark Knight is the only one who can catch those the justice system does not. Conversely, it's possible that the justice system itself is corrupt (which is highly likely) and Riddler wants Batman to do something about it.

It's also possible that Riddler is attempting to point out that Batman is also working with a corrupt police force and that they deserve to be taken down like all others. Perhaps The Batman is setting up the Riddler to be more of an anti-hero who believe he's doing no wrong. The idea that the two characters might be a reflection of each other is an interesting one and the Riddler's ways of handling things might influence Batman to change his own violent tactics (he beats someone unconscious in the trailer). Whatever the case, this more sinister take on the Riddler could prove to be the most interesting yet.