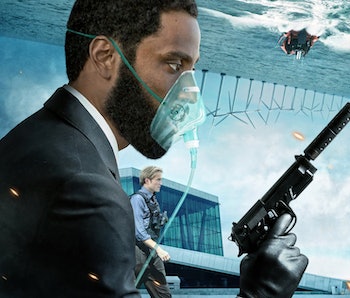 If you're anything like the good folks at Inverse, you've been checking your Twitter feed half the damn day checking for that new trailer for Christopher Nolan's next movie, Tenet. Well, Nolan's played us all for fools again, only this time it's nothing to do with parallel universes and alternate realities. The new Tenet trailer won't debut on YouTube or social media. Instead, it will stream at the top of the hour starting at 8 p.m. ET tonight in Fortnite Party Royale.

In case you haven't heard, Fortnite is looking to take over the world. Market dominance — to the tune of 350 million registered users — isn't enough for Epic Games' ubiquitous sandbox shooter. Fortnite is conspicuously evolving into a media platform in its own right, and the non-competitive Party Royale mode is at the heart of that. J.J. Abrams revealed an exclusive clip from The Rise of Skywalker in Fortnite ahead of the movie's premiere last December. Travis Scott's April concert in the game attracted more than 12 million live viewers. In other words, if you think this is annoying now, we're just getting started with all these non-gaming media events happening in Fortnite.

If you are a cool adult with good taste in games, you probably haven't spent much time in Fortnite for a while. If you don't feel like waiting for it to inevitably crop up elsewhere online, here are the steps you need to take to be among the first to check out the Tenet trailer.

You'll need this to run Fortnite on your mobile phone or computer, either Mac or PC. Sorry, there's no way just to watch it on your browser. You need to actually have the game to watch the Tenet trailer, at least right at the stroke of 8 p.m. ET. The game is free, but in order to download the Epic Launcher, you'll need to connect an email or social media account.

You'll want to do this well before the Tenet trailer is set to debut, because it's a pretty beefy game file and there's a lot of demand on the Epic Store at the moment. (Can't imagine why, what with this and the free copies of Grand Theft Auto V.)

You'll need roughly 38.7 GB of free space on your hard drive to download the game on a computer or laptop. That amount will likely be a bit smaller on Android and iOS devices, but you'll still need a fair bit of space available before you begin the download.

3. Look for the big screens in Party Royale

Once you've installed the game, the trailer will appear on the big screens throughout the landscape of Party Royale mode, Fortnite's new competition-free space. Make sure you aren't logging in for a traditional match. Think of it as kind of like a drive-in movie, but with more dabbing and emotes.