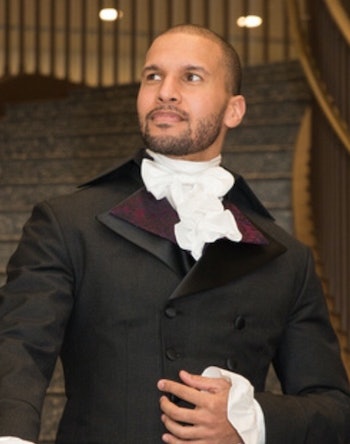 Sydney James Harcourt is the unsung hero of Hamilton.

While usually playing Philip Schuyler, James Reynolds, and the doctor, the roles he plays in the filmed production on Disney+, he also understudied Aaron Burr, George Washington, King George III and the Marquis de Lafayette, switching between roles constantly. He eventually took over the role of Aaron Burr after Leslie Odom Jr.'s departure, and was the first openly gay actor in the Hamilton cast.

"I was kind of holding my breath to see what I had done for the James Reynolds moment." Harcourt told Inverse about watching his filmed performance. "I did it so many different ways, and I wasn't sure what I did in the film. After I saw that, I kind of let go of all of it for the rest of the movie and just really enjoyed it with no self-consciousness, and I've felt that way since watching it now."

I was a pretty weird kid. In a good way, but still different. I wasn't raised with any preconceived notions of how I should behave, or what I should like, or how I should talk based on gender or race. I was encouraged to be an individual and I didn't get a bunch of judgment. I liked fantasy novels, Barbie dolls, knitting, baseball, and vocabulary. My mom teaches English, so I was such a public school disaster waiting to happen. I was just in my own world.

I’m reluctant to say this answer, but it's Mariah Carey. She's the first famous mixed person I'd ever seen and all of a sudden I felt, like, visible in the world. I didn't sing in front of people until I was about 15, but I had started singing secretly when I was around nine. I learned to sing by listening to her albums, repeating the songs, and I knew every breath and all of the lyrics.

I went to high school at Interlochen, a performing arts boarding school in Michigan. We had uniforms, so your only way to kind of express yourself was your shoes or your outer garments. It super cold there and during the winters there was lots of snow, so one of the first things I did when I got there was knit myself what I thought was an extremely inventive long scarf with a hat on the end of it. It was about six feet long, and I wore it every cold day. It wasn't about fashion, it was about economy and comfort. I wore that thing way too much.

We got terminals at our high school and we all got an email address. Literally all you could do was send emails to other terminals or be in a chatroom with other people who were on campus which I thought was incredible. At the almost exact same time, AOL came out and it didn't really draw me in, but I thought it was cool. I liked chatrooms, I could go and just chat with people I don't know and be curious. I do that on Instagram now.

I came out when I was 15, but there was a lack of willing partners. I was one of like four guys who were out and I don't think any of us were each other's types. I didn't really experience dating or courtship at 15, but I had some incredibly deep friendships. The love in friendships is underrated for how important it is in our lives and how it can sustain us through dark times and be there to celebrate with us in the best times.

The head of the dance department at Interlochen, Sharon Randolph. I went there as a voice major, but I took general dance to do my phys ed credit. After a semester of being in general dance, somebody in the ballet had hurt themselves before an upcoming performance so I stepped in and learned it.

It just changed everything for me to have the experience of performing in a ballet with a full orchestra, in a theater, with makeup and costumes. After that, I asked her if I could be a double major and also major in dance. So then for the next two and a half years, I took regimented ballet.

When I got to take on the role of Aaron Burr as the role and not the understudy. Suddenly, I had a role to work on where I didn't have to focus on anything else. No understudy requirements. I'm purely only in this one guy's head.

Most importantly, I got to invite people to come see what I do. That was such a huge break for me, I got to invite casting directors and industry people that could become familiarized with me. You become a familiar face rather than lost in the crowd. That is immense for an actor.

I had done three shows by the time I was 23. After my third show, I stopped doing auditions and I didn't do that again for eight years. It was starting to make me feel unhappy about performing. I was starting to associate unhappiness with singing and dancing, and I knew there was something so critically wrong with that.

Then I went to acting school. Doing that really kind of brought all of my talents into focus for me, and I learned how to use them all together. My failures early on in my career that made me question my place in the business ultimately led me to the realization that there’s more work to be done. You gotta know what you're doing.

My prediction for 2030 is it will be the most prolific prosperous time for art and creativity and as a society — an enlightenment on racial issues and wealth for our poorest class. We know now, with everything that's happened in the last 16 years, we've got to re-examine the system. We've got to change it so that it reflects for the majority.