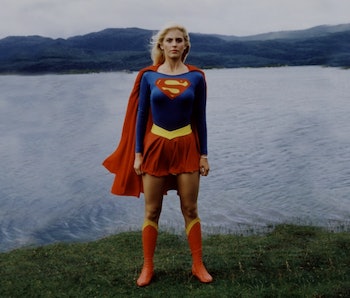 In the 1980s, the movie business was still lurching around as it tried to figure out how to make coherent superhero movies. In retrospect, this struggle is fascinating for two reasons. First, the failures of ‘80s and ‘90s superhero flicks feel more significant because there were far fewer films in the genre, making each misstep seem immense. And second, when old superhero movies went awry, the result was never bland. Failures were spectacularly bizarre in their singularity.

In this way, 1984’s Supergirl is the most interesting superhero movie of all time. Not a great film, and possibly not even a passable one, it’s still essential viewing for anyone interested in pop sci-fi and the history of superheroes in cinema.

It would be easy to say that Supergirl is a so-bad-it’s-good movie, one best watched with friends and alcohol. Superficially, that’s not a terrible way to approach it. Everyone meant well, but the result was still less than sane. It’s tempting to say Supergirl was a hilarious trainwreck, but that’s not quite right.

For starters, the plot is more absurd than most movies of its ilk. Kara/Supergirl (Helen Slater) has to leave Argo City (which exists in another dimension, kind of) and come to Earth, where she goes undercover at a boarding school and fights a witch played by Faye Dunnaway. Mia Farrow plays Kara’s mom Alura, and Peter O’Toole plays her kooky Obi-Wan Kenobi-esque mentor, Zaltar.

Those stars are barely in the movie, because most of the action involves Supergirl on Earth. Conveniently, everyone who matters to the plot happens to all live in the same tiny town. Imagine if the first Transformers movies took place in a college town where the Autobots had to fight a witch, and you’re close to the set-up here.

The pacing is strange, Supergirl’s powers are inconsistent, and the genre ranges from dark-fantasy horror to bad ‘70s Doctor Who, sometimes within the same scene. But there are also moments of amazing beauty and, if you look closely, a good movie is hidden in what we got.

Supergirl was directed by Jeannot Szwarc, the same person responsible for Christopher Reeve’s 1980 time-travel romance, Somewhere In Time. Is the bizarre unevenness of Supergirl entirely Szwarc’s fault? Perhaps not. There’s even some indication that Jeannot Szwarc’s Supergirl was the Justice League of its time. Two years after Supergirl underperformed at the box office and was lambasted by critics, Szwarc spoke to Starlog magazine:

“A week before we started shooting, Warner Bros. insisted on changes right and left and they changed the concept completely ... You can’t change the concept that late in the game ... the story we had was much more global and more about Selena (Faye Dunnaway.) It wasn’t all just [a] small town.”

Was Szwarc like the Zach Snyder of 1984? Maybe a bit. Christopher Reeve was originally supposed to appear as Superman, and one plot point would have had Supergirl rescue him. Don’t starting demanding the Szwarc Cut; most of the changes seemed to have happened in pre-production. And yet, because this film does take place in the Reeve-Superman universe (Mark McClure’s Jimmy Olsen appears), it’s fun to wonder what would have happened had this movie been even a little better. Could there have been a Supergirl 2 that moved ‘80s DC cinema in a different direction?

For now, you should watch Supergirl because some scenes actually look amazing. There’s something about flying scenes from the ‘80s that just look more convincing and compelling than similar scenes in contemporary superhero movies. You can’t argue with how badass Henry Cavill looks as Superman, but the way Helen Slater looks when she’s flying around as Supergirl is infinitely more interesting.

When Superman flies today, you’re always aware you’re watching a special effect. When Helen Slater flies, there’s a different kind of alchemy. It doesn’t look real, but it looks more organic. When the Jerry Goldsmith score swells as Supergirl soars over Metropolis, you can imagine comic book fans losing their minds in the movie theater.

Helen Slater went on to guest star on Smallville, and then appear as Supergirl’s foster mother in the Melissa Benoist-led CW Supergirl show. Could these Supergirl projects have happened without Slater starring in the role first? Maybe, but it feels unlikely.

Despite its cheesiness, convoluted plot, and utterly non-sensical tone, Supergirl still succeeds in one specific way: Its title character feels like a real hero.