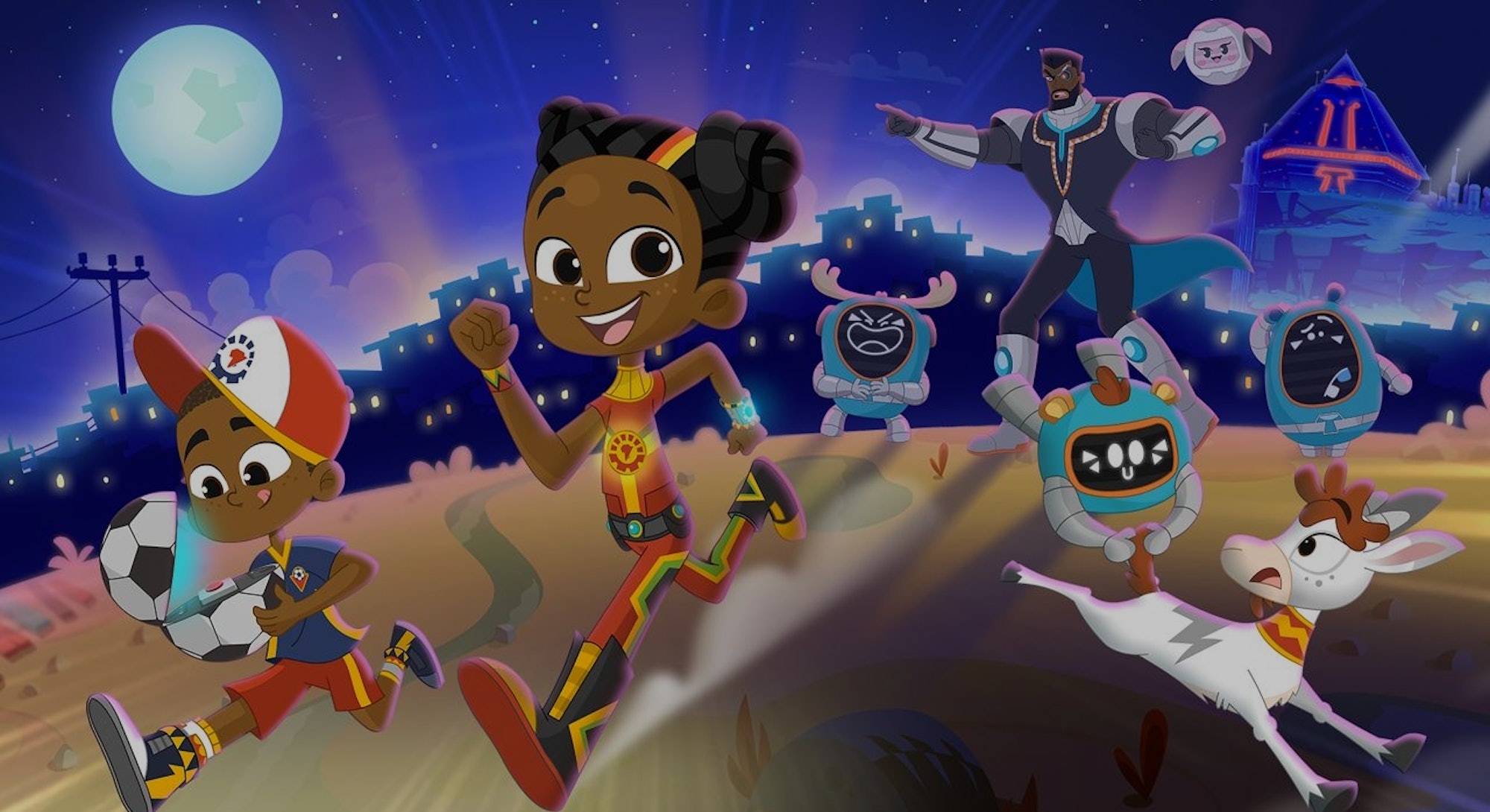 “I never thought I would see an African protagonist in an animation.”

Ruth Wanjiru is rewatching yet another episode of the YouTube original Super Sema, an animated series with the production value of an old Scooby-Doo episode. But for a 13-year-old girl from Nairobi, Kenya, seeing this young female superhero is a life-changing experience.

She’s not alone. Africa’s first female superhero, Super Sema, is inspiring a generation of girls in the same way characters like Superman, Wonder Woman, Spider-Man, and Black Panther have inspired countless comic book fans worldwide to imagine themselves as heroes.

Super Sema tells the story of a 10-year-old girl whose ingenuity, super-intelligence, and ability to “technovate” allow her to protect the African village of Deunio from artificially intelligent villain Tobor and his robot minions.

Created by BAFTA award-winner Claudia Lloyd and directed by Lynne Southerland (a producer of Mulan II, An Extremely Goofy Movie, and more), the series has star power behind it. Lupita Nyong’o is involved as an executive producer, also providing the voice of Mama Dunia, a tree that’s home to the spirit of Sema’s late mother.

“As a Kenyan, I couldn’t be prouder of Super Sema’s introduction to the world,” Nyong’o said this past March.

As the first African animated superhero show aimed at younger audiences, Super Sema has the chance to inspire a new generation with its positive outlook on science and technology — not to mention a catchy theme song. And if the show’s early success and fan response are any indication, Sema could be the beginning of a new wave of African animation.

Sema is not your stereotypical superhero. As opposed to having superpowers like flight or invisibility, she uses her creativity and intellect to solve problems. She can create radio transmitters, code her own apps, and turn waste into energy.

Ryan Kimani, a 12-year-old Super Sema fan, adds that Sema does it all while “imparting values like love, hard work, and resilience.”

He’s particularly inspired by Episode 16, in which Sema uses biomimicry to save an albatross from pollution.

“Being an environmentalist and perhaps future scientist, I share the episode with anyone who cares to listen,” he says. “I hope I can create such powerful inventions to conserve the environment someday.”

“What do you feel about Sema being female?” I ask 11-year-old Njeri Njoki, an aspiring crafts designer from Nairobi.

We are at her parents’ house, in our second attempt to make DIY slime by following the detailed instructions of Sema’s Lab, a live-action segment of the show.

“Most superhero movies and shows have a male character as the main cast,” Njoki says. “When I first learned that Super Sema was about to premiere, I thought the animation would follow the same script. It is amazing having a female protagonist as the superhero, more so a black character. She is smart, does innovative things, and is still accorded the level of respect she deserves.”

Njeri adds that she’s learned a “myriad of hacks” from these Sema’s Lab episodes, from crafts to yoga and dance choreography.

“Super Sema has brought schoolwork to my screen while incorporating fun."

Just as importantly, Super Sema gives African fans a chance to relate to the superheroes they see onscreen. The characters have African names like Babu (Sema’s grandfather), Chege (the shopkeeper), and Moyo (Sema’s pet goat). Some speak in Kenyan dialects. The series’ vivid visuals also reflect the culture of Kenya.

These small details reflect the broader goals of Kukua Education Limited, the start-up behind Super Sema.

There’s an acute shortage of female-led casts in mainstream superhero movies and shows in general. Within the highly patriarchal societies of many African communities, that disparity is even more stark Kukua Education Limited’s female-led team is working on a solution.

“I share Kukua’s goal to empower children through inspiring stories that feature characters in which the children see themselves reflected,”Nyong’o told Deadline. “I am delighted to be a part of this talented, female-led team of purposeful creators.”

In a June interview with Bloomberg Businessweek, Kukua’s CEO Vanessa Ford revealed just how big the company hopes to become.

“We want to be the Mickey Mouse of Africa,” she said, “but with a strong learning component.”

What’s next for Super Sema?

Super Sema Season 2 premieres this December, but that’s just the beginning. Kukua has identified a major opportunity in African entertainment.

“There needs to be such content more often,” Wanjiru says. “This way, I am no longer an outsider of what I am consuming on screen.”

Beyond Super Sema, African creators are gearing up to create more cartoons for an even wider audience. In 2019, Netflix acquired its first African animated series with Mama K’s Team 4. The show, which premieres in 2022, follows four scrappy teenage girls living in the neo-futuristic city of Lusaka, Zambia, as they try to save the world with the help of a retired secret agent.

In the meantime, Super Sema superfan Njeri Njoki has a much more modest request.

“Maybe create merchandise,” she suggests. “They can create comic books, video games, or beautiful costumes — and toys too. I want a Sema miniature toy. She’s my role model.”