“We mortals can take to the skies.” 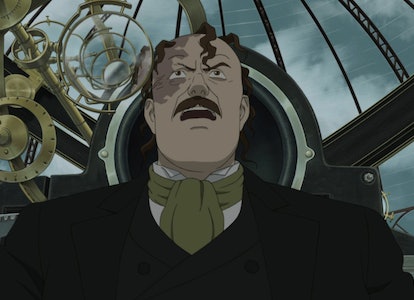 The steampunk genre offers a cool and unique aesthetic based on a pretty important moment in time for humanity, but a problem many steampunk stories end up falling to is that they glamorize the Victorian Era that inspired them. In the process, these movies ignore the imperialism and racism of the time to simply look at all the cool technology.

That's not the case with Steamboy.

Steamboy is Katsuhiro Otomo's second feature film, and the follow-up to his masterpiece, Akira. At first glance, the two movies couldn't be more different. Gone are the neon-lit streets of Neo Tokyo, the hyper-violence, the government mistrust, and the themes of rebellion and authoritarianism. Instead, we get muted earth colors that reflect the limited technology of the time, a brighter and more upbeat tone, and an optimism for the future aided by wonderful technology.

The film follows 19th-century boy inventor Ray Steam, who is entrusted with his grandfather's greatest invention, a "steamball" capable of generating great power. The steamball is the target of a sinister corporation that wants to use its power to make money and sell war machines — in the name of advancing science, of course.

There's a sense of accessibility to Steamboy that Akira lacks at times. This steampunk adventure is far more straightforward than the gargantuan tale of Tetsuo and Kaneda. (There's also the fact that this is an original script rather than an adaptation of a 2000-page-long manga.)

Steamboy is more akin to the kind of blockbuster we get in the West, rather than most anime films that make it stateside. The villains are clearly defined, the hero doesn't have any big flaws, the end goal is spelled out from the get-go, and the philosophical conundrum at the core of the film is simple enough to grasp, yet complex in its repercussions.

The result is a film that feels accessible for audiences who may not be familiar with anime beyond the works of Studio Ghibli. Steamboy is filled with blockbuster-style action, but it’s also thought-provoking in a way you only get in Japanese anime.

This dilemma at the center of the film is all about the role science and technology should have in society, which perfectly fits the steampunk genre's setting of the Industrial Revolution, yet is seldom explored in the genre. Is progress for the sake of progress enough? Or should we make sure science serves the betterment of humanity? Steamboy has a clear answer in mind that feels right at home with other anti-war, pro-nature anime films like Nausicaa of the Valley of the Wind and The Wind Rises.

The end credits make this clear by showcasing the technological wonders that came out of the late 19th century (tweaked a bit with some steampunk aesthetic) like the Eiffel Tower, the lightbulb, and eventually the airplane, only to follow these up with shots of the Hindenburg disaster and the trenches of World War I. In this regard, the film does share some similarities with Akira in how they portray the horrors of using technology and science to wage war. At one point Steamboy almost argues for a father to murder his own son because he's become a warmonger — take that, Disney!

It's hard not to expect Steamboy to be a visual masterpiece after Akira redefined what you could do with animation. Thankfully, the film absolutely delivers.

There’s a sense of scale nearly unprecedented in the genre. When the film reveals its version of the giant tarantula from Wild Wild West, you actually feel the weight and danger of it as the camera constantly zooms in on the tiny and fragile humans being crushed and blown to pieces by all the war-machinery on display.

Steamboy remains one of the most expensive anime movies ever made, and every cent is fully on display, with over 180,000 drawings and 440 computer-generated cuts making for a near-perfect blend of traditional and computer animation that no modern CGI movie can replicate. At the same time, stunningly creative camerawork that pans, spins, and rotates along with the action would be impossible to do in fully 2D animation.

While cyberpunk is a genre that originated with a lot of ethos but devolved into just a pretty aesthetic, steampunk never really had much ethos to begin with (in film, at least). Katsuhiro Otomo's Steampunk breaks the mold by actually providing some poignant commentary on its setting and genre, while still making for a high-thrill blockbuster-scale steam-powered ride.

Steamboy is streaming on Amazon Prime until April 1.

More like this
Entertainment
6.27.2022 1:00 PM
The oral history of Face/Off, Nicolas Cage’s inexplicable sci-fi masterpiece
By Ralph Jones
Culture
6.17.2022 11:31 AM
45 years ago, the worst Exorcist sequel almost killed the franchise forever
By Jon O'Brien
Entertainment
6.21.2022 10:30 AM
You need to watch the most brutal dystopian movie on HBO Max before it leaves next week
By David Grossman
Related Tags
Share: