“It would be nice to have Old Man Rico back.” 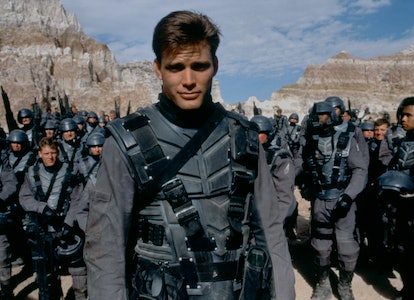 The mix in question is the concept of a Starship Troopers TV series. It's been 25 years since the cult science-fiction hit first premiered. The movie, which was adapted from Robert A. Heinlein's 1959 novel not only supplied Van Dien with his breakthrough role of Johnny Rico, it quenched our thirst for seeing hordes of giant bugs get absolutely slaughtered by this team of young heroes. But right beneath all the campy violence was an undercurrent of political and social commentary that, as the actor rightly points out, "would fit so well in today's climate."

Before the pandemic sidelined the entertainment industry, there were development talks at Sony Television to get this project going. And while the actor is a bit apprehensive to fully confirm any directors' names as being attached, it's obvious Rodriguez is high up on his list.

"Robert and I, when we were working on Alita: Battle Angel together, he was talking to me the whole time about Starship Troopers. I know he loves the movie," Van Dien tells Inverse.

Other directors from Quentin Tarantino to Edgar Wright Jr. to James Wan apparently love the movie as well, having shared a two-hour-long geek-out sesh with Van Dien at a Scream Awards ceremony some years ago.

"I think that all those directors, it would be fun, to have them come in and do an episode or two or three, or an arc, or something like that," Van Dien says, pitching something akin to what Disney+ has done with The Mandalorian. "I think it would be fun if we had that kind of thing where it's real filmmakers making the thing. That would be my goal."

But wait a minute, would the series, in Van Dien's mind, retcon the whole franchise and just act as a direct sequel to the Paul Verhoeven-directed original?

Well, what are you waiting for, Sony? Let's kill some bugs!