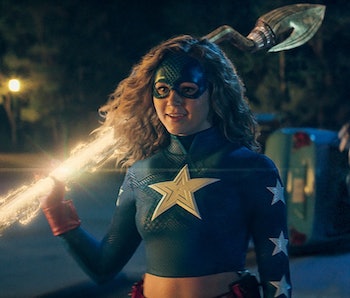 Nearly two years after DC Universe ordered Stargirl to series, the first season premiered to high praise in May and left quite an impression on fans with its incredibly hopeful nature and an abundance of DC Easter eggs. The superhero series follows the story of Courtney Whitmore, a teenager who takes up the mantle of Stargirl following the discovery of the Cosmic Staff. Adamant about being Starman’s daughter, Stargirl recruits her classmates — Yolanda as Wildcat, Beth as Dr. Mid-Nite, and Rick as Hourman — to thwart the nefarious plans of the Injustice Society of America (aka the ISA).‌

Stargirl had the unique experience of airing concurrently on DC Universe and The CW. However, its Season 2 renewal will be changing things up for the series moving forward. With Season 1 leaving off on a major cliffhanger that left the state of the ISA and their goals up in the air, here’s everything we know about Season 2, including release date, plot, cast, and more.

Spoilers ahead for Season 1 of Stargirl.

Where did Stargirl Season 1 leave off?

Stargirl Season 1 ended with the new Justice Society of America stopping the ISA from controlling the minds of millions. A few of the villains died in the process, including Icicle, Brainwave, and Dragon King (who was stabbed in the back by his daughter Cindy). While the JSA had a big win, the season finale did tease a few villains in store for Season 2 and confirmed that Starman was somehow still alive.

Will Season 2 still air on DC Universe and The CW?

Nope. Season 2 will air exclusively on The CW. That’s not surprising considering that DC Universe’s slate of original shows will be moving to HBO Max. (Harley Quinn and Doom Patrol are already streaming there.)

Ahead of Season 1, showrunner Geoff Johns praised the special effects of the show and likened them to theatrical superhero films like Wonder Woman. Will that change with the move to CW? Here’s what Johns told TVLine:

“Startup costs are always the most expensive, obviously — the building and testing, and a lot of that we’ve already done. We have some new things to get into, which is exciting, but we wouldn’t do Season 2 if we didn’t think we could make it as good as Season 1, but different. We’re going to explore [a] different story, different thematics, different avenues for the characters. We’re all working incredibly hard on this because we’re so proud of Season 1, and we want Season 2 to be even better. That’s our goal, nothing less.”

When is the Stargirl Season 2 release date?

Season 2 does not yet have a scheduled release date. However, production on the season has already begun, so we can expect a concrete premiere date to be confirmed by The CW sooner rather than later. That said, the network's schedule is pretty booked up for the winter's midseason, with Stargirl's superhero comrades The Flash and Batwoman set to return at midseason. According to TVLine, Stargirl Season 2 won't premiere until the spring/summer of 2021.

What is the plot for Stargirl Season 2?

Great question. It’s unclear what the plot will be just yet, but fans should expect Season 2 to pick up the loose plot threads from Season 1: Solomon Grundy escaping the ISA, Yolanda killing Brainwave, and Starman’s unexpected return. There's also the mysterious purple/pink pen that she found at the JSA's headquarters that is still sitting on Courtney's desk, waiting to be used.

During Stargirl’s DC FanDome panel on September 13, Johns confirmed Solomon Grundy will be back. He also teased the importance of Eclipso, the villain Cindy discovered at the end of Season 1.

Oh, and fans should also expect more of Hooty, Dr. Mid-Nite’s pet owl. Season 2 is shaping up to be a hoot!

Who is in the cast of Season 2?

All the Season 1 cast members whose characters didn’t die will be back for Season 2.

Hunter Sansone will presumably return as Cameron as well. However, considering how little his role was in Season 1, it’s hard to say what role he’ll play. That said, Icicle’s death may bring him more to the forefront in Season 2. And, of course, Joel McHale will be back as Starman. In addition to the main cast, Stargirl has cast The Expanse's Nick Tarabay in a series regular role as the villain Eclipso, Jonathan Cake as the recurring character The Shade, and Ysa Penarejo in a mystery role.

Is there a Season 2 trailer?

Not yet. It’s possible the first trailer will drop a few months ahead of the Season 2 premiere, so at some point in 2021. Watch this space.

Where can I watch Stargirl Season 1 right now?

The first season is currently available to stream on DC Universe and all 13 episodes are also available to watch on The CW’s website for free.