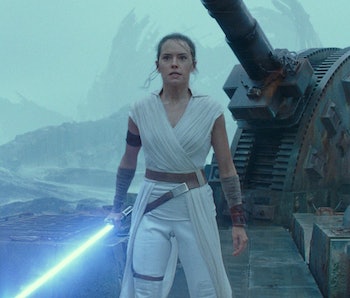 Rey's ancestry was a major focus of The Rise of Skywalker, and the sequel trilogy as a whole. Thanks to the movie and its official novelization, we learned Rey is the child of an unnamed Palpatine clone and an unnamed woman played by Killing Eve's Jodie Comer. But we still don't know much of anything about Rey's matrilineal roots. If cloning in Star Wars works anything like it does in our world, it would still require an egg, which means there would have to be another participant in the process. Who could possibly have taken on that important task? The answer may lie in the prequel trilogy.

Sly Moore is a character seen in fleeting glimpses during Attack of the Clones and Revenge of the Sith. She's usually shown at Palpatine's side, with her attention-grabbing Umbaran cloak and bald head. Not much is known about her, but she does have an entry in the Star Wars Character Encyclopedia, where she's said to be Palpatine's staff aide.

Sly's one of the few people who knows Sheev's true identity as Darth Sidious, and her role is apparently to "control who gets access to the Chancellor." Her role sounds less like a personal assistant and more like a Lady Macbeth character, assisting Palpatine in his grand plans.

Another encyclopedia entry alludes to Umbarans' power to influence people and possibly control minds, making Sly an excellent ally for Palpatine in his role as Chancellor, manipulating those around him to bend to his will. She's also Force-sensitive, which could assist Palpatine on his mission to create a clone of himself with Force sensitivity. Plus, someone as manipulative as Palpatine is definitely his type.

While there may not be any of Sly's genetic material in Rey, it's very possible she is in fact her grandmother. Yes, Palpatine managed the mass production of thousands of chip-implanted clones, but for a secret mission like the extension of his own life, he would have to turn to those closest to him. Enter Ms. Moore, whose use of mind control could keep up with those concerned about his plans.

Of course, the cloning process is mysterious, it might not even require a "host" as it were. That still doesn't rule out a secret marriage between Sly and Sheev. They seemed quite cozy at the Mon Calamari Ballet, even if they were third-wheeled by Anakin moments later. The Jedi may be discouraged to form romantic attachments, but not the Sith. Just because Emperor Palpatine is a genocidal supervillain, it doesn't mean he should be denied love.

Why don't we know anything about Rey's family history aside from the Palpatine stuff? It could be just a consequence of the sheer amount of story packed into Rise of Skywalker, but it also could be deliberate: literally all the family Rey knows is just different iterations of Palpatine. She's "just Rey," she can't take her mother's name, or her grandmother's.

The name she does take, Skywalker, drives home the fact chosen family can be just as important as biological family, whether that be who birthed you or who created you through a process used to mass-produce armies. Still, if Rey's going to have a grandmother, she could do worse than a Force-sensitive, mind-controlling Umbaran like Sly Moore.