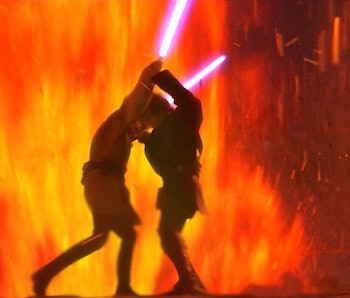 Anakin Skywalker dodging lava is not generally considered a high point of Star Wars or sci-fi cinema. But if Revenge of the Sith’s lava-surfing, lightsaber fight on Mustafar not happened in 2005, the VFX landscape of the 21st century would be very different today.

Here’s how Revenge of the Sith raised the bar and allowed an array of daring, VFX-laden sci-fi epics to follow in its bold path.

In conversation with Janet Lewin, the general manager of ILM and a senior vice president at Lucasfilm, Inverse learned that the 21st-century history of digital VFX innovations owes a lot to the staggering achievements — and limitations — of the 2005 film Star Wars Episode III: Revenge of the Sith. Speaking to her for the new Disney+ documentary, Light & Magic, Lewin made it clear that Sith was the first film of its kind, at least when it comes to digital “scale.”

“The first Star Wars film had something like 400 VFX shots,” Lewin explains. “And those were all done, obviously, with miniatures and motion control. But then George [Lucas] really pushed the envelope with the prequels. With Revenge of the Sith, we were executing something like 2,200 shots. This was at a time when most films were doing far, far fewer shots.”

For some armchair critics, Revenge of the Sith’s Mustafar sequence, and the lava platforms in specific, represent a moment where Lucas went too far with digital effects. But what many people may not know is that everything about the climax of Sith was a true combination of practical and digital effects. In Paul Duncan’s massive book, The Star Wars Archives: 1999-2005, it’s made clear a “miniature” set for Mustafar was constructed conventionally, not just in a computer. In fact, as that book points out, the model was “18 feet wide, 33 feet long, and seven feet high.”

And it’s in this complex sequence where Lewin points out the audience can see a microcosm of how Lucasfilm and ILM innovation works and pushes forward.

“I think one of the harder challenges was Mustafar, with the lava,” Lewin says. “We did a combination of practical effects and computer graphics to realize that, which is kind of what Star Wars is all about.”

Lewin asserts that this blending of all-green-screen environments with practical effects (in this case, miniatures) was a part of the “evolution” of returning to “legacy” VFX.

“We’re always trying to look for that blend between different mediums, but to still get that handcrafted, realistic result,” Lewin explains. “If you have an over-reliance on computer graphics, and that's where you get some of those unrealistic camera moves. We learned a lot on Revenge of the Sith, and now you see a kind of a full circle approach where visual effects are actually right at the beginning of the process.”

Lewin is referring, of course, to StageCraft, the AR Wall technology made famous by The Mandalorian, which allows virtual environments to be filmed in “real-time,” along with the performers. This kind of tech didn’t exist while Revenge of the Sith was being made, but Lewin suggests that, without Sith pushing the digital frontier, we may never have gotten to this point.

“There’s been sort of a resurgence and a rebirth of thinking about how to execute visual effects work more and how to make that work in concert with the other filmmakers,” Lewin says. “But that process has to start somewhere.”

In other words: don’t underestimate the power of Anakin surfing on lava. Without that bold moment in the Star Wars prequels, we may never have gotten to the more integrated approach that VFX has today. Revenge of the Sith may not have effectively struck a balance between digital visual effects and practical effects, but it started a process that led to today’s filmmaking — arguably, the renaissance of some of the most seamless and best VFX of all time.

Light & Magic streams on Disney+ along with Revenge of the Sith.