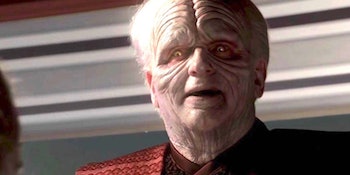 Expecting to see Palpatine in any Star Wars project isn’t out of the question. Despite his death in Return of the Jedi, Palpatine somehow returned in Dark Empire — a beloved 1991 comic book series — and he made a less-than-stellar comeback in some 2019 film called The Rise of Skywalker. Most recently, he managed to crash the series finale of Obi-Wan Kenobi, appearing as a nagging hologram reminding Darth Vader to keep his priorities straight.

You just can’t keep a bad Sith down. In fact, if he doesn’t appear in the upcoming series Star Wars: Andor, it will be a tragedy. Here’s why Palpatine should return again.

Because Andor will begin about five years before A New Hope and Rogue One, the Empire is at its most efficient and frightening. The Rebel Alliance, at this point, isn’t as defined as we’re used to in the original trilogy. And that’s partially because the Empire is just starting to get as tyrannical as they’re ever going to be.

If you’ve got a show that hinges on how the Rebel Alliance was formed, and specifically why people like Cassian Andor (Diego Luna) were ready to fight back, then why wouldn’t you have the leader of the Empire in that story? Not having Palpatine in Andor would declaw the Empire, and render a hardcore Rebellion versus Empire story a little one-sided. Palpatine doesn’t need to bust out a lightsaber or shoot lightning from his fingers but, to actually make the Empire scary, an occasional glimpse of Darth Sidious in Andor makes sense.

Although Andor isn’t called Star Wars: Andor, and Also Mon Mothma’s Here, all the advance information about the series — specifically the huge Vanity Fair preview — has made it clear that the story will also follow the political career of Mon Mothma (Genevieve O’Reilly). We know Mon Mothma leads a dual life representing her planet Chandrila in the Imperial Senate while also working as the de facto leader of the Rebel Alliance.

So if a huge chunk of Andor will follow Mon Mothma’s machinations in the Imperial Senate on Courscant, again, why wouldn’t Palpatine appear? The politics of the Star Wars galaxy post-Order 66 are actually pretty confusing. Despite the Empire taking over, Palpatine still retained the senate, creating a façade of democracy. But how did this work? Leia was a senator. What did she do? What did Mon Mothma do?

Andor will presumably answer these questions. And if a big chunk of the story is focused on the inner workings of the pre-A New Hope government, then Palpatine will need to be there. And so, if Andor plays out the way we think, we might be getting more of Palpatine than we’ve had since The Phantom Menace. And unlike some of his recent appearances, Sheev sliding into Andor will be more than welcome.