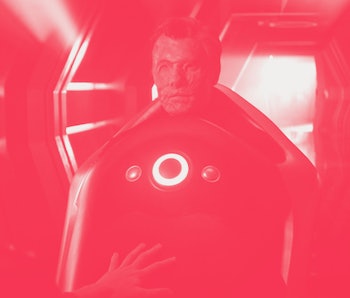 The series premiere of Star Trek: Strange New Worlds is still a long way off, but Lower Decks just threw a potentially huge curveball into the franchise canon that the pre-TOS spinoff is going to have to contend with at some point.

So what happened to Captain Pike's body after "The Menagerie?" Presumably, it was taken care of on Talos IV by the Talosians, but for how long? The latest episode of Lower Decks has a brief Captain Pike Easter egg that'll make you question how long Pike's life-support pod can last. If Starfleet is using the exact same tech in 2380 that they used to keep Pike alive back in 2265, then it seems like Pike could potentially live forever.

Here's what the Pike Easter egg means in the context of the episode, and why it could lead to a bonkers scenario of Captain Pike becoming quasi-immortal. Mild spoilers and speculation ahead.

In Lower Decks Season 1, Episode 7, "Much Ado About Boimler," we're introduced to a part of Starfleet called Division 14, which deals with Starfleet people who are victims of "space accidents." We see at least a couple people who have been zapped by "Delta Radiation," and are encased in the same kind of life-sustaining pod Pike had in the TOS episode "The Menagerie." The in-universe explanation for this was that the "delta rays" were so bad that Pike was almost totally cut off from his body, even though his mind was completely fine. Commodore Mendez tells Kirk that Pike is "kept alive mechanically, a battery-driven heart." In the same episode, when Kirk asks how long Pike will live, Bones replies "As long as any of us."

But what does that mean? In Lower Decks, we see other Starfleet Officers who seemingly had the exact same accident happen to them that happened to Pike, and, as such, they are in the same life-sustaining pods. Presumably, humans — even humans who have been hit with "delta radiation" — live a lot longer in the Star Trek future than humans live now. Bones himself visited the Enterprise-D in 2364 at the improbable age of 137. In the Star Trek 2009 reboot, Scotty knows "Admiral Archer" personally, which is a reference to Jonathan Archer from Enterprise, a character who would have been around 145 during the events of that movie.

Even without Pike's life-support pod, there's already ample evidence that any human from TOS could live well into the 24th century. If Pike is still alive during the events of Lower Decks he'd be around 170. (Though we don't know exactly, because Pike's birthday has never been established canonically. Mendez says he's "about your age" to Kirk in "The Menagerie," but that doesn't really seem right considering Pike's long career before Kirk.)

So, what does Lower Decks bring to the table here? Well, the life-support pod/chair we see in "Much Ado About Boimler" is pretty much exactly like the one Pike had in 2265, which is 115 years before this episode. This tells us one thing: This technology is built to last — it keeps people alive for a long time and does so without breaking. By the end of this episode, we also learn that Starfleet is committed to helping the people who are victims of these space accidents. This means we can infer that the chair keeps people alive for a long, long time.

In TOS, Pike is left on Talos IV where the Talosians promise to give him a telepathic life of illusion, in which he's not confined to his life support pod. It's like the ending of Black Mirror's San Junipero, only it's Captain Pike, and the fantasy world is created by complicated telepathy and not a brain upload. But, the key detail is that Pike's body, complete with that life-support pod is left on Talos IV. So, as long as that thing keeps working, then that means Pike's consciousness could be kept alive that whole time, too, right? Lower Decks also implies that the purpose of taking these victims to "the Farm" is to help them recover, which seems to mean that it's possible the effects of delta radiation could be undone in the 24th century. Granted, we don't see this happen, but it's feasible.

In issue #61 of the 1994 DC Star Trek comic book run, Pike returns to visit Spock much later in the timeline, sometime around the 2290s. In this series, Pike's telepathic powers have increased to the point where it seems like he has more use of body. None of this is canon, and there are some twists and turns in the story, but the point is, there is a precedent for bringing back a post-TOS Pike into canon. If the telepathic dream-world kept his mind alive, while this very reliable tech kept his body alive, could we see Pike in Season 2 of Star Trek: Picard?

It's a long shot, of course, but considering we're about to see Pike again during his heyday in Strange New Worlds, it might be interesting to start thinking about his future beyond a prolonged flashback.