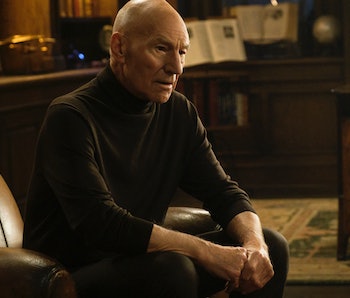 Retired Admiral Jean-Luc Picard dashes back to the small screen this week as the sophomore season of Star Trek: Picard boldly bolts toward the 21st century for a final trial to save the galaxy. And we’ve got all the mission parameters to unpack for you.

Two years after Picard first appeared on the Trek-centric streaming service, and following several pandemic-related delays, we’ll finally see Sir Patrick Stewart soaring among the stars once more in what’s expected to be a flashback season of cosmic surprises.

Fans will recall that at the conclusion of Season 1, Picard's consciousness was transplanted into a synthetic body by Dr. Altan Soong (son of Data’s creator, Dr. Noonian Soong) due to the starship captain’s terminal Irumodic Syndrome, thus providing a resurrection of sorts.

Let’s buckle up and warp into all the time-twisting wonders of Picard Season 2!

What is the Picard Season 2 release date?

Picard launches its second season on Thursday, March 3, exclusively on Paramount+ in the United States and Canada. Internationally, the series arrives on Amazon Prime Video one day later on Friday, March 4. Only the first episode will be available to stream on March 3.

When is the Picard Season 2 release time?

Paramount+ unveils new movies and TV shows at midnight Pacific, 3 a.m. Eastern. The first episode of Picard will likely premiere on the streaming platform at this time on March 3.

How many episodes are in Picard Season 2?

Season 2 will consist of ten episodes, released weekly on Thursdays.

What is the Picard Season 2 plot?

Jean-Luc Picard’s past once again haunts him in the forms of John de Lancie's Q and Annie Wersching's Borg Queen. In Season 2, he time travels back to Earth to the year 2024 in an attempt to unravel pivotal events that have devastating consequences for the galaxy.

“The time travel, which at some point becomes a big journey, a big jump in years, I really enjoyed," Stewart said in the February issue of SFX Magazine. "To be on the streets, the recognizable streets of Los Angeles, shooting Star Trek was a real boost for all of us. I did enjoy that. It's not just novelty that I'm looking for, it's a different kind of originality in the work that we do. The unexpected, the surprises."

Showrunners for Picard Season 2 are Akiva Goldsman (Lost in Space, A Beautiful Mind) and Terry Matalas, who was behind SyFy's 12 Monkeys TV series, so wind your wristwatch and brace for a fusion of bittersweet memories and temporal manipulation.

Who is in the Picard Season 2 cast?

In addition to Stewart, the central cast includes:

Is there a Picard Season 2 trailer?

Yes, Paramount+ delivered the dynamic final series trailer for Picard Season 2 on January 21. Check it out, and welcome to the road not taken!

Will there be a Picard Season 3?

Absolutely! The third voyage was officially greenlit back in 2020, with many scenes destined for Season 3 filmed concurrently with Season 2. Picard Season 3 is expected to air in early 2023.