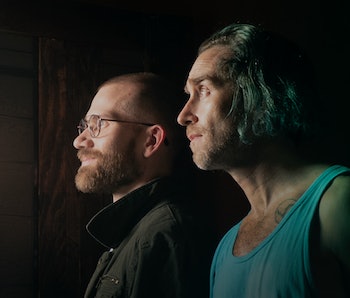 David Dunning and Justin Kruger would have a field day with Justin Benson and Aaron Moorhead’s new film, Something in the Dirt. Back in 1999, Dunning and Kruger discovered that low-performing blowhards tend to credit themselves with a higher capacity than they actually have. They declared this cognitive bias the Dunning-Kruger effect and, 23 years later, everyone’s either an amateur epidemiologist or political analyst. Their point has been proven, while society could use collective reeducation on Dunning and Kruger’s research. Watching Something in the Dirt should suffice.

Benson plays Levi. Moorhead plays John. They’re neighbors in a rundown Los Angeles apartment complex, Levi having just moved in as a stopover while he gets ready to leave the city entirely. It doesn’t take more than a few lines of dialogue for Something in the Dirt to establish chummy rapport between the two based on what they have in common: They’re losers weaned on The X-Files, Reddit, and TED Talks, a spicy pop culture farrago that’s convinced them both of their broad expertise in matters well beyond their ken.

They’re also opportunists with a powerful need for cash, so when the pair catches Levi’s giant crystal ashtray floating around of its own accord, they get it in their heads to film an encounter with the supernatural to make a quick buck. John’s reasoning is both dimwitted and oddly astute: Netflix probably would pay out the nose for a scrappy hand-held ghost hunting documentary.

Benson wrote Something in the Dirt while Moorhead shot it, and they co-direct, edit, and star. That’s how they’ve done things since banging out their first feature, Reprise, in 2012. Every director has their secret sauce. Benson’s is Moorhead; Moorhead’s is Benson. How else to explain their co-filmography, from 2014’s Spring to 2019’s Synchronic? Picturing one without the other is like picturing the 4th of July without fireworks. They’re inseparable, and their inseparability drifts through Something in the Dirt’s bloodstream.

Their bond can be seen in the nuts and bolts of their filmmaking, but it’s especially obvious in their on-screen chemistry. If you don’t already know they spent the last decade working together, the casual bro-ness greasing their interactions will clue you in; they know each other inside and out, and that gives them space to repurpose that familiarity as casual, amiable paranoia. Where the relationship Benson and Moorhead have as storytellers is built on trust, the relationship between their characters in Something in the Dirt is built on suspicion and ego.

Here’s the truest thing the movie has to say about its subjects and the wild world of conspiracy theories: Even big-brain nitwits who believe in the same fundamental nonsense about the “real” world will eventually turn on each other, because they’ll all extrapolate the fundamental lie in their own ways. That means disagreement, which breeds conflict, which leads John and Levi to bitterly inch towards betrayal.

But Benson and Moorhead have no inclination to betray their audience. Yes, Something in the Dirt is a mind-melter, sweaty and cagey and sometimes downright inscrutable. But the movie understands the language and psychology of, for instance, QAnon lifers, who are routinely denied the satisfaction of seeing one bizarre prediction after another materialize. It’s easier to believe in the conspiracy than accept the truth, even when the conspiracy’s goalposts keep moving halfway across the field. That’s the headspace John and Levi live in, though they at least see some proof of concept instead of latching onto the first shred of nonsense to cross their paths.

Another movie might make these doofuses its villains. Something in the Dirt uses them as stand-ins for everyone stuck indoors, trapped on social media and devolving into conspiracy junkies by consequence. Our nonstop virtual connection to everyone and anyone has grown into a toxic replacement for meaningful physical connections and reduced far too many brains to pudding. John and Levi, plus the chunk of very real people they represent, are victims. The stuff of a movement like QAnon relies on fools for fodder. Without the vulnerable, conspiracy theories don’t flourish.

It’s possible that whatever empathy we have toward John and Levi is merely the product of Benson and Moorhead’s genuine camaraderie. If so, then surely they’re aware of how their relationship will influence viewers’ reception of Something in the Dirt. It’s a necessary anchoring element for a film built on microbudget DIY craftsmanship blended with faux-documentary talking head segments alluding to untold future catastrophe in John and Levi’s partnership.

What’s real and what’s imagined is kept a mystery by Something in the Dirt’s authors, while the promise of ultimate revelation keeps us hooked. This is Benson and Moorhead’s most complex production to date, and proof of the duo’s willingness to challenge themselves as much as their audience.

Something in the Dirt premiered on January 23 at Sundance.