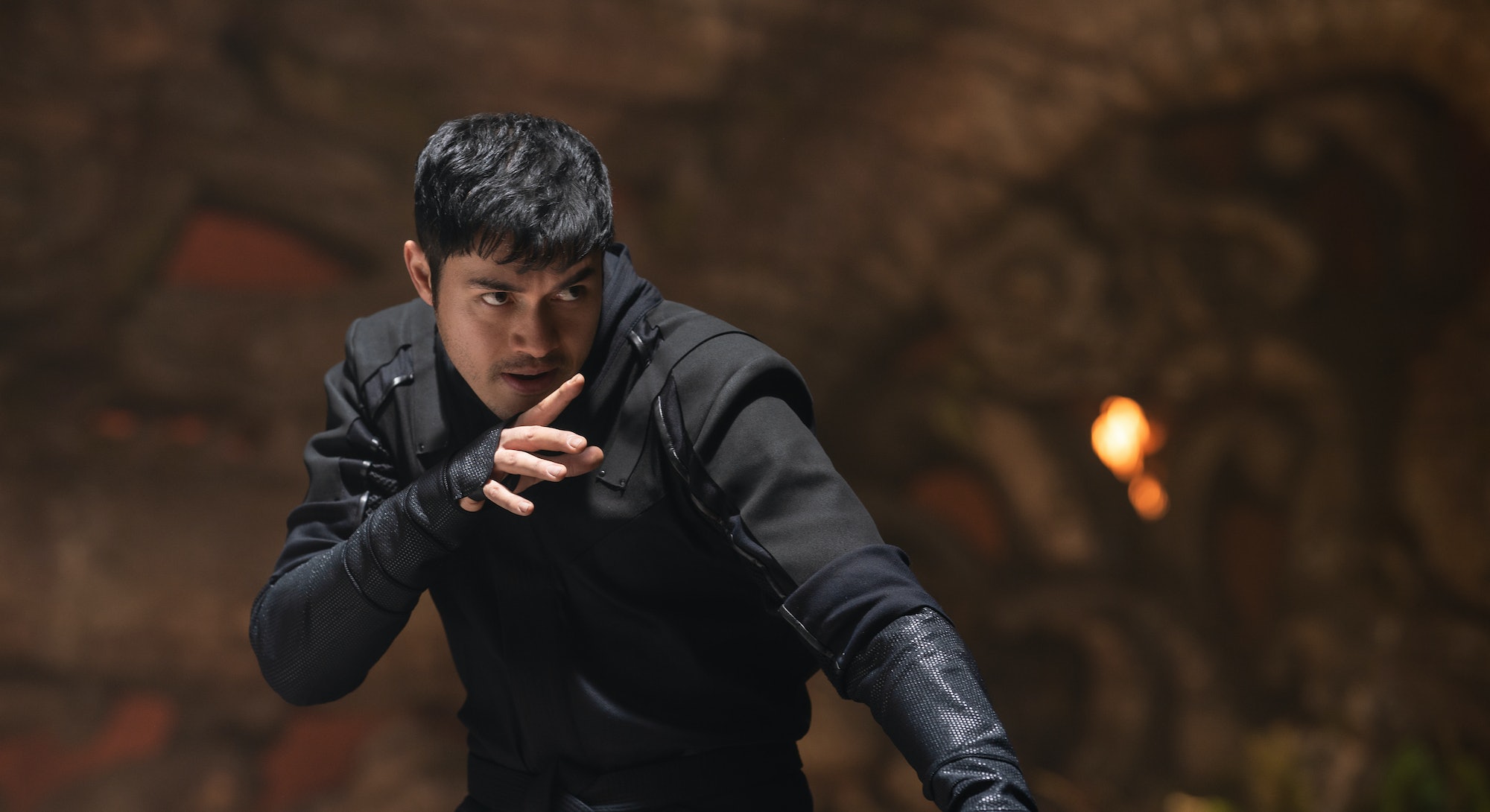 When Snake Eyes last graced the big screen eight years ago, he did so in total silence.

Throughout 2013’s G.I. Joe: Retaliation, Snake Eyes only gawked at the guns in Bruce Willis’ kitchen like a silent and deadly Power Ranger.

We still don’t know his name, but with Crazy Rich Asians heartthrob Henry Golding stepping into the role and Robert Schwentke (Red) at the helm, Snake Eyes has never been more fleshed out.

Snake Eyes is the rare summer blockbuster that pushes back against your expectations. It’s a story with bravado, pulling off gripping action sequences that other superhero movies can’t. It plays out on a smaller scale than you might assume, and the characters push its story instead of ominous galactic forces. But it also suffers from clumsy pacing and an unfortunately humorless script.

Orphaned when terrorists kill his father, Snake Eyes has grown from a traumatized child into a haunted man. When we first meet him, he’s wasting away in fight clubs where he triumphs because he’s a clever fighter. It’s a trait that stays intact throughout the zig-zagging story.

Golding really is the heart and soul of Snake Eyes.

After saving a yakuza spy named Tommy, later identified as Storm Shadow (Andrew Koji), Snake is brought to his shady new associate’s home within the Arashikage Clan of ninjas who’ve laid claim to a sprawling castle outside Tokyo. (How the Arashikage came to be and how its members stay busy are questions Snake Eyes doesn’t endeavor to answer.) Our hero is initiated into this mysterious organization during a trial by fire, completing four oddly paced challenges before he can become one of them.

Snake Eyes’ popularity has always hinged on his mystery, allowing G.I. Joe fans to project their own fantasies and explosive action scenarios onto him. It wasn’t until Japanese-American comic book legend Larry Hama got involved that the Snake Eyes story received a backstory: Snake Eyes was a white guy who trained with Japanese ninjas.

Hama intended to paint Snake Eyes as an outsider. However, his way of doing so played into certain Western stereotypes that date back to Tarzan and were perhaps most sharpened to their finest point with Tom Cruise’s The Last Samurai.

Luckily, in 2021, the experiences of the immigrant diaspora are more widely accepted as dramatically compelling in Hollywood — and the lived experiences of Golding, who’s half Malaysian and grew up in the UK, add profoundly to the character’s authenticity.

Even so, Snake Eyes could have done more to showcase Golding’s palpable charm and brilliant wit. The man has talent. But with its overstuffed script and flat characterizations, Snake Eyes doesn’t make the most of his talents.

Ready or Not and Guns Akimbo star Samara Weaving was a huge get for this film, but her character emerges as a tragic missed opportunity. As Storm Shadow, Koji’s exaggerated Japanese voice feels like a questionable decision despite the actor’s Japanese identity. Koji is a charismatic presence when using his natural British speaking voice or the American accent he adopts on the Cinemax series Warrior, but it’s hamstrung here by a grating stop-start accent that never feels fully believable.

A murderer’s row of genre actors like Iko Uwais, Peter Mensah, Úrsula Corberó, Haruka Abe, and Takehiro Hira fill out the ensemble, but their roles feel interchangeable. Thanks to the film’s disappointingly scattered script, it’s easy to lose sight of which characters are in play at a particular moment and what greater purpose they serve.

Though Snake Eyes fumbles as a superhero ensemble, it excels as a martial arts flick. Schwentke isn’t a refined master of the form, and the action choreography is more mercenary than it needs to be.

Snake Eyes hits harder and faster than the cartoonish, weightless Joes that came before. All the balletic, kinetic swordplay is given extra oomph by the film’s striking sound design. Snake Eyes wears its stylistic debt to kung-fu classics on its Kevlar sleeves — despite a requisite final battle that’s decided not by mastery of the blade but control of CG beasties. It just about works for the unique story crafted here, but that third act pulls Snake Eyes away from martial arts movie authenticity.

Plot weaknesses aside, Snake Eyes is an eye-popping visual feast drenched in neon primary colors and deep blacks. Schwentke keeps his camera up close and personal, lingering on Golding’s smoldering face via Dutch angles that intensify the emotions playing out across his features.

Snake Eyes might be frustrating to sit through at times, but it’s also occasionally gorgeous. Twice, the film took my breath away. Once with a wide shot of the Arashikage castle coated in the warm rays of a sunset and again as Snake sneaks through a guarded area, illuminated by sharp, golden lanterns. Whereas Marvel movies routinely flatten their images and fail to conjure the dynamism of comic book source material, Snake Eyes proves these movies never have to look so generic.

If I’m a little rough on Snake Eyes, it’s because I care.

If I’m a little rough on Snake Eyes, it’s because I care. As one member of a new generation of Asian-American pop culture junkies, I was left unimpressed when the whiteness of Snake Eyes became canon.

“An Asian Snake Eyes is all I’ve ever wanted,” exclaimed one Nerds of Color op-ed by Keith Chow in 2019, back when Golding was cast.

I’d echo that sentiment. Often whitewashed or exoticized, the martial arts genre is one that many Asian audiences embrace, though sometimes at arm’s length. It’d be nice to be represented as more than kung-fu warriors, but this space in action filmmaking still feels like one for Asian creatives to own, to the troubling degree of so often seeing white actors centered in it.

The blank personality and masked features of Snake Eyes, even as he arrived on the big screen in 2009’s The Rise of Cobra, really did allow me to project my own narrative onto him. At last, with Snake Eyes, the character — finally Asian himself — is supported by a diverse ensemble in a blockbuster that feels more tactile and weighty than your average superhero vehicle. Arresting mood lighting and an abundance of color keep Snake Eyes from ever feeling forgettable, but its rudimentary story and relentlessly serious tone also stop it from standing out.

On paper, this should be the movie of my dreams. But the disappointing reality of Snake Eyes is that despite the best efforts of its magnetic leading man, this flawed superhero blockbuster falls just short of greatness.