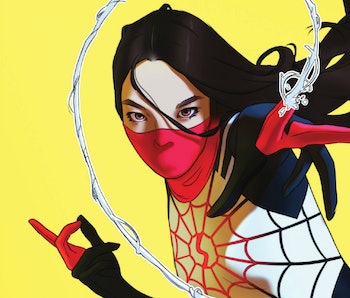 Peter Parker wasn't the only one bit by a radioactive spider. Straight out of Marvel Comics, Cindy Moon, also known as Silk, will soon star in her own live-action television series produced by Sony.

As reported by Variety in 2020, Sony is currently developing a live-action television series centered on the character Silk, who was introduced in the 2014 Spider-Man story Spider-Verse, the same one that influenced the 2018 Oscar winner Spider-Man: Into the Spider-Verse. Silk falls within Sony's ownership of the Spider-Man universe for film and TV adaptation.

Into the Spider-Verse producers Chris Miller and Phil Lord (the latter also penned the screenplay) will produce the untitled Silk series along with ex-Sony Pictures Entertainment head Amy Pascal. Variety also reported that Korean-American TV writer Lauren Moon, whose credits include the Freeform series Good Trouble and Atypical at Netflix, is in talks to write the script. And according to Deadline, Tom Spezialy (Watchmen, Ash vs. Evil Dead) will serve as both executive producer and showrunner.

Here's everything we know so far about the new Silk TV series, from the potential timeline to the comics you should read while you wait.

When will Silk premiere?

There is no timeline set for Silk. The series has yet to begin production. Normally, we'd try to speculate a bit here based on typical production schedules, but with the coronavirus pandemic still raging, it could be a while before anything starts filming.

Where is the trailer for Silk?

Where can I watch Silk? What streaming platform?

It is currently unknown what channel or platform Silk will end up on. However, Variety reported sources saying Amazon is in negotiations to acquire the project as a streaming series. Furthermore, Amazon is also "in talks" regarding other unnamed Marvel/Sony projects, which could mean an influx of Spider-Man-centric TV shows with Silk possibly at the center.

Wait, who is Silk?

Like Spider-Man, Silk is a web-slinging superhero from the Marvel Universe. She was introduced in the 2014 series Spider-Verse by Dan Slott and starred in her own Marvel Comics series by Robbie Thompson.

Unlike Peter, who spent his teen years adapting to his powers as a crime-fighter, Cindy barely got hold of them when she and her family were approached by Ezekiel Sims, a billionaire with similar powers to Spider-Man. After a few years of training Cindy, Ezekiel locks her up in isolation when the villain Morlun starts hunting and killing spider-heroes across the multiverse. Cindy is locked away for ten years until Spider-Man learns about her existence and breaks her free.

In the aftermath of Spider-Verse, Cindy adjusts to her new life as a superhero while working a desk job at J. Jonah Jameson's Fact Channel. (Jonah gives her the nickname "Analog" because, unlike her colleagues using iPhones and smart devices, she still uses a pen and paper.) Her personal life also involves making up for lost time with her family and friends, who all moved on in her long absence.

What is the plot of the Silk TV series?

The general plot of the untitled Silk series is currently unknown. Like all Marvel projects, it may or may not closely follow the comics.

Who is playing Silk?

It is currently unknown who is playing Silk.

Tiffany Espensen played "Cindy," a classmate of Tom Holland's Peter Parker in both Spider-Man: Homecoming and Avengers: Infinity War. Neither movie had Cindy in a significant role, nor did Cindy develop any spider powers in the movies.

In what universe will Silk appear?

Good question! The division between Marvel/Sony and Marvel Studios has never been blurrier, with Morbius confirmed to take place in the MCU and the Venom films, previously disconnected, now connected. A Silk movie was also in development at Sony, and it's unclear if Sony is now attempting two Silk projects at once or if the movie has become a TV project.

What Silk comics should I read?

Since there is little we know about the TV series, it never hurts to check out the comics to get an idea where the TV show might go. And lucky for you, Silk being a relatively new character means it's really easy to read most, if not all, of her adventures. Here's where to start.

More like this
Entertainment
Jan. 26, 2023
Corey Stoll could have the chops to make a live-action M.O.D.O.K. work
By Mónica Marie Zorrilla
Entertainment
Jan. 25, 2023
The MCU could bring back a hero from its most underrated TV show
By Dais Johnston
Entertainment
Jan. 19, 2023
Ant-Man 3 interview proves Marvel is taking the wrong lesson from Jodorowsky’s Dune
By Ryan Britt
LEARN SOMETHING NEW EVERY DAY.

This article was originally published on Sep. 4, 2020