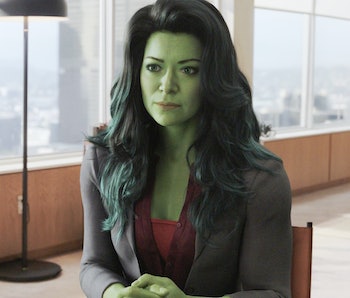 For better or worse, She-Hulk: Attorney at Law isn’t following the typical formula of a Marvel Cinematic Universe show. After Episode 6, there was still no clear information on who the big villain is. Titania was an early contender, and then there was the Wrecking Crew. But it wasn’t until the end of Episode 7 that the real villain was confirmed: A mysterious online figure known as HulkKing we’ve only seen in online messages. We don’t know much yet, but we know enough to suggest that HulkKing could be a well-known character, and even a future Avenger.

This theory requires a few mental gymnastics, but bear with us: What if HulkKing was actually Hulkling?

Teddy Altman, also known as Hulking, is a beloved comic book character who’s a member of the Young Avengers and husband to Scarlet Witch’s son, Wiccan. Though he sounds like another relative of Bruce Banner, he’s actually not part of the Hulk family at all. As the love child of Mar-Vell, a Kree, and Princess Anelle, a Skrull, he inherited qualities from both races. He adopted the name Hulkling because he was strong and green like a Hulk, and also able to shapeshift like a changeling.

If he’s actually the Big Bad of She-Hulk: Attorney at Law, it would mean a significant change to his character. Teddy Altman has always been a superhero and a longtime member of the Young Avengers, so becoming an internet-based mastermind would be quite the shift. Why would he want to harness Jennifer Walters’ blood? Could he just be looking for other super-strong people?

Then again, the timing would be perfect. An upcoming Marvel series is set to explore the Skrull Secret Invasion, and the She-Hulk episode featuring Megan Thee Stallion reminded us of the existence of shapeshifting in the MCU. All the pieces are certainly in place.

The Inverse Analysis — If Hulkling is going to enter the MCU, why not put him in another Hulk-adjacent hero’s show? Sure, by making him a villain he’d need redemption to become the Young Avenger fans know and love. But seeing as no Young Avenger projects are announced yet, there would be plenty of time to rehabilitate his image.

Hulkling is one of the most wholesome characters in modern Marvel comics, so reimagining him as a supervillain seems improbable. But the MCU hasn’t hesitated to completely revamp notable characters. Agatha Harkness, the witchy villain of WandaVision, worked for the Fantastic Four as a nanny in the comics, so a similar change isn’t out of the question. And come on; if Marvel ever wants to introduce the popular Hulking down the line, it would be confusing to have a HulkKing kicking around too.