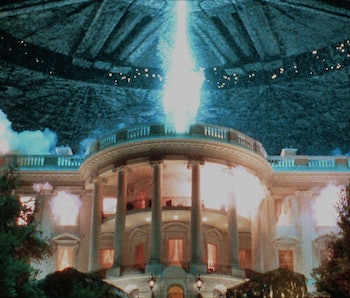 One quintessential sci-fi movie fuses multiple generations of genre history, mixing all the best cinematic tropes to create a film that transcends space and time. It’s also the only movie you need to watch this weekend.

An original, standalone concept that Roland Emmerich both directed and co-wrote (with Dean Devlin), it still felt undeniably familiar to audiences from the day it debuted. Independence Day mixes the ‘70s disaster movie with the ‘50 alien invasion thriller, operating with a modern blockbuster budget and allowing the charm of its high-wattage stars to carry it further into the realm of the sci-fi epic.

With one sequence, in particular, Independence Day changed the nature of the Hollywood blockbuster. Here’s why you should revisit this classic, now that it’s streaming on HBO Max.

That sequence, of course, is the one in which aliens set about destroying Los Angeles, New York, and the White House. The movie, which proceeds with a militaristic efficiency that befits its highly trained characters, spends its first hour establishing that aliens are soon coming to Earth. But before that, Independence Day introduces a series of everyman protagonists, each easily distinguished by certain tropes. There’s the nerdy and gloriously Jewish Jeff Goldblum, cool fighter pilot Will Smith, Bill Pullman as another stoic fighter pilot (who happens to be president), and Randy Quaid as the alcoholic everyone thinks is crazy for saying he was once abducted.

After Independence Day, each of these actors would be defined by these roles. There’s hardly any character development in Independence Day, but a little goes a long way. Goldblum’s David Levinson is paired up with his father (Judd Hirsch) and friend (Harvey Fierstein), two nebbishy fellows who complain a lot. The picture-perfect Will Smith, meanwhile, is quickly separated from his beautiful girlfriend (Vivica A. Fox) and fueled by his determination to be back with her. And Pullman, who’s a Gulf War veteran but described early on as a “wimp,” gets a chance to toughen up.

Speaking to Complex in a retrospective, Emmerich said in 2016 that everyone made Independence Day on a tight deadline, owing to another sci-fi title that they felt might take the wind out of their sails. “We made the movie under quite a lot of time pressure because we wanted to beat the Warner movie [Mars Attacks] from Tim Burton that we knew about,” he explained.

This makes a certain amount of sense: Mars Attacks was a parody of alien invasion movies, Independence Day was an alien invasion movie. Moreover, it’s clear that the two movies were drawing from the same well of ‘50s alien-invasion pictures, complete with green lasers, force fields, and kooky scientists (a long-haired Brent Spiner steals his scenes).

While nobody would ever confuse the self-aware Mars Attacks! with the self-serious Independence Day, the two both mainly see aliens the same way: as a larger-than-life excuse for audiences to kick back and have a good time.

Emmerich and co-writer Devlin met on the set of Emmerich’s previous film, Moon 44, shot in his native West Germany. Acting in the English-language movie, Devlin felt Emmerich’s script was rather stilted and asked Emmerich if he could punch up its dialogue. Emmerich agreed, and a partnership was formed.

The two soon realized they had a shared interest in large-scale science-fiction movies, the type of Star Wars-esque spectacle that would take their breath away. Together, they made a big sci-fi adventure, Stargate, in which humans traveled through a mysterious interstellar wormhole. While on the press circuit for Stargate, which became a sizable hit, Emmerich was asked if he actually believed in aliens. That question prompted Emmerich to start working on a major alien-invasion picture: Independence Day.

As a movie, Independence Day moves from Moment to Moment, hinging on big one-liners and money shots. Most of these still pay off despite their dated visual effects. Made during the transition between practical and digital effects, the explosion of a five-foot-tall White House miniature still stands out. But there’s also Smith’s cooler-than-cool “Welcome to Earth” knockout punch, the newscaster asking Angelenos not to fire their guns at visiting spacecraft as they may start an interstellar war, and, of course, Pullman’s big speech at the end.

On set, Devlin told Emmerich that they needed what he referred to as a “St. Crispin’s Day” speech, a reference to Act 4, Scene 3 of Shakespeare’s Henry V, in which a king tries to convince his soldiers they will triumph in a battle where the odds are stacked against them. Planning to rewrite the speech later, Devlin told Complex that he “went into the other room and literally in five minutes... whipped the speech out, put it into the script — we didn’t even read it. It was just a placeholder.”

It was meant to be changed, but why bother meddling with perfection? This part of the script was apparently overlooked until it came time to film it, and Pullman knocked the rousing dialogue out of the park. Pullman, who told Complex that he studied the speeches of Robert F. Kennedy to prepare, had the extras on set applauding, just as audiences later would in theaters.

When Independence Day came out, the trend in blockbusters was, to quote Caryn James’ New York Times review, either an “earnest Michael Crichton film or an earnest Michael Crichton clone” — either way, based on the author of the day. Movies like Jurassic Park and Terminator 2 wrestled with new advances in technology and how they could change humanity.

But Independence Day, James would write, “is the anti-Crichton.” It didn’t want a big Hollywood budget to wrestle with equally big ideas. It wanted to blow things up. And while the question of whether Independence Day has truly held up is debatable, that’s exactly what it did.