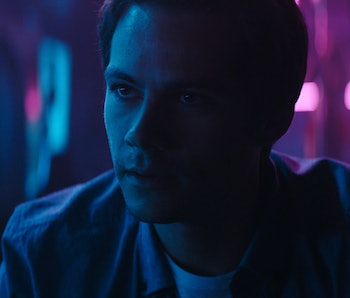 Dylan O’Brien’s odd career trajectory began with his debut on the popular MTV series Teen Wolf, which ran from 2011 until 2017. O’Brien played fan-favorite Stiles, the resident human of the wolf pack. In the years that followed, the actor continued playing teen-oriented roles, such as the protagonist Thomas in The Maze Runner trilogy, a fellow intern in the Owen Wilson and Vince Vaughn starring The Internship, and the lead in his relatively underseen romantic-comedy The First Time.

Recently, however, we’ve seen O’Brien dive into more adult roles which demonstrate his considerable range. Just as talented as many of his contemporaries but often saddled with projects that don’t measure up to his potential, it’s exciting to see him take roles that range more in tone and style. From last year's science-fiction romance Love and Monsters to his turn in the Taylor Swift-directed short film All Too Well and Mark Rylance’s 2022 gangster flick The Outfit, the actor’s portfolio has been steadily stacking up an eclectic group of projects.

However, it’s truly between Love and Monsters and this year's Flashback that shines a light on his star quality. The latter film, especially, is worth seeking out, now that it is streaming on Amazon Prime Video.

Flashback is a mind-bending thriller written and directed by Christopher MacBride (The Conspiracy). The movie follows O'Brien's Fred, a man who begins to have horrific visions involving Cindy (Maika Monroe), who disappeared during high school. To recall what happened to her, he reaches out to his old friends Sebastian (Emory Cohen) and Andre (Keir Gilchrist) to try and unravel the past. The four of them used to take a mysterious narcotic called Mercury together, and while the side effects fog his brain in his search for Cindy, Fred realizes that the truth will only be found in his memories.

With better marketing, Flashback might’ve stood a chance in achieving something of a cult status. The reality-bending sci-fi film has an unreliable narrator and operates in nonlinear split timelines, and the result is as visually disorienting to the viewers as Mercury is to the characters.

Due to Fred’s use of Mercury, the storyline can blur the lines of time. Is this version of his future a hallucination? Is his past foggy because of the narcotic, or is he having some sort of long-form extended release? Is his subconscious covering up more than his brain is ready to handle? The split narrative pushes us further adrift as Fred’s past and present begin to converge.

The truth about Mercury (also referred to as “merc” in short) is uncovered by Fred and Cindy. When taking merc, the taker can experience multiple timelines. According to Cindy, it’s a “release” and an escape from being trapped. With it, they’re able to break out of their seemingly pre-determined timeline to experience all possibilities and outcomes.

With a tone that recalls films both good and bad, such as Donnie Darko (good) and The Butterfly Effect (not good), it’s difficult at times to determine if the movie is meant to be about something greater or not. Is it simply about the effects and trappings of suffocating memories? Is it a look at drug-induced mental decay? Or maybe it’s meant to be about fleeting friendships and the hardships of youth?

Greatly aided by the disarming score and some deliberately frenzied editing by Matt Lyon, the film's strength is that, by the end, the so-called meaning of the film is ultimately meaningless. A film that would’ve fit best in the early to mid-2000s era, Flashback is true to its name in recalling a time when mid-tier, indie budgeted thrillers were given more room to breathe. With its surprisingly patient pacing, the film takes its time uncovering some of the greater mysteries of the story as we continue to become invested in the wellbeing of its lead.

As we inch closer toward the end of the year where either prestige, awards-friendly films or the next big Marvel event will dominate the discussion, it’s worth looking back at some of the oddities of the year. Dylan O’Brien brings an impressive physicality to the character who is in the process of rebuilding himself, and Flashback is worth it for O’Brien’s performance alone.