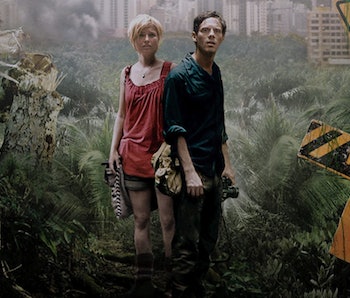 Before directing big-budget blockbusters, Gareth Edwards found himself stifled by them.

As the director behind 2014’s Godzilla and 2016’s Rogue One: A Star Wars Story, Edwards has delivered crucial installments in Hollywood’s most storied franchises. But Edwards never would have landed Godzilla were it not for the strengths of his 2010 directorial debut.

An underrated movie that remains fascinating in its own right, this hidden gem is streaming on Amazon Prime right now. Here’s why it’s worth checking out.

When Monsters first hit theaters, Edwards told Den of Geek that, back in the ‘90s, when he was getting his film degree, he saw Jurassic Park. “My only disappointment was that I was hoping [the dinosaurs] would get on the mainland,” he said. Edwards wanted to see monsters invading modern suburbia. But then came Steven Spielberg’s remake of War of the Worlds, and he felt that idea had been suddenly taken by one of the genre’s foremost filmmakers.

Undeterred, Edwards developed an idea he called “Blair Witch meets War of the Worlds,” which sounded very original — until the trailer for J.J. Abrams’ found-footage Cloverfield dropped. But even with his hopes dashed, Edwards found inspiration in that late-aughts smash hit. “If Cloverfield was like September the 11th, the logical progression from there is Afghanistan,” he explained, pointing to the film’s crackling political charge and exploration of humanity responding to a sudden, city-decimating attack. “Let’s do a film that’s set a few years later, where it’s a war going on somewhere on the other side of the world, and no one cares,” he suggested.

For Edwards, who is British, the other side of the world looked like Mexico. Monsters is set near the Mexican-American border, a perpetually fraught region that in his story has been turned upside down by a NASA probe that fell to Earth six years before the film’s opening. With this probe came gigantic extraterrestrial life, crash-landing in the area. It’s not quite right to say no one cares about life in this region — certainly the people living there do — but this border zone has been neglected during the military’s constant battles against these creatures.

Without mentioning them too often, Edwards invokes two struggles prevalent in this region: drug cartel-related violence and immigration. Wandering around Mexico is Andrew Kaulder (Scoot McNairy, pre-Batman v Superman), a photojournalist on the hunt for monster-related stories he can sell to a newspaper, the more traumatic and harrowing the better. Instead, he’s sent on an assignment to rescue the daughter of the paper’s owner, Samantha (Whitney Able), in order to get her home in time for her wedding. After finding Samantha in a hospital, Andrew starts to figure out how the pair can cross back across the United States’ imposing border wall.

It’s easy to see why Monsters brought major studios to Edwards’ doorstep. Though this was his first film, he clearly understood the proper pacing of a monster movie: introduce just a hint of what’s to come at the beginning, then immerse the audience in the plot and characters, so genuine fear can set in once those titular beasties rear their extraterrestrial heads.

Scenes of rubble and detritus abound in Monsters, located often adjacent to signs of life. Houses are destroyed, military fighter jets sunk in swamps, tanks abandoned — and then there’s a party, filled with people doing their best to enjoy life in these ruins. Nobody questions it; the world of Monsters is so realistically depicted its dangers are simply part of a new normal.

Filmed in Belize, Mexico, Guatemala, Costa Rica, and Gavelston, Texas, there’s a local flair to the early scenes of Monsters that ground its characters in their surroundings. In these scenes, squid-like aliens are mostly seen in cartoon PSAs, intended for children. Populated with non-actors, these scenes very much ground Andrew and Samantha as outsiders.

Andrew and Samantha try any number of methods to get from Mexico to the United States, traveling by train, then by boat, then on foot. Edwards said in an interview with D Magazine that immigation was “not on my agenda” while shooting, but this issue looms large over the film. Central to the characters’ planned escape are their passports, the only proof they have that they’re American.

During one sequence, which Edwards said reminded him of a Sergio Leone movie, Andrew and Samantha are set back to square one in searching for a way out. They’ve screwed up everything through their own actions and so offer everything in the world that matters to them to a stubborn ticket-taker, who isn’t interested. It’s not a scene with immediate stakes; there are no monsters at the door, and yet their desperation is that of people trying to flee a hurricane. Monsters, more often than not, draws its tension from the struggle of two people trying to get somewhere.

Then the monsters show up. Edwards, who had a background in special effects, designed all the creatures himself for the movie, using off-the-shelf products. It’s to his credit, then, that these effects hold up. There’s rarely a close-up or focus on destroyed tanks because the movie doesn’t need them. And when the movie does need to show the monsters, it depicts them with true otherworldly wonder.

Monsters became a hit through iTunes rentals after its release, and interviewers began asking Edwards the obvious question: after doing so much with so little, would you want to work on a major franchise? Edwards told Collider he’d “always dreamed” of having access to a big budget, but he didn’t “want to lose the things” that made the low-budget work of Monsters so special.

Its sense of immediacy, grounding the extraterrestrial in a real world, a clear understanding that less is more: these are elements of Monsters Edwards carried directly over to Godzilla and Rogue One. (Think about how much, or rather how little, screen time is actually offered to Godzilla or Darth Vader in those films.) It’s not easy to bring a DIY mindset to massive Hollywood productions, but Edwards, building from the template he established in Monsters, is certainly proof it can be done.

Monsters is currently streaming on Amazon Prime, Tubi, and Crackle.