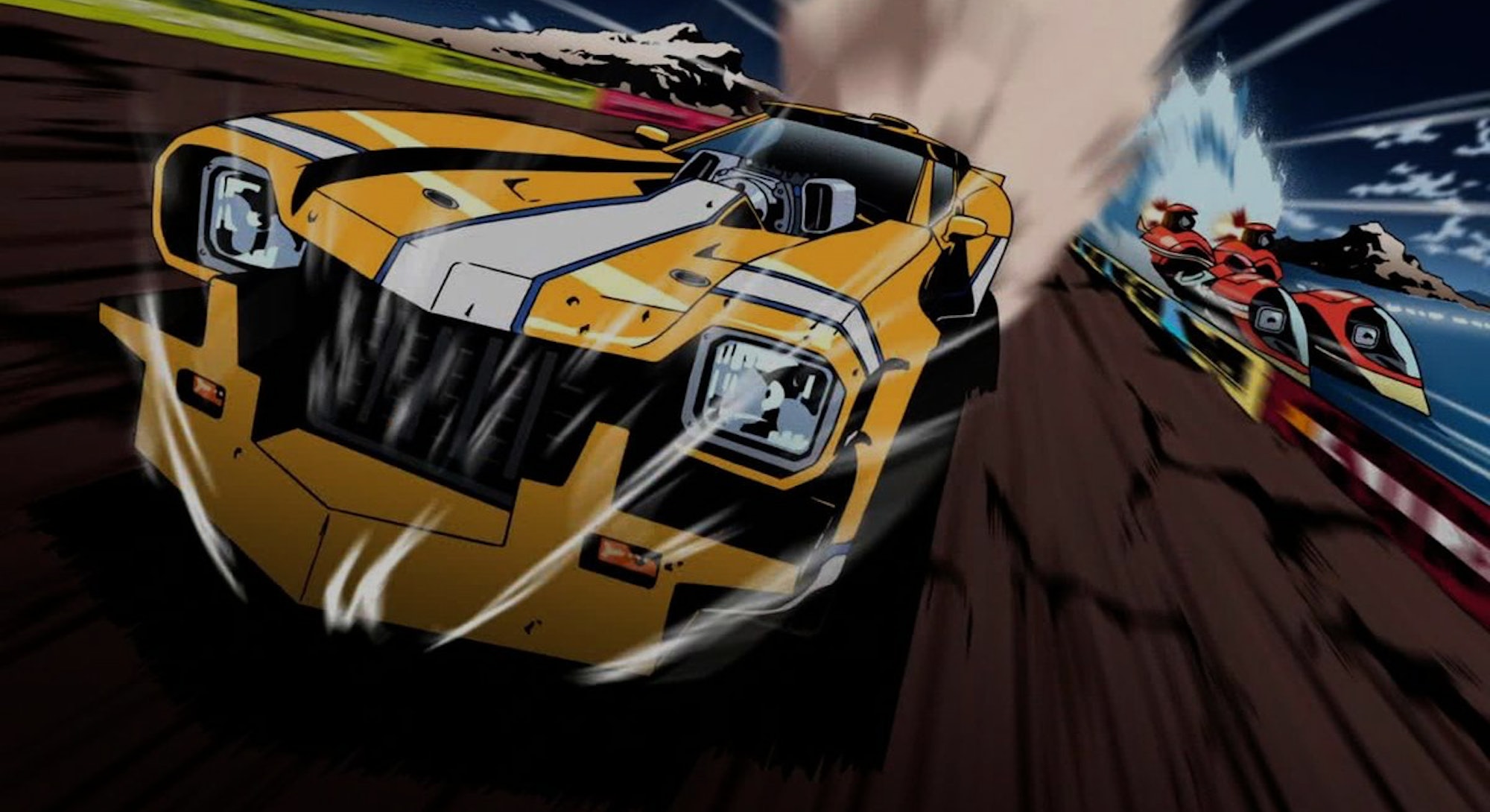 When movies try to straddle too many genres at once, they often fail miserably.

Even relatively straightforward hybrids like horror-comedies can end up leaning more toward one of their two halves, letting down fans of the other in the process. Consider that episode of The Simpsons where Mr. Burns goes to the doctor and learns that he has every disease known to man, but that somehow they are perfectly balanced, keeping Burns healthy and possibly even invincible.

That's the kind of mind-boggling tonal synergy many genre mash-ups strive for and the kind on full display across what’s undoubtedly the best racing movie not starring Vin Diesel.

Acclaimed Japanese animator Takeshi Koike made his directorial debut with a film that took him nearly a decade to finish. Perhaps the last great film made with entirely hand-drawn animation, it’s also a thrilling combination of everything you might want from an anime: spaceships, Nazi robots, aliens, punks, Akira-like kaiju, space muscle cars, Transformers, romance, and tons of explosions. Somehow, it all works.

12 years since its initial release in 2009, Redline remains one of the most exhilarating, high-octane anime experiences you can have. A love letter to traditional hand-drawn techniques, over-the-top '80s movies, and OVAs (Original Video Animation, essentially Japan’s direct-to-video), it’s the kind of film that could have easily birthed an entire franchise.

The basic plot goes like this: Sweet JP is a famous but still relatively small-time human driver in the galaxy's biggest entertainment competition: Redline. (Think Wacky Races by way of Death Race 2000.) After another competitor drops out, JP gets a chance to participate in the biggest Redline race. One problem: the race is set to take place on Roboworld, a fascist planet full of Nazi cyborgs that have vowed to kill any racers who actually make it to Roboworld’s surface. Elsewhere, romance is blossoming between JP and fellow racer Sonoshee, two planets are using the race to break a long-standing peace treaty, and JP must deal with a debt he and his best friend Frisbee owe to the mafia.

From the get-go, Redline boasts a unique galaxy full of incredibly detailed backgrounds and character designs. Much like how the original Star Wars introduced audiences to a massive universe and its rich history by dropping ample references without slowing down to explain them, Redline fills out its world by teasing a multitude of stories we’re not seeing on screen.

The film's hand-drawn animation took nearly a decade to finish, and its distinct pop-art style adds a level of surreal absurdity to this sweeping story, allowing for easy suspension of disbelief. When the film introduces us to all the drivers competing in Redline, we briefly see colorful characters like an alien princess with superpowers she's vowed not to use in the race (despite everyone else using deadly weapons to their advantage) and MachineHead, a cyborg who fuses with his car.

It’s no surprise that Redline was initially pitched as a TV show, with the production team spending a long time fleshing out all of its possible storylines — including a political subplot that unfolds simultaneously with the central, heart-pounding race.

Redline doesn't really hide its political dimensions, and it's easy to miss those maneuverings in the background, given how much there is to look at in terms of gorgeously imagined aliens and fast-paced, kinetic action. The movie hints at the political state of its galaxy in subtle ways, painting a picture of a fragile peace everyone is looking to break. That the race is set to take place on Roboworld is by design, as is the film's use of fascistic imagery. Whereas plenty of anime tends to use Nazism as a visual shorthand for over-the-top bad guys, Redline gives meaning to its Prussian-like Roboworld by exploring how fascist regimes use flashy imagery and pageantries to mask the true horror of their actions, suppressing artists and individuals along the way.

Without spoiling much, Roboworld is hiding something nefarious, and evil forces will stop at nothing to keep it hidden. (One scene even describes Roboworld handing one of its own planets to space refugees as a way to distract the galactic community from its dark intentions.)

Redline is the type of anime film that no longer gets made: an original, go-for-broke sci-fi epic with such an incredible visual style that many of its perfect shots could literally be framed. The multi-layered story at the heart of Koike’s film is fascinating to behold, even inside the larger-than-life confines of a candy-colored racing extravaganza.