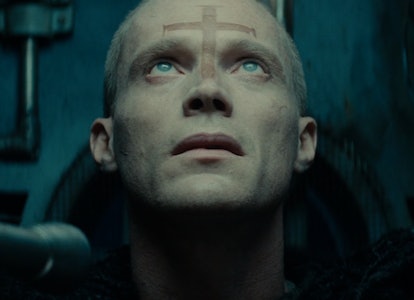 How do you pull off a genre mashup enticing enough for audiences to sink their teeth into? Well, adding vampires certainly helps. When it comes to the tried and true monsters of the horror genre, vampires have often proven to be the most flexible.

From coming-of-age stories like The Lost Boys and Near Dark, comedies like Vampire in Brooklyn and What We Do in the Shadows, superhero spectacles like Blade and Morbius, and romances like The Twilight Saga, vampires can be easily plugged into any existing genre. Think of your favorite vampire movie, and you’ll most likely find that it’s a fanged combination of two existing genres.

In 2011 one film was ambitious enough to put three different genres into a blender. What emerged was a sci-fi, western, horror film that’s one-part Equilibrium, one-part The Searchers, and one-part Underworld, and one of the most entertaining vampire flicks of the past decade that mostly slipped under the radar.

Oh, and it also happens to star a beloved Avenger, before he became an Avenger.

Priest is a 2011 film written by Cory Goodman and directed by Scott Stewart. It is loosely based on the Korean comic book of the same name by Hyung Min-woo. The world and stakes are quickly established by a killer animated prologue by Samurai Jack and Star Wars: Clone Wars creator and director Genndy Tartakovsky. Despite the fact that the film is paying homage to three well-worn genres and playing within the sandbox of those conventions, any fears that Priest will lack a unique vision are quickly expunged with an adrenaline-tipped stake to the heart.

Set in an alternate history where humans and vampires waged war against each other for centuries, Priest stars Paul Bettany as the titular Priest, a warrior monk who helped rid the world of most of its vampires during the war. In the years since the war, the Priests have been disbanded by the Big Brother-esque fascist regime known as The Church, who keep order in walled cities so polluted that the sun has been blocked out. The few vampires that remain have taken to dwelling in underground reservations, but are no longer a threat, or so it would seem.

Priest learns that his niece, Lucy (Lily Collins), has been kidnapped by a gang of vampires in one of the free towns that exist in the desert outside of the walled cities. Priest requests that The Church reinstate his status so that he can save his niece and wipe out the vampire gang, along with the help of the free town’s sheriff, Hicks (Cam Gigandet). The Church’s leader, Monsignor Orelas (played by the late Christopher Plummer) denies him. This of course means Priest disobeys The Church and sets off to save his niece.

What begins as a simple rescue mission becomes part of a much larger conspiracy as Priest and Hicks discover the vampires have been creating a new army with plans to take the walled cities as their own. This vampire army is led by the mysterious Black Hat, portrayed by an immensely entertaining and scenery-chewing Karl Urban, who paves a path of destruction with an armored train that blocks out sunlight.

While Priest and Hicks are chasing Black Hat, the Priestess (Maggie Q) is sent by Orelas to hunt down Priest, setting the stage for a three-way showdown with guns, knives, and kung-fu atop a speeding train.

If that last sentence doesn’t make it clear, Priest wears its pulp sensibilities on his sleeve. It’s loaded with familiar faces from the horror arena, including Brad Dourif (aka Chucky), Stephen Moyer (aka Vampire Bill), and Madchen Amick (aka Shelly from Twin Peaks). It’s punctuated by slick, stylish action and plot twists, that although unsurprising, are emotionally valid, filled with interesting subtext concerning religion-based colonization.

At its core, Priest is a simple story told well, elevated by cool action sequences and striking imagery. It feels like the kind of midnight movie destined to be discovered and reappraised by teenagers and genre fans in the years to come. So before Karyn Kusama elevates the subgenre with her western take on Dracula, step into the weird west with Priest.