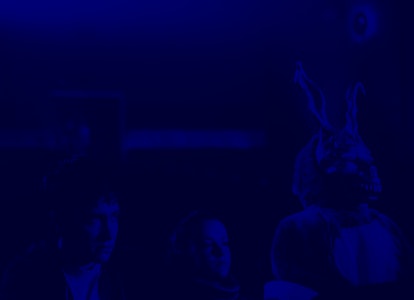 Few films are as iconic or revered as the daring sci-fi movie that launched Jake Gyllenhaal’s career. But ever since its premiere in 2001, this time-loop mind-bender has emerged as a certified cult classic.

It’s also one of the weirdest sci-fi films of the past twenty years.

Part coming-of-age story, high school romance, and time travel thriller, Donnie Darko somehow manages to blend all of its various elements into one cohesive and beguiling product. Even the design of the film’s most memorable creation — a man in a metallic rabbit costume that appears to Donnie in his dreams — perfectly rides the line between the creepy and surreal. Then again, the same can be said for all of Donnie Darko.

The movie is available to stream now on Amazon Prime as part of its partnership with IMDb TV. Here’s why you need to add it to your watchlist.

Donnie Darko wakes up in the middle of the night and sleepwalks out of his house. Outside, he comes across a giant talking rabbit. “28 days, six hours, 42 minutes, and twelve seconds — that is when the world will end,” warns the rabbit in his smooth, ethereal voice. Donnie, smiling like he can’t quite help it, responds by simply asking, “Why?”

The next morning, Donnie wakes up on a golf course. Upon returning home, he finds out that a jet engine crashed into his bedroom while he was out, and no one can quite explain how it ended up there.

That’s where Donnie Darko begins, but it only get weirder from there.

For nearly all of its 113-minute runtime, writer and director Richard Kelly succeeds in bringing viewers further and further into the mind of Gyllenhaal’s Donnie, whose psyche proves to be disturbing and dreamlike in equal measure. Kelly shoots sequences from Donnie’s perspective and showcases his visions in all their strange glory. He even goes so far as to place the camera where Donnie’s mirror is at one point, allowing us to see a version of the very reflection that Donnie himself sees.

One of the great joys of watching Donnie Darko is seeing all the ways the film manages to externalize its protagonist’s isolated and increasingly unhinged mental state, placing him in locations and rooms that always feel a little bit off. However, no scene in Donnie Darko is as engrossing or effective as the one in which Donnie goes on a movie date with his girlfriend, Gretchen (Jena Malone).

Donnie sits next to Gretchen in an otherwise empty auditorium, only to be joined by “Frank” — the man in the bunny suit who appears to Donnie throughout the film. It’s an uncanny image. The conversation that Donnie and Frank share doesn’t make much sense while it’s happening either, and it only gains meaning later on in the film. That’s more or less the story of Donnie Darko, a film that grows in depth and emotion the more time you devote to it.

It’s one of the most original and mesmerizing sci-fi movies that you’ll ever see, a Lynchian journey that’ll stick with you long after you watch it for the first time.

Donnie Darko is now streaming on Amazon Prime in the U.S.