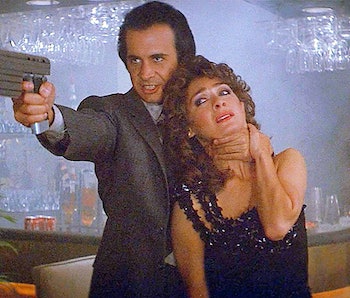 1984 was a big year for male movie leads. Eddie Murphy burst into stardom with Beverly Hills Cop, Harrison Ford continued to cement his legacy with Indiana Jones and the Temple of Doom, Arnold debuted The Terminator, and Bill Murray and Dan Aykroyd made Ghostbusters the year’s number one movie. It was a year where legends were established by movies that would define the ‘80s for decades to come.

Runaway, written and directed by Michael Crichton, missed out on the mythologizing and money. Crichton’s 1984 movie was a flop, despite starring Tom Selleck at the peak of his popularity. But while it won’t replace Robocop as the definitive 1980s sci-fi cop movie, it’s quite memorable in its own right.

Runaway’s perks start with Selleck, an actor not typically associated with sci-fi. In 1984, Selleck was in the middle of his run on eighties standby Magnum, P.I., and in fact won an Emmy that year for his performance as the Hawaii-based mustachioed private eye. Magnum didn’t try to be great art, but Selleck played the role with a clear charm and easy smile.

Crichton, on the other hand, was developing a reputation for forward-thinking action through novels like The Andromeda Strain and movies like Westworld. With the latter he had pondered robots that looked like humans. In Runaway, he sought a more realistic view of a world that would soon be filled with helpful — and not-so helpful — machines.

This means Ramsay and his new partner Thompson (Cynthia Rhodes) visit farms where robots gone haywire plow through fields, construction sites where robots can’t stop dropping things from the sky, and homes where robots have learned how to use guns.

The robots of Runaway aren’t human. They fit into the world of the 1980s, and wouldn’t look particularly out of place on an episode of Magnum, P.I. about an evil scientist. And who should show up in Runaway but Dr. Charles Luthor (Gene Simmons, for some reason), an evil scientist with little spider bots that latch onto people and explode?

Crichton himself called this a movie about “good guys versus bad guys.” Runaway revolves around integrated circuits that override robot safety features, which Luthor wants to sell on the black market. But the story is an excuse for Crichton to show off the technologies of his imagined future, which are remarkably similar to those seen today.

Take the household robot murder where Ramsay first notices something is off. Before an officer enters, the police send in a small drone to investigate. These small hovering triangles wouldn’t look out of place in the modern market. Then there’s Ramsay’s own home robot, which looks after his son Bobby (Joey Cramer) when he isn’t around. It keeps track of Bobby’s homework and cooks meals, like an Alexa mashed up with a robotic sous vide cooker.

There are some technologies in Runaway which haven’t quite panned out, but even these misses offer a fascinating look into an imagined future. One of Luthor’s key weapons are smart bullets, which are essentially handheld heat-seeking missiles. While these aren’t around today, the American military’s Extreme Accuracy Tasked Ordnance rounds can maneuver in mid-air.

Another almost-prediction comes in self-driving cars. Ramsay’s police station has cars robots drive, but the robots are actually in the driver’s seat acting as chauffeurs. Some movies would put this assortment of technologies at the forefront of the story, but Crichton keeps them in the background, letting them weave in and out as needed.

Runaway is a surprising movie, and not just because of its technological predictions. It’s a taut little mystery, eschewing the society-level story told in Westworld. It’s not about if technology is good or bad: It’s just about who’s using it.

Runaway is streaming on Amazon Prime.

More like this
Culture
Jan. 29, 2023
A 2011 Jake Gyllenhaal thriller reinvented the time travel movie
By Alex Welch
Culture
Jan. 21, 2023
Steven Soderbergh’s only sci-fi film is also one of the century’s most underappreciated
By Mark Hill
Culture
Feb. 2, 2023
After Harry Potter, Daniel Radcliffe Obviously Had to Play a Farting Corpse
By Alex Welch
LEARN SOMETHING NEW EVERY DAY.
Related Tags
Share: