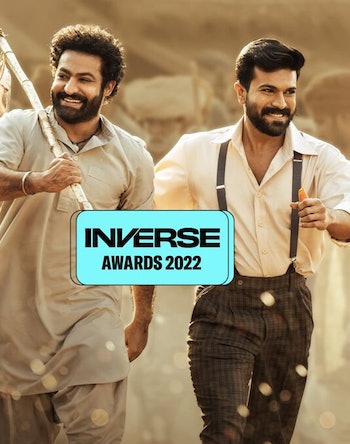 RRR — or Rise. Roar. Revolt. — has been the revolutionary hit of 2022, a label that applies both for its blistering anti-colonial action and the way it shattered the glass ceiling for Indian movies in the West. Rajamouli’s Telugu-language musical epic, about real Indian freedom fighters who form a fictitious friendship, began its life as a record-breaking domestic blockbuster in March. It was reborn States-side via streaming and gradual word of mouth — the kind usually reserved for underground cult films — resulting in a theatrical re-release in June.

It’s the kind of massive success that earned RRR Hollywood awards buzz (its Oscar chances remain strong at the time of writing) as well as its fair share of criticism. Rajamouli’s stories tend to juggle both Hindu mythology and nationalist imagery, leading critics to accuse RRR of supporting outlooks endorsed by India’s right-wing Hindutva government.

Rajamouli has no qualms about his filmmaking approach.

“I want my audience to feel the film, rather than think the film,” he tells Inverse. Where he belongs as a movie watcher is a topic on which he feels similarly. “I like to make the movies that I like to watch.” It’s something of a no-brainer: who wouldn’t enjoy watching human friendship-Voltrons and wild animals maul colonial officers en masse?

The film’s exhilarating musical numbers and super-heroic vistas lend themselves to the kind of cinematic immersion Rajamouli describes, with scene after scene of chiseled, powerful posture preceding the kind of righteous, over-the-top violence dreams are made of. The result has been in-theater hooting and hollering everywhere from Hyderabad to Hollywood, lending many to ponder the ingredients of the director’s secret sauce.

According to Rajamouli, crafting powerful imagery is a two-step process. The first part is passive, but imaginative, and it begins with the way he absorbs the world around him.

“On one hand, the love for striking visuals is a constant process, whether visuals that I come across, that I see, that pop up in my mind,” he says. “That happens irrespective of whether I'm making a film or writing a story. I'll be thinking about how that visual can come into being, what kind of emotion can be associated with that visual, or even if I see a nice, spectacular location, I'll be immediately thinking what kind of emotion can be exploited. So that's one part of my mind.”

“Reality is how I lead my actual life. Filmmaking is my profession.”

The second, more active step involves transforming that catalog of thoughts into something tangible — often something in motion.

“Once we start writing the story, I constantly look for instances where I can exploit those ideas in an action, which will give me an image. Constant moving images, irrespective of the story, is a fertile ground,” Rajamouli continues. “And that ground keeps getting fertilized. So when I get the story, I have a nice seed which I plant, and eventually, it grows out into a tree.”

However, on this topic of viewing real life through a cinematic lens — or, vice versa, bringing reality into cinema — Rajamouli subscribes to a firm separation.

“Reality is how I lead my actual life. Filmmaking is my profession. So, I tend not to mix both of them,” he says. “Usually, I don't make reality. My storytelling inherently has a kind of fantasy. Currently, it has a kind of fairy tale setting and characters, but with stronger emotions.”

Strength of emotion and spectacle generally drives the kind of movies Rajamouli enjoys. He has cited the Biblical epic Ben-Hur as the film with his favorite use of sound, and among more recent releases, he also cites recent Malayalam-language Indian crime thrillers like Dijo Jose Antony’s Jana Gana Mana and Jeethu Joseph’s Drishyam 2 as works that stuck with him. However, the subject of recent favorites immediately shifts towards Top Gun: Maverick and Tom Cruise, arguably Hollywood’s last big action A-lister, and someone who makes death-defying stunts as much of a draw as stories or characters.

“The visuals are extraordinary,” Rajamouli says of Joseph Kosinski’s sequel — for which Cruise insisted that he and his younger co-stars learn how to pilot F/A-18s for real, resulting in visceral dogfight sequences shot in the close quarters of their cockpits. The proof is in the pudding. Maverick flew past all box-office expectations with a nearly $1.5 billion haul, and stronger theatrical legs than most recent studio films (like RRR, it also enjoyed a big-screen re-release just months after its debut).

But as alluring as Top Gun: Maverick may be, it has something in common with RRR other than audiences falling in love with its action. Given its pro-U.S. military outlook and Department of Defense contract — one of the ways studios can cheaply use military equipment is in exchange for script approval. Even Marvel isn’t immune, and Maverick has been labeled propaganda, including by many who enjoy it (the same can be said of Tony Scott’s original). Although RRR has no such government contracts, its imagery has faced similar accusations.

The director has seldom spoken on the subject of propaganda — in one interview, he merely said he had “no political agenda” — but he opened up about his feelings towards these criticisms after speaking on the topic in relation to Top Gun: Maverick. According to Rajamouli, there’s no financial incentive for Hollywood studios to change their current mode of making military-centric movies.

“Ultimately, a filmmaker makes a movie which attracts an audience,” he muses. “But if the people who feel that it's propaganda increases so much that the collections of the films are getting affected, then obviously the filmmaker will feel, ‘Okay, I'm not reaching my target audience, then I need to look at where I'm going wrong.’

“The same thing happened with my films,” he adds. “They were criticized a lot for being propaganda films, or male chauvinistic films. I hear those voices, but as long as I’m reaching my target audience, who come to watch my film, paying their hard-earned money, giving their time, I keep making the movies that I make.”

“My stories are pretty simple and pretty straightforward.”

Artistic intent, however, is rarely the final arbiter of a movie’s reception, and films like Maverick and RRR enter environments that are already highly politically charged. This has led to responses that Rajamouli has found surprising on occasion.

“It happens in both good ways and bad ways,” he says. “There are also people who take so much good from a scene where there is nothing good. It’s just a simple scene, but people perceive that it has got a lot of messages. ‘It's such a beautiful, wonderful thing,’ which I didn't intend to do. The same way when I didn't intend anything wrong, people criticize so much about it, and entangle things into one another, and make them complicated. I don't make complicated films. My stories are pretty simple and pretty straightforward.”

Perhaps there’s something to be said about how walling off reality from fantasy can result in images that may have been innocuously conceived but slot right into an unsavory status quo. Rajamouli has, during the release of his 2017 hit Baahubali 2: The Conclusion, been previously criticized for racist optics, as well as casteist comments he made years earlier. However, he doesn’t entirely reject criticism of his images.

“I make a note of it and go forward. ‘Okay, people can think this way too.’ It’s a kind of input: there are also people around who perceive a scene or a story or a character in a certain way. I get the information into my head and move along,” he says.

But online responses aren’t the primary way Rajamouli listens to feedback. “I go around, I see my films with the audience,” he adds. The audience’s critical feedback loop is a process which, Rajamouli claims, he’s been participating in since his very first film, Student No. 1, in 2000 (RRR is his 12th feature). “I try to understand how they're perceiving the film as they are watching it. That is very important to me. I give it the maximum credibility to that experience.”

The future of cinema

A champion of the big-screen experience, Rajamouli’s hope for 2023, with regard to audiences’ relationship to moving images, involves finding ways to get younger viewers into theaters. According to the director, the prevalence of alternate forms of entertainment, from gaming to streaming to personal devices, poses a challenge, but there are also avenues to re-capturing people’s attention.

“I am a little bit scared the newer generation are not as attracted as we were to cinema,” he says. “So I would probably think about how we can reinvent not just filmmaking, but the cinema-going experience in general.”

However, with the ongoing rollout of James Cameron’s long-awaited Avatar: The Way of Water, it may not be long before Rajamouli gets his wish. The film, he says, left him “astounded.”

“It's a fantastic achievement, to make people get completely lost in a world.”

While Rajamouli fancies himself more of a feeler than a thinker, he walks back that statement when discussing Cameron’s sequel.

“If I go to any movie, I’ll be looking at, ‘Okay, what is the story? What is the character?’ The filmmaker in me inadvertently keeps thinking,” he says. “It’s a small part of the brain, but it was completely shut off. I was just transported into the world, and going along with the characters. I was pulled into the movie. I need to watch it a second time to be critical about it. But I think it's a fantastic achievement, to make people get completely lost in a world.”

Some might say RRR does the same, at least for viewers unaware of its political implications, or those willing to set them aside, for better or worse. Either way, the landmark cinematic experience is far from done with finding its audience. U.S. distributors Variance Films announced a weeklong holiday season run in New York for free ending December 29. A fitting way to end a year of memorable movies, but one that ultimately belongs to Rajamouli.