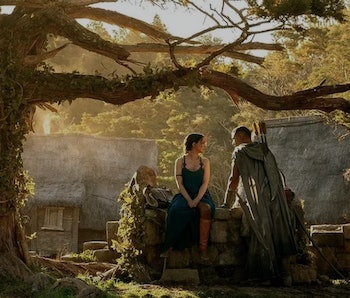 The last we saw of the Southlands village healer Bronwyn, she was telling Elven princess warrior Galadriel that she and her neighbors would seek shelter in “an old Númenórean colony by the mouth of the Anduin.”

“Pelargir,” she adds. After the Second Age, Pelargir is integrated into the Kingdom of Gondor, which Lord of the Rings fans know is one of the most important locations in Middle-earth. Presumably coming with her on this Season 2 journey to Pelargir are her son, Theo (Tyroe Muhafidin), and her forbidden Elven lover, Arondir (Ismael Cruz Córdova).

Ismael Cruz Córdova, who plays Arondir, is trying to throw Rings of Power viewers off the scent.

“I have very few details about who’s coming back or not coming back or how they’re coming back,” he said in an interview with Esquire. Well, we’re calling him out. While The Rings of Power technically doesn’t need Arondir to advance the plot and move all the Southlands refugees to Pelargir, Arondir and Bronwyn’s relationship will exemplify why Pelargir becomes such a special place.

In Tolkien’s writing, Pelargir becomes the top destination for the Faithful fleeing persecution. The Faithful were a minority faction in Númenor that preserved their ancient friendship with the Elves, respected and even worshipped the Valar, and used Elven tongues. Opposing them was King Pharazôn, who had the backing of the majority of Númenórean society and felt snubbed by the Valar for not being gifted immortality. Soon, these Númenóreans became seduced by Sauron.

The consequences of pledging loyalty to Sauron and turning their back on the Valar were catastrophic. Meanwhile, the Faithful had been building up Pelargir little by little, eventually transforming it into a bustling city before beginning to populate the surrounding region as well. After Númenor’s fall, hundreds more arrived on ships, including Elendil (Lloyd Owen) and his son, Isildur (Maxim Baldry), the most prominent leaders of The Faithful.

Amazon is taking creative liberties in making the Southlander’s migration to Pelargir part of the city’s origin story. Bronwyn and Arondir’s relationship becoming public, and the Southlanders’ reception to it, may be a key factor in determining whether most of them will stick to the journey to Pelargir, which is friendly toward Elves and likely tolerant of mixed relationships.

Will the Southlanders accept Arondir as a member of their village, or will most of them continue to hate “the pointy ears?” Arondir and Bronwyn’s relationship could flourish into a beautiful B-plot about love and acceptance amid a difficult resettlement process.

We’re hoping that Ismael Cruz Córdova does stay on for Season 2 of The Rings of Power to help tell that story, but we likely won’t know for sure until 2024.

The Rings of Power is available to stream now on Amazon Prime Video.