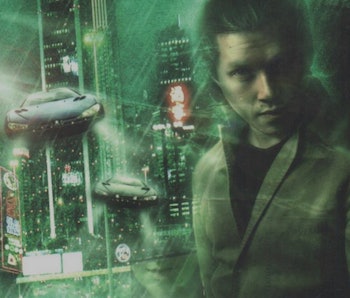 Richard K. Morgan, author of Altered Carbon, the 2002 cyberpunk novel that was adapted for the brilliant Netflix TV series (Season 2 dropped on February 27), was the first-ever guest on the Inverse sci-fi happy hour this week, and he chose something very appropriate to read for our current global moment.

Morgan took the opportunity to read from Broken Angels, his second novel, starting at the beginning. "It takes place in a hospital in the midst of a war context. It's cheery stuff, indeed," he says.

He also took a few questions about the role of sci-fi in these increasingly science non-fiction times, how he worked with Netflix writers in Los Angeles, "essentially just spinning up cool sh*t" for the TV version of his book.

Morgan also recommends some excellent new reading for anyone cooped up inside: Neon Leviathan, a collection of short stories by T.R. Napper is his current fave. “It’s got that really hard-edged cyberpunk feel to it. The best short story collection I’ve read for quite some time," Morgan told Inverse entertainment editor Jacob Kleinman.

Below are a few more highlights from Sci-Fi Happy Hour:

On adapting his own book into a show...

[Altered Carbon Season 2] really isn’t an adaptation of Broken Angels. It borrows from it; it takes a bunch of the cool stuff. It’s very much got its own trajectory. Even at the end Season 1, the story was already starting to diverge from where the book had gone so their launch point for Season 2 is a lot different than the launch point that I had when I was writing Broken Angels. I on’t honestly think you could call it an adaptation. It’s a borrowing if you like. But they’ve also mixed it up with a bunch of stuff from the third book, Woken Furies.

In terms of the writer’s room, I spent time out there, essentially just spinning up cool shit. That was my job — to go there and help with the cool shit angle. It was brilliant. I had a really great time. They had a bunch of really talented people. You’re in a room full of people throwing ideas around and it was great. I spent about a week out there.”

As I was watching Season 2 I was delighted to see some of the things they’ve held onto, like the interface guns with the palm panels that can call the gun from across the room.

On what value sci-fi can bring the world...

Over the last ten years or so, science fiction has really become the only fiction that addresses the real-world context anymore. In a real extent, we live in science fictional times. In order to address the contemporary context, you’ve pretty much got to be writing science fiction.

You’re seeing this increasingly with a lot of literary writers. They are turning out science fiction. They are writing stuff that has that science fiction vibe to it. In that sense, it is not so much what we can bring to it, it’s a case of, ‘we already took the place over, what do we now do?’

On whether he'd rather be an android with a heart or a human without one...

Increasingly we’re beginning to work at the nano level, so rather that build things, we’re starting to grow them, or print them out if you like.

The issue of being an android or a human, it’ll be like Blade Runner. The two will be indistinguishable; it will be hard to tell one from the other.

A huge thanks to Morgan for joining us!!

More like this
Science
Jan. 14, 2023
Did Minority Report predict our current reality?
By Tara Yarlagadda
Entertainment
Jan. 28, 2023
Last of Us Episode 3 release date, time, and trailer for HBO's zombie show
By Claire Fox
Entertainment
Jan. 23, 2023
The Last of Us Episode 2’s biggest change to the game is also the scariest
By Dais Johnston
LEARN SOMETHING NEW EVERY DAY.
Related Tags
Share: