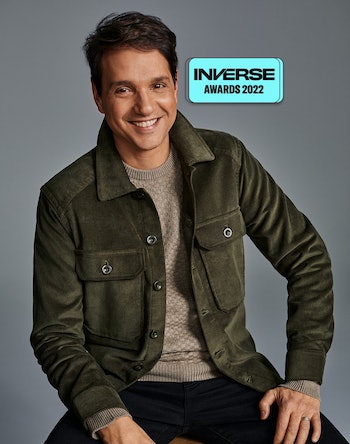 In 2022, Ralph Macchio finally got his revenge.

In the climactic final episode of the fifth season of Cobra Kai, a three-decades-later sequel to the hit film that forever made Macchio the Karate Kid, an older and wiser Daniel LaRusso took on his onetime-mentor-turned-tormentor Terry Silver (Thomas Ian Griffin). And won.

“If you were to ask me 20 years ago if I would ever do a show called Cobra Kai and have a fight scene with Terry Silver, I would say, ‘You’re out of your mind; that’s never going to happen,’” Macchio tells Inverse.

The last few years have been good for the Karate Kid thanks to Cobra Kai, which started as a YouTube original before migrating to Netflix, where it found a dormant and passionate fanbase. But in 2022, there’s sudden talk of spin-offs and a full-blown Karate Kid Cinematic Universe.

On top of that, he’s also got a new memoir, Waxing On: The Karate Kid and Me, which takes fans behind the scenes on the Karate Kid movies, along with other chapters in Macchio’s career. Inverse spoke to Macchio about his book, the future of Cobra Kai (he both stars and serves as an executive producer), and a My Cousin Vinny mistake that made it into the final cut.

The interview has been edited for brevity and clarity.

In Waxing On, you write that when you first read the script for Karate Kid, you thought some of it was corny, especially the high school stuff. How have you tried to correct that in Cobra Kai?

I need to preface this: I am involved creatively and collaboratively with the stories in Cobra Kai, but I don't write the show. The showrunners and the writing staff do that. So they really have a handle on enhancing these characters and these teen characters.

But the teen stories of the ’80s there was a little bit of a glossiness to them. Where today, it’s a little more grit and honesty — even though the Cobra Kai universe gets a little heightened. There was a black and whiteness to The Karate Kid, especially in the teen storylines, where all the blond kids from California beat up the Jersey kid. And everybody was sort of a little stereotypical, which was, in essence, how a lot of those movies in the ’80s were.

So to answer your question, I don’t have my hands on creating those two storylines now, but I do like the direction that they go. And the actors that we have are just so terrific.

In your book, you also say you originally didn’t like the title “Karate Kid.” Have you come around to it since then, or do you prefer Cobra Kai as a title?

When I first heard it, I thought “The Karate Kid” sounded like an after-school special or a cartoon. It didn’t sound like a movie that was going to be made by the man who made Rocky. As a matter of fact, he called it the “Ka-Rocky Kid.” John Avildsen, our director, we always joke about that. Interestingly enough, it’s the perfect title because it is stuck. Jerry Weintraub, the producer, would always say, “It’s a terrible title, which makes it a great title.”

Cobra Kai is interesting. If you asked me 10 years ago would I ever be in a show called Cobra Kai, I would say, “No way in hell. That’s never going to happen.” The Cobra Kai are the bad guys, and it’s kind of funny that Cobra Kai has become its own brand. Even before the series, a lot of people knew Cobra Kai just based on the influence of The Karate Kid. So it’s another perfect title for totally different reasons.

Is there anything you can share about Cobra Kai Season 6?

There’s nothing I have to offer official yet. I wish I did. You know, obviously, when you’re in between seasons, you want to know you have your next thing lined up. We’re confident because of how well the show has been received, and Season 5 was really well received.

The guys who write the show have a lot more left in the tank. But it’s show business. So we have to wait to find out what the business end is from the Netflix of it all.

You mentioned the “Cobra Kai Universe,” and there’s been some talk of spin-offs recently. Is that something the team is seriously discussing right now?

I think that it can go on. You get a feeling when you overstay your welcome. And I think there are other areas. I’ve always wanted to see a Miyagi origin story. Who was that person before we met him in 1984? That would be an interesting and dramatic story.

Back when Season 3 was coming out, I asked whether you think How I Met Your Mother helped bring Karate Kid back into the popular culture since Barney Stinson [Neil Patrick Harris’ character on that show] was obsessed with your co-star William Zabka. So my question is: Do you think Harris could ever play a role in the Karate Kid Universe?

I’d be wide open to it in some way. I don’t know if it would ever be as Barney Stinson, but listen, Hayden Schlossberg and John Hurwitz wrote Harold and Kumar Go to White Castle, and that was a big break for Neil Patrick Harris in sort of breaking the Doogie Howser of it all. And so they know Neil, and it would just be a matter of “OK, how can we do this and move this story?” And that would be awesome.

Anyone who comes on board that is a fan or supportive, it’s just so great to have all these actors knock it out of the park.

Your book also covers some of your other movie roles, including one of your best: My Cousin Vinny. Are there any behind-the-scenes stories from that movie you can share?

Yeah, that movie. That’s a late-for-dinner movie, as I write in the book. If it’s on TV, you’re going to be late for dinner. You can’t turn it off.

There are plenty of interesting stories. When I looked at Fred Goodwin, that was his last performance as the judge, and then Joe Pesci, just watching the camera department hold both of those guys in the same frame. One substantially taller than the other. I always enjoy watching them figure out how to do that because I think they were 2 feet in height apart.

The most fun is Austin Pendleton as the stuttering public defender. If you watch that scene again where he’s presenting his defense, look at me, Joe Pesci, and Mitchell Whitfield. We are just cracking up. We cannot hold it together. We’re out of focus, but if you look in the background, you just see our shoulders bouncing up and down.

You were almost in Running on Empty. Were there any major what-if moments in your career?

I remember reading the script for Rain Man. I remember even talking to John Avildsen, who directed The Karate Kid. He had read that script. I think he considered directing it at one point when it crossed his desk. But the Tom Cruise role was pretty sought after. I never got to audition. It never went anywhere. But that was one that I said, “Boy, that’s such a beautiful script.”

Before we go, is there anything else you want to say about Waxing On?

For me, the book is a celebration of this film, this role, my life walking in the shoes of this character, how unique that’s been, and how the fans never let it go away. So it’s sort of a tribute to all of that and a lot of never-before-told stories behind the scenes over almost four decades. I think now is a great time for that. So I hope folks check it out.

Waxing On: The Karate Kid and Me is available now where books are sold. Cobra Kai is streaming on Netflix.