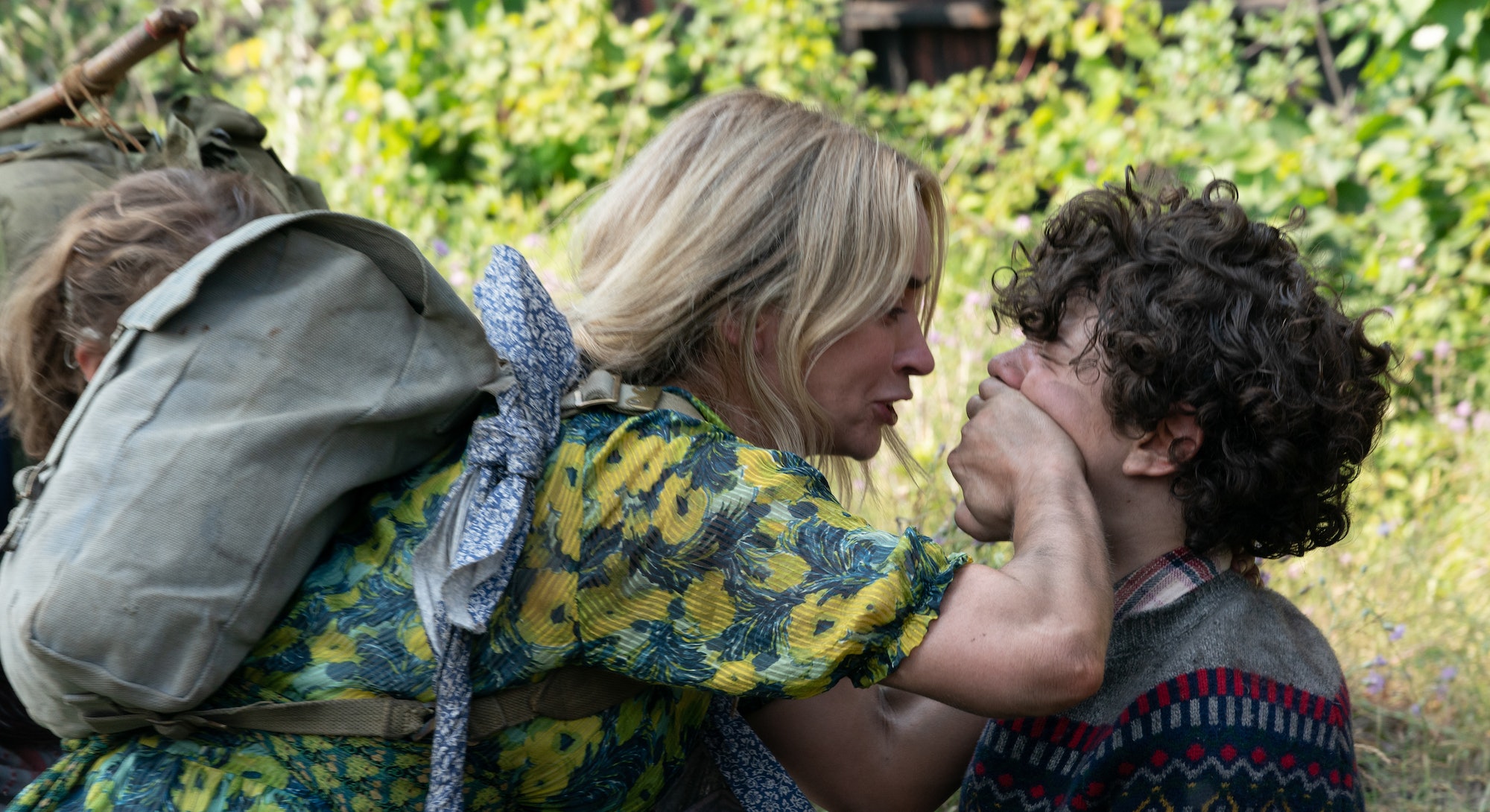 This time, it’s very loud in the beginning.

It’s the slamming doors, the roaring engine of a pickup truck, the TV news, and a neighborhood baseball game. Soon, the noise of daily life is replaced by panicked screaming, prayer, car horns, and the thundering blasts of shotguns. It’s the apocalypse.

A Quiet Place Part II, opening May 28, has a different introduction than the memorably hushed beginning of its 2018 predecessor.

Maybe that’s because the same tricks from three years ago no longer cut the mustard. Director John Krasinski seems to know this, so he pumps up the volume during the prologue of his killer alien/god sequel.

Now, there is more sound and more dialogue. Krasinski hasn’t gotten lazy with his rules. Like its characters, A Quiet Place Part II looks outward to new ground, far away from the comforts of home.

According to Box Office Mojo, there have been 75 movies released (some are re-releases) in theaters this year. A Quiet Place Part II is the first worth seeing in theaters.

A Quiet Place Part II is full of artistic intention and technical prowess, but what makes it unique is the timing. The sequel was pulled from theaters days before its March 18, 2020, release. It’s a time capsule of sorts, made more potent after a year of our own quiet place.

Though the sequel was written, shot, and completed before the pandemic, its somber tone and apocalyptic setting reverberate even more loudly today, long after the disease that jumped to humans from animals shut down the planet.

A Quiet Place II claims a sturdy enough story about togetherness in the face of danger that offers an extremely satisfying continuation of the first movie’s imaginative concept — a concept that might’ve been one-and-done had it not been so successful.

This post-apocalyptic world expands just enough to reveal new threats and allies without revealing anything more about the monsters — beyond one new weakness.

It’s a stretch to call A Quiet Place Part II a wise movie, but it is clever. At a lean 90 minutes, Part II is made up of tightly constructed set pieces that weaponize the medium’s many tools to crank up the tension. (A recurring bit involving depleting oxygen is a pretty cheap way to leave an audience, um, breathless.) The actor Djimon Hounsou, who exudes on-screen gravitas, finds himself in a thankless role, and it’s one of the movie’s more baffling choices — but there’s still plenty that’s worthwhile here.

After seeing the sequel, I can say A Quiet Place Part II avoids the trappings of other surprise hits that spawn franchises. It is one of the most uncomfortably tense movies of the year, suffocating the viewer until it allows for merciful gasps for air. We’re fooling ourselves into thinking Covid-19 is completely over, but A Quiet Place Part II offers a little catharsis, perhaps the most memorable opportunity for it in a long time.

Aside from its prologue that offers hints of how this all happened, A Quiet Place Part II picks up moments after the first one ended. With their home destroyed, the surviving Abbott family — mother Evelyn (Emily Blunt), daughter Regan (Millicent Simmonds), son Marcus (Noah Jupe), and a nameless newborn — brave the outside world, hoping to find a new home. They soon find Emmett (Cillian Murphy), a friend of the Abbotts and the lone survivor of his own family.

True to Part II’s nature as a next step, Emmett is nothing like Krasinski’s caring patriarch Lee, who returns as a ghostly memory in the prologue. Unlike Lee, Emmett is cynical and distant. Without his family, he’s ready to die. And then the Abbotts step in. He struggles to converse with deaf Regan and is unwilling to cooperate with what he believes is a foolish plan: to find other survivors after she comes across an active radio signal. (A loop of “Beyond the Sea” by Bobby Darin that will trigger flashbacks for any BioShock fans.)

This pairing — an endlessly watchable Murphy and an increasingly promising Simmonds — is a pseudo surrogate father relationship that epitomizes Part II’s biggest ideas. Where A Quiet Place was about family, Part II is about community. Though a family can have its own set of conflicts, a community in an apocalypse is more critical and full of more unknown quantities. Trust is in high demand but always short in supply.

Apocalyptic hits like Lost, The Walking Dead, and The Leftovers all mined this tension. Despite being a full-blown movie, A Quiet Place Part II is a smaller-sized meditation on those same difficulties.

Where A Quiet Place was about family, Part II is about community.

A year ago, these themes might have come across as needless. But now, it feels like a blaring siren. After Part II was delayed last year, the world was tasked with cooperation to overcome the pandemic, a challenge we unquestionably failed to overcome.

(It’s especially bizarre when you remember Krasinski himself saw an opportunity with a low-fi feel-good “news” show made out of his Brooklyn living room. He later sold Some Good News to Viacom. As of May 2021, there are no plans to move forward with a fully produced Krasinski news show.)

A Quiet Place Part II isn’t about diseases or vaccines, thankfully. But it’s absolutely a warning about how delicate our comfort is when we arrogantly believed we’ve escaped danger.

That message carries a much stronger power than it would have a year ago.

A Quiet Place Part II evolves past its predecessor’s concept to develop twists that make it a worthy trip back to the movie theater.

The mythology of monsters isn’t where the Quiet Place franchise excels. It’s never about the monsters. It’s about us. And that’s where A Quiet Place Part II is loudest.

A Quiet Place Part II opens in theaters on May 28.