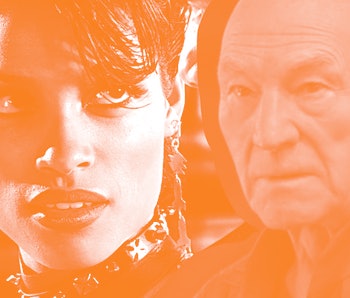 While Star Wars fans wait for official confirmation that Rosario Dawson (Sin City, Daredevil) will play former Jedi Knight Ahsoka Tano in The Mandalorian Season 2, the actress has been talking about a different sci-fi franchise — Star Trek. In a new interview, Dawson fan-casted herself into the Trek franchise and explained exactly how she could appear in both Picard and Discovery.

Her idea is fantastic. Though she's not involved with Trek in an official capacity and remains unconfirmed for Star Wars, Dawson's proposal would be a fantastic way to link Picard Season 2 with Discovery Season 3. She's also suggested a great way to bring back a fan-favorite Next Generation character without being cheesy. Here's why her off-the-cuff fan theory should be taken very seriously. Speculation ahead.

In a new interview with Variety, Dawson said of her role in The Mandalorian: "That’s not confirmed yet but when that happens, I will be very happy. I’m very excited for that to be confirmed at some point."

Dawson also had a pitch for how she could appear in Star Trek, specifically both Picard and Discovery. She would play Q, that omnipotent trickster space god who made trouble for Picard on The Next Generation, dropped in on Sisko for one Deep Space Nine, and bothered Captain Janeway on Voyager.

"I mean it would be great ‘cause then I could jump on Discovery. I could be on Picard’ I just want to be with Jean-Luc Picard,” Dawson said.

This is a smart fan pitch. Even if Dawson didn't play a rebooted version of Q, the idea of casting someone new as the character and using them to bridge the gap between Picard and Discovery is brilliant.

A new Q is a tasteful nostalgia deep-dive

Let's face it, if Q is immortal, bringing back John de Lancie as an "older Q" would be a little strange. Yes, we accepted that he looked older on Voyager than he did in The Next Generation, but even that was two decades ago. But bringing back the character as another actor allows the showrunners to reinvent the concept of Q and the entire Q Continuum.

Q could fill in the Discovery Season 3 timeline gap

If Q appeared on Discovery Season 3, we could learn more about what happened between the end of Picard and the beginning of Discovery Season 3. At the end of Discovery Season 2, the ship and crew jumped 930 years into their future, which will put them in the year 3187. Burnham will face a transformed galaxy in Discovery Season 3, and it's possible Starfleet and the Federation may no longer exist. So how did everything change? If you had Q jumping between Picard Season 2 and Discovery Season 3, you'd literally have a character who had all the answers. This doesn't mean a new Q would lay all that info out, but the fact that they had it means great clue could be doled out in each series, which would make for satisfying narrative connective tissue.

In the time-skipping TNG finale "All Good Things..." Q nearly revealed tantalizing information about something in the future. Before whispering some secret into Picard's ear, Q stopped himself and simply said, "You'll see..." Now that we're exploring the future of old-school Trek in both Picard Season 2 and Discovery Season 3, some of those secrets could be revealed. Q kind of already knows Picard's future, which could extend to the rest of the Federation, too.

In theory, Jean-Luc Picard has some secret knowledge of the USS Discovery, and maybe Q could help him figure it out. In The Next Generation episode "Sarek" Picard had a mind-meld with Spock and Michael Burnham's father, Ambassador Sarek. Later, we saw Picard exhibit deep emotional outbursts connected to these memories, which included the long estrangement between Sarek and Spock. Later, in "Unification," Picard mind-melded with Spock.

This means Picard has briefly merged his memories with two people who have top-secret information about the USS Discovery. Assuming these memories are a little muddled, it's reasonable that a time-hopping being like Q could help Picard bring these memories to the surface.

After all, it's happened before. In "Tapestry," Q helped Jean-Luc relive his memories from his days as a recent graduate of Starfleet Academy, and it turns out, the way Picard remembered all of that didn't check with reality. If a new version of Q chills with Jean-Luc in Picard Season 2, it seems very possible our favorite former starship captain could have some pretty rowdy epiphanies about a certain missing starship from 2257.

Discovery Season 3 will debut sometime in 2020.