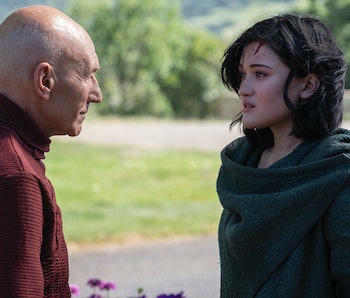 Dahj's tearful arrival at Jean-Luc's vineyard is one of the most memorable early moments of Star Trek: Picard. Ahead of the DVD and Blu-ray release of Season 1 on October 6, Inverse has an exclusive, behind-the-scenes look at the creators' commentary. Reflecting on this scene in "Remembrance," the producers offer a glimpse into the meticulous planning that helped make this encounter shine. It's an especially impressive performance by Isa Briones as Dahj, given that this was the very first scene she shot for Picard.

You can check out the clip below:

As Executive Producer Alex Kurtzman points out in the clip, the meeting between these two central characters was crucial to get right. "Their entire relationship basically gets established in three scenes total, and and really these first two. Then we rip the rug out from everybody, and that's a very tough thing to do," he explains.

Co-creator and EP Michael Chabon points out that this was Briones' first scene of the season, truly throwing the newcomer into the pool at the deep end. Despite those daunting circumstances, her performance rose to the occasion.

"We pulled her out of the traveling road company of Hamilton, where she was playing the youngest of the three sisters. I don't know how much work she'd ever done on-camera before, but nothing like this," Chabon chuckles. "We just put her in a costume and dropped her in front of the one of the greatest actors of this generation."

"I remember her audition, and there was that quality to her that just comes through the camera," says the episode's director, Hanelle M. Culpepper. "She just has a face you can't look away from — there's a vulnerability to her."

The DVD and Blu-ray release includes all 10 episodes of the debut season, plus the prologue story from Short Treks, "Children of Mars." The collection also features a hearty helping of bonus material for all you lorehounds out there. These include: