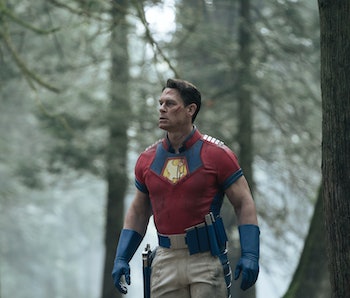 One could say, Peacemaker, when all was said and done, did indeed bring peace. But at what cost? Season 1 of James Gunn’s popular DC Extended Universe series came to an end on Thursday, and the near 45-minute episode was a roller-coaster ride filled with epic fight scenes, oddball humor, and an insane world-saving mission. Suicide Squad, much?

Spoilers for Peacemaker Episode 8 ahead.

Episode 8 earned its title, “It’s Cow Or Never,” as Project: Butterfly finally attacked the Butterflies on their turf. Peacemaker and Task Force X succeeded at eeking out a victory. But some battle scars run deeper than others. And not everyone is okay.

If it’s closure you wanted, closure was definitely delivered. Some story loops were tied in the episode, but more questions lingered. Given HBO Max’s recent decision to renew the show for a second season, leaving some narrative bread crumbs is a move that totally makes sense.

So, who dies, who survives, and who makes a cameo appearance in the Peacemaker Season 1 finale? But most importantly, what does it all mean for Season 2? Enough with the small talk, let’s get into it.

All roads led to an ominous-looking barn in the middle of nowhere. This is where the stand-off between Peacemaker (John Cena) and his Task Force X crew took place. And rest assured, the dreaded Butterfly invasion was indeed thwarted — thanks to a few tricked-out helmets, some surprise bravery by John Economos (Steve Agee), and Adebayo’s (Danielle Brooks) surprise move to aid Peacemaker on his mission to take down the cow.

After Economos did his best Butterfly impression to infiltrate the barn and plant one of Peacemaker’s helmets, the team was able to detonate multiple sonic booms, decimating the structure and debilitating many of the enemy’s reinforcements, sending their beloved cow (which, if we’re being honest, is more like a gargantuan space worm) into a panic. If the Butterflies can’t transport their goo-making beast to a safe location, it’ll perish. And if that happens, so will they.

This was the plan. And while Harcourt (Jennifer Holland) and Vigilante (Freddie Stroma) flex some serious battle chops on the field, both are wounded. Possibly, mortally. Seeing Vigilante down and Harcourt bleeding out, Adebayo steps up, telling Economos, “I was made for this,” before heading into the fray with guns ‘a blazing.

Peacemaker went into the barn on a one-man mission to destroy the cow, but he went radio silent. Armed with his human rocket helmet, Adebayo ventured in for the rescue. What she found was Detective Song (who is still possessed by the Goff Butterfly) bartering with Peacemaker. Instead of fisticuffs, Goff tells him of their alien pact to save humanity from itself. They share a moment, with Peacemaker shedding a tear as he thinks back to his own childhood trauma. Will he pledge allegiance to their plan like Judomaster did before him?

Short answer: No. Instead of buckling to her whims, Peacemaker activates the human rocket helmet, which is still on Adebayo’s head, and sends her barreling directly into the cow’s chest. He shoots Detective Song, the rest of the Butterflies are taken out, and their mission of saving the world is a success.

Vigilante was able to walk off the battlefield, but the same couldn't be said for Harcourt. With the assistance of Peacemaker, who carries her to safety, the group makes their exit to a hospital for further medical care. Vigilante may have carried himself all this way, but once they’re surrounded by doctors and nurses, his injuries get the better of him, and he passes out due to all the blood loss.

Things come to an end with our heroes on the mend. Harcourt’s injuries were the worst of the bunch, and the episode’s final montage shows her undergoing physical therapy to get her strength back. After all, you’ve gotta learn to walk before you can pummel evil-doers in the face.

Going into the final episode, rumors swirled around the possibilities of big-name DCEU characters making an appearance. Dwayne Johnson’s Black Adam did not show his face, but we did get a little Justice League goodness.

As they left the Butterfly carnage behind them, the gang passed Aquaman, The Flash, Wonder Woman, and Superman, who stood at the perimeter looking battle-ready — with only Ezra Miller and Jason Momoa showing their faces.

As the group passes, Aquaman tells The Flash, “I’m so f**king sick of that rumor.”

One thing’s for certain: It’s not every day you see some Justice League superheroes dropping f-bombs left and right. Well played, James Gunn.

Aside from Murn (Chukwudi Iwuji), each member of Task Force X is still alive and kicking. However, it looks like the top-secret project’s future isn’t so definitive.

After Peacemaker tells Adebayo that she’s his best friend (aside from Eagly), she takes the mic at a press conference where she reveals Peacemaker’s innocence and points the blame at her mother Amanda Waller (Viola Davis) as the one behind all the chaos. Waller watches from her couch, obviously unhappy with the turn of events.

How the Peacemaker ending sets up Season 2

HBO Max announced on Wednesday, February 16, that Peacemaker will return for Season 2. We don’t know when, or what will happen — but the fact that this isn’t the last time we’ll see John Cena in that ridiculous super-suit is cause to celebrate.

And let’s be real here: Peacemaker has gone through a lot since the series began. He was put in jail for treason, fought a Butterfly, framed for murder, took down his father, and obliterated a giant space cow. If ever there was a person who needed a break, it was this guy.

In the finale, we find Peacemaker back at home in his trailer, relaxing with Eagley. As a potential symptom of his father’s demise and the unresolved trauma, Auggie Smith sits down on the step beside him. Auggie may be dead, but it looks like this trauma and Peacemaker’s inner turmoil surrounding his own insidious actions may be manifesting as his curmudgeon father.

What this all comes down to is that the Peacemaker we were introduced to in The Suicide Squad is no more. His father may have molded him into this super-patriot murdering machine, but as we’ve seen throughout these episodes, Christopher Smith is a sensitive man who cares about others. Auggie viewed that as a weak trait, and his constant abuse led Smith to accidentally murder his brother when they were kids. That sort of damage doesn’t just go away. Something tells us his dad will be around for a while, regardless of the fact that he’s dead.

We expect to see Peacemaker continue to deal with this trauma and likely a new high-stakes mission in Season 2. Will Amanda Waller get revenge on Peacemaker for turning her daughter against her? While it’s too early to say where the show will go next, we do know that Peacemaker Season 1 has reshaped an unlikable villain into a new hero.

More like this
Entertainment
5.12.2022 10:00 AM
How Watchmen uses time travel to explore the sinister cycles of racism
By Chrishaun Baker
Entertainment
5.9.2022 3:53 PM
'Moon Knight' star on becoming Scarlet Scarab and her dream Marvel team-up
By Aaron Pruner
Entertainment
7 hours ago
Why Moon Knight’s head writer refused to “go toe to toe” with Batman
By Eric Francisco
Related Tags
Share: