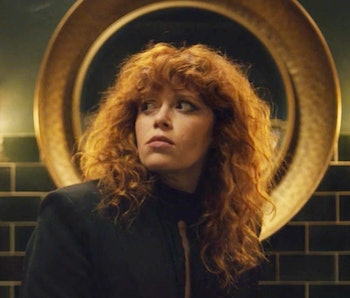 Palm Springs on Hulu was a delightful surprise for sci-fi fans. What at first glance looked like a no-holds-barred rom-com about two self-proclaimed dirtbags falling in love took a turn into actual science fiction, involved wormholes, quantum physics, time loops, and science experiments. Instead of Groundhog Day, it suddenly became Looper. If you enjoyed that aspect, try these eight movies, series, and TV episodes for the same kinds of wrinkling the time-space continuum.

Time loop comedies are always full of hijinks, but dramas in the subgenre can be more difficult to pull off. Before I Fall, an adaptation of the hit young adult novel, follows one teen girl as she lives the day of her death in a car accident over and over, slowly realizing the monotony of her life before the loop. It's a little bit Mean Girls, but played entirely straight. While this veers into Melodrama territory every now and again, it's an interesting use of the device nonetheless.

7. Star Trek: The Next Generation Season 5, episode 18, "Cause and Effect"

Otherwise known as "the one where Frasier shows up," this episode of TNG does feature Kelsey Grammer as another Starship captain, but the highlight of the episode is a time loop resulting in the total destruction of the Enterprise. Of course, that's not permanent and things rewind, but the crew has a sense of deja vu surrounding the whole ordeal. As they keep repeating the loop, Data has the idea to send a message to his future/past self in the next loop. It's good, clean, sci-fi fun.

What if there was a time loop in an alien movie? Wonder no longer, because that's basically the entire pitch for Edge of Tomorrow, a surprisingly great and complex sci-fi action movie starring Tom Cruise and Emily Blunt as two soldiers with the power to loop back at death and how they attempt to stop an alien invasion in a dystopian London. If you wish Terminator had even more time travel in it, this movie's for you.

Available on: Amazon (for rental)

The great thing about time loops are their versatility, and no show is more indicative of that than Looped, a Canadian animated kids' show entirely based on the premise of two boys living the same day over and over again. For this show, the goal isn't to escape the loop. In fact, the loop is what assures this show timelessness...the first episode and the last episode will have the same structure, because of the time loop. It just goes to show there is no genre that can't benefit from adding time travel.

Doctor Who is a show entirely about time travel, so it's surprising they havent used the time loop trope much in their 57-year history. When they do use it though, they go hard. "Heaven Sent" was probably the best episode of the ninth season, if not of Peter Capaldi's entire run, and it has an average rating of 9.8 on Rotten Tomatoes. Not bad for an episode that mostly features one actor running around in Cardiff Castle, but if there's one person you can trust to get out of a time loop in style, it's The Doctor.

A man trapped in a time loop has infinite possibilities to woo his dream woman. Sounds like an ideal romcom idea, right? Not in the Twilight Zone. In this episode of the classic anthology reboot, eternally Nice Guy Topher Grace plays Marc, who tries to charm Claudia, a young academic whose charmed by, and a little suspicious of, Marc's act. With this being The Twilight Zone, things go off the rails soon after, and the Love-in-a-causal-loop trope picked apart in Palm Springs is utterly obliterated by the end.

This British TV movie made on a shoestring budget seems to say everything that could be said about time travel. Starring nerd media mainstay Chris O'Dowd, this movie follows three friends in a pub as they write an open letter to Hollywood over drinks, only to discover a "time leak" in the men's bathroom, and an agent from the future sent to fix it, played by Anna Faris. From butterfly effects to postapocalyptic futures, this movies from 0 to 60 and back again, without ever leaving the pub.

Russian Doll is the last, snarky word on time-loop television. Created by Leslye Headland, Amy Poehler, and Natasha Lyonne, it takes the best parts of each: Headland's offbeat story stuctures, Poehler's humor, and Lyonne's dry delivery, and melds them together into not just a take on time travel stories, but a story of mental health, generational trauma, New York, and a cat named Oatmeal. It's a show you won't soon forget, whether it's the repetitive playing of Harry Nillson's "Gotta Get Up" or the snappy dialogue. Thursday again, what a concept!