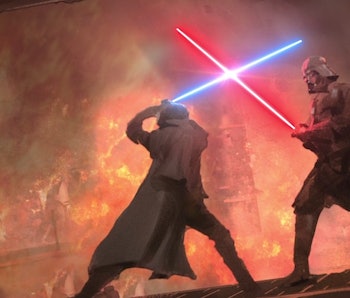 Obi-Wan is on the move. The teaser trailer for the upcoming Obi-Wan Kenobi series may not have contained any actual footage, but the concept art does give enough clues to fill a starcruiser.

As heavily implied by director Deborah Chow, Obi-Wan’s exile to Tatooine is “a starting place for our story... the interesting thing is where it goes from there.” And the concept art gives some big clues as to exactly where in the galaxy the show might visit.

During Disney+ Day, Lucasfilm officially revealed a short look at what to expect with Obi-Wan Kenobi. The segment is only available on Disney+ and is over one minute long. Again, we don’t see any footage, but instead, get some interviews with Ewan McGregor and Deborah Chow, who previously helmed some of the most thrilling installments of The Mandalorian.

Chow’s comments really make it seem like Obi-Wan might have reasons to leave Tatooine in this series. But where will he go? Here’s a breakdown of three locations Obi-Wan may go to in 2022. Speculation ahead.

The series might not go to Coruscant, but this concept art of some kind of marketplace gives off big Coruscant vibes, especially the lower levels.

Obi-Wan going to Coruscant seems like a pretty bad idea since that’s literally the seat of power for the Emperor, who as a Sith Lord, is trying to get rid of every single remaining Jedi. Still, maybe Obi-Wan needs to go back there for some reason. In fairness, Obi-Wan is probably more familiar with Coruscant than any other planet. Until the end of Sith, he lived there for most of his life.

In A New Hope, Princess Leia sends Tarkin’s spies on a wild-goose chase to Dantooine, claiming that’s the location of the Rebel Base. Later, we’re told that there was a Rebel Base there, but it has “been abandoned for quite some time.”

In the Star Wars timeline, Obi-Wan Kenobi happens around 10 BBY, meaning it’s a decade before A New Hope, and roughly the same time as Solo. This means early versions of the Rebellion may, in fact, exist. Those speeders in the concept art look very much like the “snowspeeders” from The Empire Strikes Back. But, as Empire established, those speeders were “adapted” for the cold.

So, will Obi-Wan hang out on one of the earliest Rebel bases? And if so, will he fly one of those speeders?

Because the trailer makes it clear that Obi-Wan and Vader may have another lightsaber duel, the location of the duel may — or may not be — Vader’s castle on Mustafar. While some of the concept art makes it look like Obi-Wan and Darth Vader are standing in front of lava, it feels odd if the second Obi-Wan and Vader duel happens at the same place where they previously fought.

Still, because we see two shots of what appear to be Mustafar and Vader’s castle, it feels like even if Obi-Wan doesn’t go there, we’re 100 percent going to spend some time on that spooky volcanic planet. If Obi-Wan himself does decide to take the fight to Vader, then a rematch on Mustafar could be amazing.

The only thing Obi-Wan needs to remember is obvious: That high-ground trick isn’t going to work again.