“She will be loved with us.” 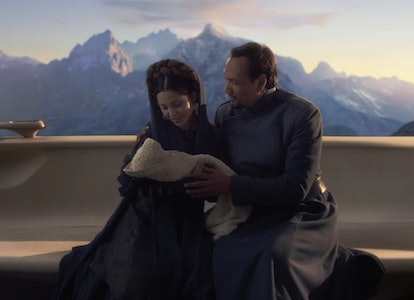 Star Wars fans have wondered about Luke Skywalker’s childhood under the watchful eye of his Aunt Beru, Uncle Owen, and, secretly, Obi-Wan Kenobi. Thankfully, it looks like these mysteries will be solved in Obi-Wan Kenobi, the upcoming Disney+ spinoff starring Ewan McGregor.

But there’s another part of the Star Wars story that isn’t in as high demand. While Luke may have been the center of the Original Trilogy, his twin sister Leia had an isolated upbringing too, albeit in a royal setting. Could we also get a glimpse of her upbringing, and of some of the first Jedi involved in the Rebellion? One rumor suggests just that.

Making Star Wars reported Jimmy Smits will reprise his role as Senator Bail Organa in Obi-Wan Kenobi. If this leak is true, it means great things for the series. First, while we’ll maybe see a young Luke, we could also see a young Leia.

But this rumor could also mean that we’ll get a glimpse of the first breaths of the Rebellion. Bail Organa was one of Padmé Amidala’s biggest supporters against the rising power of Chancellor Palpatine, and he even rescued Yoda during the Great Jedi Purge.

Beyond canon, Bail Organa has an incredibly rich lifestyle, even richer than a Senator. He also has a long history with Obi-Wan. In the Clone Wars novel Wild Space, written by Karen Miller, Obi-Wan and Bail Organa go on a mission to the planet Zigoola to track down a Sith holocron in the mysterious area known as Wild Space.

Aside from a possible flashback to a Bail and Obi-Wan buddy adventure, there’s another part of Bail’s life that could be a welcome addition to the Star Wars universe. The book I, Jedi introduced Ylenic It'kla, a Jedi Knight who belonged to the lemur-like Caamasi species.

Ylenic only appeared in I, Jedi through visions, but that isn’t where his story ends. In the roleplaying game Star Wars: The Force Unleashed, it was revealed that Bail Organa made Ylenic his personal aide on Alderaan in the years leading up to the planet’s destruction. We could see him in Obi-Wan Kenobi... at least until this unique Jedi perishes in the explosion of Alderaan.

They may seem like a minor part of the Star Wars saga, but imagine how intriguing a lemur-esque Jedi palling around with a young Leia could be, especially with the advanced special effects of modern television. If there are two things that never get old in Star Wars, it’s funky aliens and new Jedi.