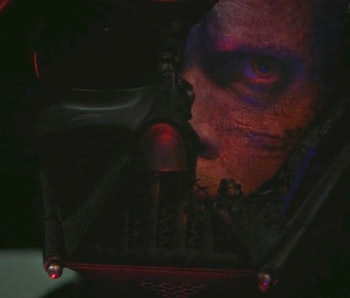 Unless you have a heart of stone — or you’ve turned to the Dark side of the Force — you probably cried at least once during Obi-Wan Kenobi’s fantastic finale. The Disney+ miniseries created new emotional contexts for both Ben and Anakin in ways even longtime Star Wars fans couldn’t have thought possible while also giving new characters powerful arcs of their own.

Having said that, there’s one odd element of plotting that crept into the Obi-Wan finale: the Force of Star Wars canon contorting the story into strange, contrived situations. Here’s how, in the shadow of its triumphs, the Obi-Wan finale got away with some absolutely bananas prequel-era plot holes. Spoilers ahead.

The final epic lightsaber duel between Ben and Vader happens specifically because Ben wants to get Vader away from the escaping refuges, which includes Leia.

Obi-Wan knows Darth Vader doesn’t really care about the people on the ship and decides to save them by getting Vader to turn his Star Destroyer and pursue him only. It’s heroic and brilliant and leads the show to an excellent lightsaber fight; perhaps one of the best ever.

But here’s the thing. Darth Vader did not need to take his entire Star Destroyer to go get Obi-Wan. Vader’s crony, the Grand Inquisitor, even tells Vader that taking the entire Star Destroyer off the mission is kind of dumb. In the moment, we’re meant to think Vader is making an error of strategy. But really, he’s making an error in logistics. Why can’t Vader take his own shuttle or his TIE Fighter and just follow Obi-Wan to that planet on his own? Surely, the Grand Inquisitor could handle the pseudo-Rebels.

If you think about it for two seconds or imagine a similar situation happening with Kylo Ren in the sequels, it automatically seems more realistic that Vader would take his own small ship and follow Obi-Wan. Vader bringing an entire giant Star Destroyer to follow Obi-Wan is really unhinged. Even for Vader.

Now, this plot point is defensible on the grounds that we’re supposed to think Vader has lost it at this moment, and the coda with Palpatine drives that home. Vader really let Obi-Wan get to him, so much so that he drove an entire Star Destroyer to go pursue Obi-Wan, only to jump out in a little shuttle and fly down to the planet anyway. This makes Vader like one of those people who speed toward a red light. They know they’re gonna have to stop, but they just need to drive like a maniac anyway.

But, none of this is why Vader makes this decision. The reason he steers his entire Star Destroyer to go get Obi-Wan is that Star Wars makes him do it. After all, we know for a fact that Leia needs to survive, which means the ship she’s on can’t get blown or captured by the Empire. For the rest of the story to happen, Vader has to act like an idiot in Obi-Wan Kenobi Episode 6.

This happens to all prequels in all genres and franchises, but it happened a lot in the Star Wars prequels, and it happened again here.

Revenge of the Sith redux

Nearly everything about the third act of Revenge of the Sith illustrates this funny Star Wars plotting tendency. After Obi-Wan and Yoda learn Anakin has turned to the Dark Side and is now murdering younglings, Yoda decides that he and Obi-Wan have to move really quickly to destroy the Sith. And, for some reason, Yoda decides that each of them should do this alone. Obi-Wan complains about his assignment, asking to take on Palpatine rather than be forced to fight his close friend Anakin. Yoda says no because... reasons.

This is great dramatic stuff and sets the stage for everything that happens in Obi-Wan Kenobi. However, it also makes no sense.

Why can’t Yoda and Obi-Wan team up to take out the Emperor and then go try to take down Anakin? Keep in mind that at this point in the story, Palpatine just sliced and diced like four Jedi while blinking, and Anakin murdered an entire temple full of Jedi. Seems like Yoda and Obi-Wan would want to increase their chances?

But they don’t. They go their separate ways to their separate lightsaber duels because — and this is crucial — the rest of Star Wars canon makes them. If Obi-Wan and Yoda were to team up and try to destroy Palpatine and then Vader, then they might have been successful! And if that happened, then nothing about the original Star Wars trilogy would make sense.

Obi-Wan and Yoda have to be isolated in their respective battles with Palps and Anakin for the specific reason that those fights have to both end the way they do in order for canon to work. With the exception of characters in the sequel trilogy, this is why most characters throughout the first six Star Wars films seem to have less agency than you might think, and are, in fact, ruled by their “destiny.”

Obi-Wan Kenobi did its best to mitigate this prequel curse by smartly focusing on the characters and the emotions, rather than the nitty-gritty details about starships and planets. And yet, it’s still called Star Wars. There are still spaceships and hyperdrives and various sizes and shapes and functions of all of these science fiction inventions.

So, when a very useful invention — like say, Darth Vader’s personal TIE Fighter — exists already, it’s natural that we wonder why he didn’t just hop in it. The real answer is, that the script can’t allow the Star Destroyer to keep attacking that ship, because 10-year-old Princess Leia can’t be dead for another six movies!

Maybe Vader was right. The ability to destroy a planet (or have a ship called a Star Destroyer) is insignificant next to the power of other stories with continuity you simply can’t touch. In Attack of the Clones, Anakin complained Obi-Wan was holding him back. But the only thing holding back Anakin in Obi-Wan is what Anakin has to do in the future.