“You're not the first Jedi to come through here.” 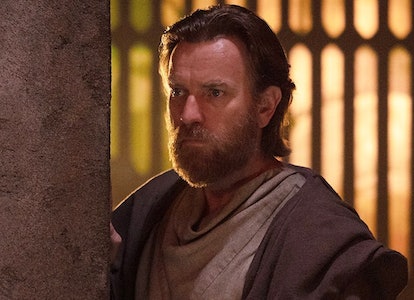 Obi-Wan Kenobi is the story of a fallen man fighting just to survive. In Part 3, Obi-Wan realizes he’s not the only one from the old days forced into hiding. Tala, an Imperial officer secretly rescuing Jedi, introduces Obi-Wan and Leia to The Path, an underground system of safehouses for the Force-sensitive.

While we don’t hear much about those who came before him, eagle-eyed fans have decoded graffiti to expose three huge characters who are now officially canon, and who we could see on-screen before this series is over.

As Obi-Wan examines the walls of the bunker, he remarks that “Quinlan was here.” Quinlan Vos was the only Jedi technically confirmed to be alive, but those willing to do a little homework discovered much more.

Armed with an Aurebesh alphabet for translating the galaxy’s most common language, fans were able to decode three names from the writing on the wall. None of them were established in canon before, but any of them could change Star Wars as we know it.

Though Patty Jenkins’ Rogue Squadron movie may be delayed indefinitely, a member of the team managed to sneak his way into canon regardless. One of the names on the wall translated to Valin Halcyon, a Jedi who changed his name to Hal Horn after the Great Jedi Purge to keep his identity secret.

Hal is best known for being the father of Corran Horn, a fan-favorite member of Rogue Squadron and a Jedi Knight himself. This could be our first glimpse of a film protagonist, or maybe a clue that we’ll see him encounter Obi-Wan along the Path.

Roganda Ismaren is one of the more obscure characters you could pull from Legends canon, but upon consideration her inclusion makes sense. Like Leia, Roganda is Alderaanian, and like Reva appears to be, she was a Jedi padawan who switched sides after the Purge.

Roganda chose to make her way in a post-Republic world by becoming a concubine of Emperor Palpatine, but getting caught in an affair made her throw herself at his mercy and train in the Dark Side to become his agent. Her inclusion on the wall may mean her life is very different in canon, but maybe the rest of the journey doesn’t go well for her.

Djinn Altis ran a denomination of Jedi who rejected the rules of the Jedi Council. His inclusion in the graffiti isn’t exciting because of who he is, but of who he taught. A Jedi named Callista Ming was mentored by Altis, and she later went on to fight alongside Ahsoka Tano, Captain Rex, and Luke Skywalker.

In fact, Ming went on to become young Luke Skywalker’s love interest. Maybe she’ll appear in Ahsoka’s spinoff series, or meet Luke through one of Mando’s sidequests. In the books, there was quite a bit of romantic tension between the two. Could we finally see Luke as the romantic lead he never got to be before?